Paul Krassner : My Encounter with Owsley 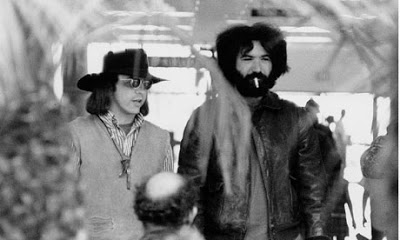 My encounter with Owsley

[Owsley Stanley, an iconic figure from the Sixties who gained fame as a producer of LSD and as a sound man for the Grateful Dead, died March 13, 2011, in an automobile accident in Queensland, Australia. Stanley supplied what Rolling Stone Magazine once called “the best LSD in the world” to Ken Kesey, Jimi Hendrix, and the Beatles, and, through his work with the Dead, revolutionized the art of rock and roll sound engineering. See The Guardian’s obituary after Paul Krassner’s article below.]

In 1967, there was a concert in Pittsburgh, with the Grateful Dead, the Velvet Underground, the Fugs, and me, playing the part of a stand-up satirist.

There were two shows, both completely sold out, and this was the first time anybody had realized how many hippies actually lived in Pittsburgh.

Backstage between shows, a man sidled up to me. “Call me ‘Bear,’” he said.

“Don’t you recognize me?”

“You look familiar, but–”

Fun fact: His nickname, “Bear,” was originally inspired by his prematurely hairy chest.

Now he presented me with a tab of Monterey Purple LSD. Not wishing to carry around an illegal drug in my pocket, I swallowed it instead.

Soon I found myself in the front lobby, talking with Jerry Garcia. As people from the audience wandered past us, he whimsically stuck out his hand, palm up.

“Got any spare change?”

Somebody passing by gave him a dime, and Garcia said thanks.

“He didn’t recognize you,” I said.

In the course of our conversation, I used the word “evil” to describe someone.

“There are no evil people,” Garcia said, just as the LSD was settling into my psyche. “There are only victims.”

“What does that mean? If a rapist is a victim, you should have compassion when you kick ‘im in the balls?”

I did the second show while the Dead were setting up behind me. Then they began to play, softly, and as they built up their riff, I faded out and left the stage.

Later, some local folks brought me to a restaurant which, they told me, catered to a Mafia clientele. They pointed out a woman sitting at a table. The legend was that her fingers had once been chopped off, and she’d go to a theater, walk straight up to the ticket-taker, hold up her hand and say, “I have my stubs.”

With my long brown curly hair underneath my Mexican cowboy hat, I didn’t quite fit in. The manager came over and asked me to kindly remove my hat. I was still tripping. I hardly ate any of my spaghetti after I noticed how it was wiggling on my plate.

I glanced around at the various Mafia figures sitting at their tables, wondering if they had killed anybody. Then I remembered what Jerry Garcia had said about evil. So these guys might be executioners, but they were also victims.

The spaghetti was still wiggling on my plate, but then I realized it wasn’t really spaghetti, it was actually worms in tomato sauce. The other people at my table were all pretending not to notice.

It was, after all, the Summer of Love.

“Thanks for enhancing it, ‘Bear.’”

[For years, Paul Krassner edited The Realist, America’s premier satirical rag. He was also a founder of the Yippies. The above was excerpted from the expanded edition of his autobiography, Confessions of a Raving, Unconfined Nut: Misadventures in the Counterculture — not sold in any bookstores; available only at paulkrassner.com and as a Kindle e-book.] 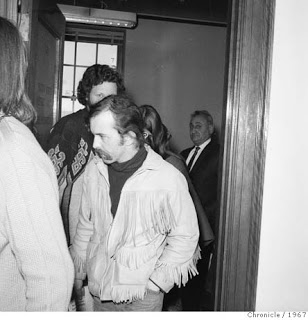 Owsley Stanley at his 1967 arraignment for LSD possession. Photo from the San Francisco Chronicle.
Owsley Stanley, 1935-2011:
Prolific LSD producer and
icon of the 1960s counterculture

The American psychologist Timothy Leary’s famous invitation to “tune in, turn on and drop out” changed a generation. The key element was “turn on” and it was Owsley Stanley who provided the means to do just that. Stanley, who has died at age 76, produced millions of doses of “acid”, the psychedelic drug LSD, which fueled the 1967 Summer of Love in San Francisco’s Haight-Ashbury district, and spread around the world.

Jimi Hendrix’s Purple Haze was the consequence of Stanley’s Monterey Purple acid; his varieties included White Lightning and Blue Cheer and aficionados called the best acid simply “Owsley”. He supplied the Beatles at the time of their Magical Mystery Tour television film (1967), and provided the acid to One Flew Over the Cuckoo’s Nest novelist Ken Kesey and his “Merry Pranksters”, whose 1964 bus trip across America was chronicled by Tom Wolfe in The Electric Kool-Aid Acid Test (1968).

Stanley’s acid turned hippies on and he also tuned them in. The band on Kesey’s bus was the Grateful Dead, with whom Owsley began an instantly synergistic relationship. The Dead took to his acid with such enthusiasm that Jerry Garcia became “Captain Trips”, while Stanley funded their career and became their sound engineer, creating their unique live sound and, by recording each concert, providing the most complete archive of any band of the era. Along with Bob Thomas, he designed the band’s “Steal Your Face” lightning bolt and skull logo, originally so his masses of sound equipment could be identified easily.

Stanley was also the quintessential drop-out. Born Augustus Owsley Stanley III, his grandfather of the same name had been governor of Kentucky, a US senator and congressman. His father, a state’s attorney, was pushed by wartime experiences into alcoholism. After his parents separated, he lived first with his mother in Los Angeles, then returned to his father and was sent to military school.

Nicknamed “Bear” when he began sprouting body hair, he was expelled from school for getting his ninth-grade classmates drunk. He spent more than a year as a patient at St Elizabeth’s, the Washington psychiatric hospital that also housed Ezra Pound, and tried college, but eventually joined the air force. His electronics training there led to work on radio stations in Los Angeles, while studying ballet and working as a dancer.

In 1963 he enrolled at the University of California, Berkeley, where he began smoking marijuana and selling fellow students morning-glory seeds for a legal high. The next year, he encountered LSD. He spent three weeks studying the then-legal drug’s chemistry, and began producing it himself. Quitting college and working at a local radio station, he set up the “Bear Research Group” to make acid. By the time he met Kesey in September 1965, he had become the first private producer of LSD on a grand scale.

Along with Tim Scully he set up a massive lab in Port Richmond, at the northern end of San Francisco Bay; when LSD became illegal in California in 1966, Scully moved to a location opposite the Denver zoo. Stanley stayed ahead of the law by keeping his acid in a small trunk which he shipped between bus stations, but after a 1967 raid his defence was that the 350,000 acid tabs police confiscated were for his personal use. He fought the case for two years, but his bail was revoked when he and the Dead were busted in New Orleans in 1970, and he was sentenced to three years in prison.

Once released, he resumed working for the Dead. His mentoring of the band had floundered in 1966, because while sharing his house in Los Angeles’s Watts ghetto they also had to share his carnivorous life-style. Stanley believed that carbohydrates poisoned the body and vegetables interfered with nutrition. Arguing with his fierce but erratic intelligence was challenging: “There’s nothing wrong with Bear that a few billion less brain cells wouldn’t cure,” said Garcia.

On a practical level, Stanley’s perfectionism meant that sound systems took too long to set up and take down, and he feuded with the business-first approach of Lenny Hart, the band’s manager and father of drummer Mickey. But in 1973 he delved into his archive to release Bear’s Choice, a tribute to the recently deceased Dead co-founder, Ron “Pigpen” McKernan, and in 1974, at a concert in San Francisco’s Cow Palace, he inaugurated the 604-speaker Wall of Sound.

Owsley later organised sound for Jefferson Starship and Dead bassist Phil Lesh’s solo projects, and scraped a living selling marijuana and making jewelery, a trade he learned in prison. In 1985 he met his third wife, Sheilah, and they moved to the Australian outback, squatting on 120 acres of remote land outside Cairns, convinced there was an oncoming Ice Age which would be best survived there. He believed that global warming was part of a natural cycle, rather than man-made.

In 2005, Stanley contracted throat cancer, attributing his survival to starving the tumour of glucose through diet. He died and his wife was injured when his car ran off a road in Queensland, and crashed into a tree. He is survived by Sheilah; by two sons, Pete and Starfinder; by two daughters, Nina and Redbird; and is remembered in the Dead’s song Alice D Millionaire and Steely Dan’s Kid Charlemagne.

[Michael Carlson is a sportswriter (and former tight end at Wesleyan University). He also writes obituaries for the British daily, The Guardian, where this article first appeared.]

2 Responses to Paul Krassner : My Encounter with Owsley