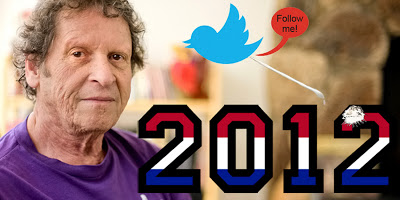 This is my first tweet. I have Writer’s Block. I mean Twitter’s Block. I’m waiting for a cure to be developed.

Perhaps Toyota should borrow a slogan from McDonalds: “You deserve a brake today.”

Texting while having sex? Two thumbs up.

Double standard: Charles Rangel pays restitution for unpaid taxes; Wesley Snipes is sentenced to a few years behind bars for a similar response.

Excuse me, I have to take a Wiki-leak.

Join me in signing a letter to stop the inhumane detention of Private Bradley Manning.

I saw the movie The King’s Speech and was disappointed that it didn’t end with Porky Pig saying, “Th-th-the-that’s all, folks!”

Steve Jobs’ legacy is a form of alchemy — he transformed planned obsolescence into a virtue.

Poor Rick Santorum, he’s afraid that if Roe vs. Wade isn’t overturned by the Supreme Court, there will an epidemic of recreational abortions.

I stopped channeling Lenny Bruce the day he reminded me, “C’mon, Paul, you know you don’t believe in that shit.”

Today marks the 15th anniversary of Allen Ginsberg’s death; he once told me he smokes not to get high, but rather because he likes to cough.

I went to the dentist today, and the hygienist gave me a choice of X-rays or a pat-down.

I covered the Dan White trial and coined “the Twinkie defense.”

The world desperately needs a campaign beginning with Kickstarter to raise funds to build an Iron Dome for the Palestinians.

Plan B has been aborted.

I voted for Barack Obama again, and yet now, although he wept for the loss of 20 kids, he never wept for the 178 kids killed by U.S. drones in Yemen and Pakistan.

Have a Merry War on Christmas and a Happy, Snappy and Fulfilling New Year.