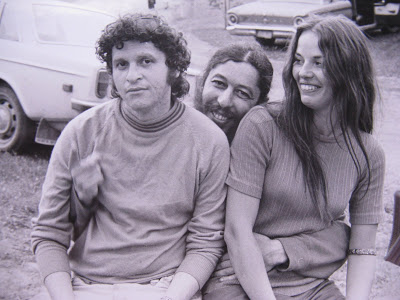 In the day: Paul Krassner, Tuli Kupferberg, and unidentified woman. Photo by Paskal / The Rag Blog.
And about those rumors…
Remembering Tuli

[Tuli Kupferberg, beat poet, singer, and a founder of the outrageous and iconic underground band, The Fugs, died Monday, July 12, in New York City. He was 86. Kupferberg was also a contributor to The Rag, Austin’s 60’s underground newspaper. Carl R. Hultberg wrote about Tuli on The Rag Blog yesterday, July 13. Paul Krassner was his friend and frequent co-conspirator.]

Tuli Kupferberg is better off dead.

Tuli was a dedicated truthseeker, and I’d like to honor that quality with a couple of truths.

There was a rumor that Philip Roth had lifted the onanistically obsessed idea for Portnoy’s Complaint from a song by the Fugs — a band on the cusp of rock and punk, named after Norman Mailer’s euphemism for fuck in The Naked and the Dead — but this notion was disavowed by Fugs leader Ed Sanders, who assured me, “Philip Roth did not plagiarize a Fugs song. He came to a Fugs show in 1966, and I think he was inspired by Tuli, in top hat and cane, singing ‘Jack-Off Blues.’ Many times in reunion concerts, introducing Tuli singing that song, I have suggested that Roth got some of the impetus for Portnoy’s Complaint from that time he was inspired by the Tuli tune.”

And then there was Allen Ginsberg’s famous poem, “Howl,” in which Tuli had been the inspiration for this passage: “…jumped off the Brooklyn Bridge this actually happened and walked away unknown and forgotten into the ghostly daze of Chinatown soup alley ways & firetrucks, not even one free beer…” Friends reacted: Rex Weiner claims, “It never actually happened that way, but Tuli happened, and that’s all that matters.” And Michael Simmons says, “It actually was partly true. Tuli did jump and survive, but it wasn’t the Brooklyn Bridge (Williamsburg, I think), but he was worried about wrongly influencing young people, so he’d refuse to talk about it later in life. I know because he told me.”

Thelma Blitz, Tuli’s devoted sidekick, corrects the myth in “Howl” that “Tuli just walked away after jumping off a bridge. In fact, he was taken to a hospital, severely injured, and wanted the world to know this so that no one would take a similar chance.”

And we can all be grateful he survived for all these years.

Finally, from his daughter Samara:

We have arranged to hold a service for Tuli at St. Marks church in New York from 12-3 on Saturday, with a reception following shortly thereafter. We will have a viewing in a separate room at the beginning of the service for anyone who wishes to see him. We are still working on the details for the reception and will let you know shortly. There will be no religious element to the service, and Ed Sanders will be one of the main speakers, after which anyone who wants to can talk, sing, recite poetry, or whatever they like. Tuli will be buried at Greenwood cemetery in Brooklyn on Monday morning at 9 a.m. You are welcome to tell anyone who asks, the funeral is open to whoever wishes to attend.