Perhaps There Is a Little Justice in This World 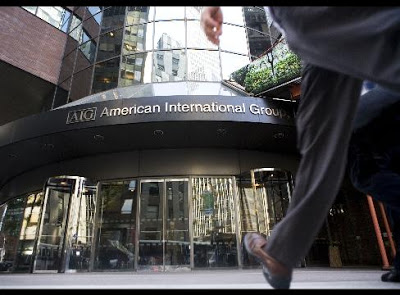 The market storm that brought down Lehman Brothers Holdings Inc., American International Group Inc. and other pillars of U.S. finance may have also blown holes in the portfolios of House Speaker Nancy Pelosi, Senator John Kerry and more than 50 other members of Congress.

Pelosi, in her most recent financial disclosure form, reported that her husband owned between $250,000 and $500,000 of stock in AIG, which ceded majority control to the U.S. government this week in exchange for $85 billion of loans.

Kerry, the 2004 Democratic presidential nominee, disclosed that his wife, Teresa Heinz Kerry, had more than $2 million of AIG stock at the end of 2007, when shares were worth $58.30. AIG has fallen 85 percent this week to close yesterday at $2.69. The lawmakers’ aides didn’t respond to calls seeking comment.

Altogether, 56 senators and representatives had stakes in AIG, Lehman, Fannie Mae, Freddie Mac, Bear Stearns Cos. or IndyMac Bancorp Inc. — some of the biggest casualties of the market bloodbath — according to the Center for Responsive Politics. The most recent annual disclosure filings list investments as of Dec. 31, 2007, and reveal the size of holdings only within a range of values. Lawmakers may have sold shares since then.

“Lawmakers, like everyone else in America who has any kind of retirement portfolio or stock holdings, are going to be suffering,” said Gary Kalman, a lobbyist for the Boston-based U.S. Public Interest Research Group, a consumer-advocacy organization. “This is a serious issue. We need to have a serious response.”

The Standard & Poor’s 500 Index plunged 7.6 percent during the first three days of this week on news that Lehman and Merrill Lynch & Co. — which survived two world wars and the Great Depression — were finished as independent investment banks.

Lehman filed history’s biggest bankruptcy case on Sept. 15 and Merrill sold itself to Bank of America Corp. Even after rallying yesterday, the S&P 500 is down almost 25 percent from its October 2007 peak.

Lehman shares, which traded for as much as $67.73 last November, closed yesterday at 5 cents. Merrill’s shareholders are in better shape. To avoid Lehman’s fate, Merrill agreed to be acquired in a stock-swap worth $26.28 per share at yesterday’s closing prices. In better days, Merrill soared to as much as $98.68 in January 2007.

Earlier this month, the government took control of Fannie Mae and Freddie Mac, which together accounted for almost half of the U.S. home-loan market. Fannie Mae shares had already plummeted more than 80 percent this year, to $7.04 from $39.98, before the government’s Sept. 7 takeover was announced. Shares dropped to 73 cents when trading resumed the next day. Freddie Mac fell to 88 cents, after starting the year at $34.07.

Representative Robin Hayes, a South Carolina Republican, had Congress’s biggest AIG stake, according to the Washington-based Center for Responsive Politics. Hayes’s AIG stock was worth between $2.8 million and $11.5 million.

John McCain, the Republican presidential nominee, avoided potential losses. Because of the Arizona senator’s run for the White House, his wife, Cindy, last year liquidated a blind trust that had contained stock in AIG, Fannie Mae, Freddie Mac and Lehman. The amounts of stock she had owned weren’t disclosed.

Representative Jane Harman, a California Democrat, owned between $50,000 and $100,000 of Lehman shares, according to her disclosure form. Calls to offices of Hayes and Harman weren’t returned.

Pasadena, California-based IndyMac’s bank was seized by U.S. regulators in July, in the third-biggest U.S. bank failure. IndyMac stock closed yesterday at 6 cents, after trading earlier this year for as much as $11.32.

This entry was posted in RagBlog and tagged Bank Bailouts, Bankruptcy, Congress. Bookmark the permalink.