Pete Seeger and our Progressive Culture 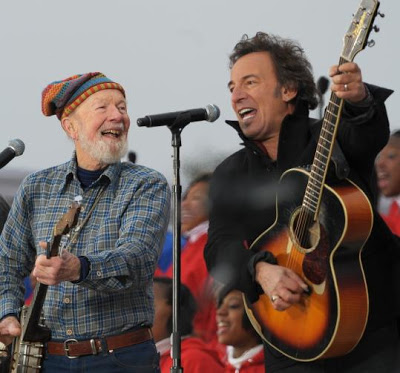 Pete Seeger and Bruce Springsteen sing “This Land is Your Land” at the Barack Obama inaugural celebration at the Lincoln Memorial in Washington, D.C., Jan.18, 2009. Photo by Mandel Ngan / AFP / Getty Images.

Social movements are defined in several ways; their leadership, their membership, their vision, their strategies, their resources, and their successes and failures. We often forget, however, that each of these elements are woven together by a culture. This culture can be poetic, dramatic, pictorial, or musical, or some of each. The culture provides a way for people in all different places, engaged in all different parts of the mass movement, to experience a common sense of themselves and what they share with others. It may be the case that a movement without a culture is a movement without a sense of vision, of shared purpose, of passion.

It is these thoughts that come to mind this week as we gear up to celebrate the 90th birthday of Pete Seeger, a man who has brought song to our hearts and minds for 70 years. Pete and those musicians who were inspired by him helped influence many of us to join the great twentieth century movements for social change: labor, civil rights, feminist, ecology. It was through his practice, getting sometimes thousands of fans to sing together in unison about building a better world, that people learned that working together is how change occurs.

And when progressives look back at the twentieth century and see a very mixed record of successes and failures, glorious victories and tragic defeats, it is the culture that reminds people of the nobility of the goals that social movements pursued and what still needs to be achieved. And no greater symbol of redemption of twentieth century progressive movements and cultures was evidenced than Pete’s leading 500,000 people in front of the Lincoln Memorial two days before the inauguration of President Barack Obama in singing Woody Guthrie’s “This Land is Your Land.” Pete included the verses that delegitimized private property and celebrated the continued struggle for fundamental social change.

That performance reminded older people of the fundamental justice of the old movements and the need to create new movements with new cultures in the 21st century. Vital to that brief sing out also was the message that the old political culture should not be forgotten even as new politics and culture is created. The old and the new are like links in a chain.

Let’s all celebrate the life and work of Pete Seeger as he turns 90 and celebrate ourselves as well.

Continued study and research into the origins of the folk music of various peoples in many parts of the world revealed that there is a world body — a universal body — of folk music based upon a universal pentatonic [five tone] scale. Interested as I am in the universality of [hu]mankind-in the fundamental relationship of all peoples to one another-this idea of a universal body of music intrigued me, and I pursued it along many fascinating paths.

Imagine a big see-saw, with a basketful of rocks sitting on one end. That end is down on the ground. At the other end, up in the air, is a basket half full of sand. Some of us are trying to fill it, using teaspoons. Most folks laugh at us: “Don’t you know the sand is leaking out even as you put it in?” We say that’s true, but we’re getting more people with more teaspoons all the time. One of these days that basket of sand will be full and you’ll see this whole see-saw just tip the opposite way. People will say, “Gee how did it happen so suddenly?” Us, and our goddam teaspoons.

1 Response to Pete Seeger and our Progressive Culture