Peter Dreier : How the Big Bucks Won in Wisconsin 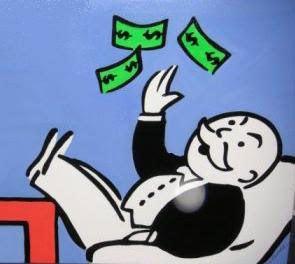 The real winner in Wisconsin on Tuesday was not Gov. Scott Walker, but Big Money. And the real loser was not Milwaukee Mayor Tom Barrett, but democracy.

But the real winner in Wisconsin on Tuesday was not Gov. Scott Walker, but Big Money. And the real loser was not Milwaukee Mayor Tom Barrett, but democracy.

Walker’s Republican campaign outspent Barrett’s Democratic campaign by $30.5 million to $4 million — that’s a 7.5 to 1 advantage. Another way of saying this is that of the $34.5 million spent on their campaigns, Walker spend 88% of the money.

Here’s another way of saying that: Walker spent $23 for each vote he received, while Barrett spent only $3.47 per vote.

But the reality is even worse than this, because the $34.5 billion figure does not include so-called independent expenditures and issue ads paid for primarily by out-of-state billionaires (like the Koch brothers, Sheldon Adelson, and Joe Rickets), business groups, and the National Rifle Association, which were skewed even more heavily toward Walker.

Once all this additional spending is calculated, we’ll see that total spending in this race could be more than double the $34.5 billion number, that Walker and his business allies outspent Barrett by an even wider margin, and that he had to spend even more than $23 for each vote.

In other words, business and billionaires bought this election for Walker. The money paid for non-stop TV and radio ads as well as mailers. There’s no doubt that if the Barrett campaign had even one-third of the war-chest that Walker had, it would have been able to mount an even more formidable grassroots get-out-the-vote campaign and put more money into the TV and radio air war.

Under those circumstances, it is likely that Barrett would have prevailed.

Pundits can have a field day pontificating about the Wisconsin election, but in the end its about how Big Money hijacked democracy in the Badger State on Tuesday, and how they’re trying to do it again in November.

[Peter Dreier is E.P. Clapp Distinguished Professor of Politics and director of the Urban Environmental Policy program at Occidental College. He is the co-author of Place Matters: Metropolitics for the 21st Century and The Next Los Angeles: The Struggle for a Livable City.” He writes regularly for the Los Angeles Times, The Nation, and American Prospect. His next book, The 100 Greatest Americans of the 20th Century: A Social Justice Hall of Fame, will be published by Nation Books in the spring. This article was first published at and distributed by Reader Supported News.]

2 Responses to Peter Dreier : How the Big Bucks Won in Wisconsin