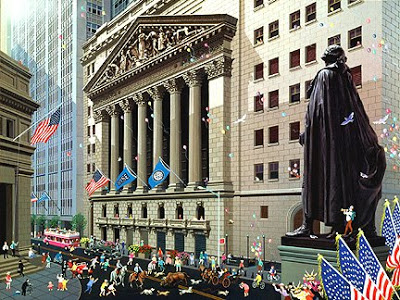 But it’s actually Wall Street where they’re whining. Or, shall we say, panicking?
By William Greider / July 14, 2008

Phil Gramm, the senator-banker who until recently advised John McCain’s campaign, did get it right about a “nation of whiners,” but he misidentified the faint-hearted. It’s not the people or even the politicians. It is Wall Street–the financial titans and big-money bankers, the most important investors and worldwide creditors who are scared witless by events. These folks are in full-flight panic and screaming for mercy from Washington, Their cries were answered by the massive federal bailout of Fannie Mae and Freddy Mac, the endangered mortgage companies.

When the monied interests whined, they made themselves heard by dumping the stocks of these two quasi-public private corporations, threatening to collapse the two financial firms like the investor “run” that wiped out Bear Stearns in March. The real distress of the banks and brokerages and major investors is that they cannot unload the rotten mortgage securities packaged by Fannie Mae and banks sold worldwide. Wall Street’s preferred solution: dump the bad paper on the rest of us, the unwitting American taxpayers.

The Bush crowd, always so reluctant to support federal aid for mere people, stepped up to the challenge and did as it was told. Treasury Secretary Paulson (ex-Goldman Sachs) and his sidekick, Federal Reserve Chairman Ben Bernanke, announced their bailout plan on Sunday to prevent another disastrous selloff on Monday when markets opened. Like the first-stage rescue of Wall Street’s largest investment firms in March, this bold stroke was said to benefit all of us. The whole kingdom of American high finance would tumble down if government failed to act or made the financial guys pay for their own reckless delusions. Instead, dump the losses on the people.

Democrats who imagine they may find some partisan advantage in these events are deeply mistaken. The Democratic party was co-author of the disaster we are experiencing and its leaders fell in line swiftly. House banking chair, Rep. Barney Frank, announced he could have the bailout bill on President Bush’s desk next week. No need to confuse citizens by dwelling on the details. Save Wall Street first. Maybe lowbrow citizens won’t notice it’s their money.

We are witnessing a momentous event–the great deflation of Wall Street–and it is far from over. The crash of IndyMac is just the beginning. More banks will fail, so will many more debtors. The crisis has the potential to transform American politics because, first it destroys a generation of ideological bromides about free markets, and, second, because it makes visible the ugly power realities of our deformed democracy. Democrats and Republicans are bipartisan in this crisis because they have colluded all along over thirty years in creating the unregulated financial system and mammoth mega-banks that produced the phony valuations and deceitful assurances. The federal government protects the most powerful interests from the consequences of their plundering. It prescribes “market justice” for everyone else.

Of course, the federal government has to step up to the crisis, but the crucial question is how government can respond in the broad public interest. Bernanke knows the history of the last great deflation in the 1930s–better known as the Great Depression–and so he is determined to intervene swiftly, as the Federal Reserve failed to do in that earlier crisis. By pumping generous loans and liquidity into the system, the Fed chairman hopes to calm the market fears and reverse the panic. So far, he has failed. I think he will continue to fail because he has not gone far enough.

If Washington wants real results, it has to abandon the wishful posture that is simply helping the private firms get over their fright. The government must instead act decisively to take charge in more convincing ways. That means acknowledging to the general public the depth of the national crisis and the need for more dramatic interventions.

Instead of propping up Fannie Mae or others, the threatened firm should be formally nationalized as a nonprofit federal agency performing valuable services for the housing market. That is the real consequence anyway if the taxpayers have to buy up $300 billion in stock.

The private shareholders “are walking dead men, muerto,” Institutional Risk Analytics, a private banking monitor, observed. Make them eat their losses, the sooner the better. The real national concern should be focused on the major creditors who lend to Fannie Mae and other US agencies as well as private financial firms. They include China, Japan and other foreign central banks. Foreign investors hold about 21 percent of the long-term debt paper issued by US government agencies–$376 billion in China, $229 billion in Japan.

It is not in our national interest to burn these nations with heavy losses. On the contrary, we need to sustain their good regard because they can help us recover by bailing out the US economy with more lending. If these foreign creditors turn away and stop their lending now, the US economy is toast and won’t soon recover.

Americans should forget about whining; it’s too late for that. People need to get angry–really, really angry–and take it out on both parties. What the country needs right now is a few more politicians in Washington with the guts to stand up and tell us the hard truth about out situation. It will be painful to hear. They will be denounced as “whiners.” But truth might be our only way out.