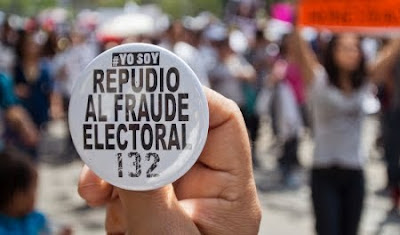 The court decision once again showed how divided Mexico is and how inured to election violations its population is.

Ricardo Monreal, the campaign coordinator for leftist candidate Andrés Manuel López Obrador (AMLO) summarized the position of the 40%: “Torrents of money, from unknown sources, which moved outside normal financial channels, formed the basis of the electoral fraud. We estimate the PRI candidate spent 4.6 billion pesos [$353 million] while the legal campaign limit is 336 million pesos.”

Rather than accepting what they considered to be election fraud, AMLO’s coalition of political parties, the Progressive Movement, filed a 624-page challenge to the election. While acknowledging that the apparent winner, Enrique Peña Nieto of the Revolutionary Institutional Party (PRI), received more votes than AMLO, the challengers declared that the elections should be annulled due to their having failed to meet the constitutional standard of fairness.

The principle challenge to fairness was spending in excess of the legal limit. The $353 million of estimated spending included the cost of an “imperial” fleet of private airplanes and helicopters, massive campaign publicity, and the distribution of millions of items including home appliances, T-shirts, farm animals, and prepaid gift cards.

The challengers also alleged that there was outright vote buying using cash, prepaid phone cards, and other items. Other charges leveled by the Progressive Movement included the use of pre-election polls, not to measure public opinion, but to create the image of an inevitable Peña Nieto victory.

Mexico’s special election court rendered an unappealable decision affirming Peña Nieto’s victory. It ruled that excessive spending had only been suggested but not proved — proof which would not be available until final campaign accounting was due in January.

Similarly it rejected the many items, such as prepaid phone cards, used to show vote buying by declaring that the challengers only showed that the cards existed, not that they were used to buy votes. The other challenges were also dismissed. Flawed polling, the court ruled, was simply an exercise of free speech, not a cause for invalidating the election.

The court decision once again showed how divided Mexico is and how inured to election violations its population is. A poll after the ruling showed that 55% of Mexicans thought the election court made the correct decision, while 71% felt that vote buying had occurred.

The now officially victorious PRI candidate welcomed the decision and set about arranging the political transition. The PAN, the party of incumbent president Felipe Calderón, also accepted the decision but did suggest an obvious change to electoral procedure — requiring parties to submit their records of campaign spending before the election court rules on the validity of an election.

Not surprisingly, the ruling dismayed the progressive intelligentsia. Criticism centered on the court’s failure to use its investigatory power to determine the quantity and origin of the massive campaign spending obvious to everyday Mexicans. This, critics allege, would have likely uncovered money coming from illegal sources (such as drug traffickers), money channeled through illegal channels (by law money must be channeled through political parties), and money being spent in excess of the 336-million-peso limit.

Response to the court ruling went beyond the written word. The day after the August 30 court ruling, #yosoy132, the student movement which sprang up to protest the “imposition” of Peña Nieto as president, staged a demonstration. Some 4,000 marched in a Mexico City “funeral procession” for democracy. A sign at the protest summed up the tenor of the march “Those on top say we should give up and accept Peña Nieto as president, those on the bottom say ‘surrender prohibited.’”

The following day another 2,500 turned out to protest as the new members of the Chamber of Deputies were sworn in. In other cities, such as Guadalajara, some 4,000 marched. A sign there read, “We block streets, we unblock minds.” 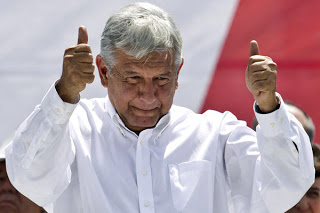 Andres Manuel Lopez Obrador, former presidential candidate of the Democratic Revolution Party (PRD), gives a thumbs up to his supporters at Mexico City’s Zocalo Plaza, Sept. 9, 2012. Photo by Christian Palma / AP.
Although members of the PRD, the main party of the coalition nominating AMLO, did not welcome the court ruling, the party not only failed to endorse protest demonstrations, but declared it would work within the system. PRD president Jesús Zambrano stated that since it was their duty to serve their citizens, state governors belonging to the PRD would recognize Peña Nieto as president and work with him. Similarly Miguel Barbosa, the PRD Senate leader, declared that the PRD congressional delegation would engage in dialogue with Peña Nieto.

The PRD is pinning its hopes on creating a responsible image and thus building on the 15.9 million votes its candidate received in the 2012 presidential elections. This could position the party to challenge the PRI in the next presidential election in 2018. The best-known potential PRD candidate for 2018 is Marcelo Ebrard, current mayor of Mexico City. He is popular at the end of his six-year term and has already declared that when his term ends in December he will begin campaigning for the presidency.

Another potential PRD candidate for 2018, Miguel Mancera, elected on July 1 to succeed Ebrard. Mancera, who outpolled the PRI mayoral candidate by 44%, faces the immense challenge of enhancing his image while administering the huge city characterized by the late writer John Ross as El Monstruo. While Mancera has to struggle with administering the monster, Ebrard, who will have no official position after December, must keep himself in voters’ minds.

While the PRD vows to work within the system, its 2012 (and 2006) candidate Andres Manuel López Obrador took the opposite course. At a massive September 9 rally in Mexico City’s main plaza he declared, “I am not going to recognize Peña Nieto as president.” He also announced he was resigning from the PRD — a party he had been a member of for 23 years and which he had served as president of.

In the future his political vehicle will be Morena (Movement for National Regeneration) — the grassroots movement he built up to support his 2012 candidacy. He laid out plans to convert Morena into a recognized political party. Rather than retiring from politics, as he had previously announced he would do if he lost the election, he declared, “We will continue to struggle our whole lives until we reach our goal — the transformation of Mexico.”

The rally very much personalized AMLO’s leadership. Speakers warming up the crowd referred to him simply as “the Leader” — as if it were foreordained that he would lead Morena into the future. Similarly, during the rally the crowd repeatedly chanted, “Es un honor luchar con Obrador (It’s an honor to struggle with Obrador).”

The meaning of AMLO’s leaving the PRD is still unclear. It will blur the image of the left. The PRD will attempt to serve as a responsible legislative force worthy of the presidency, while AMLO and Morena have specifically rejected such a course, saying he and his followers would not be errand boys for the Peña Nieto administration.

Looking ahead to 2018, it is hard to see AMLO declining Morena’s presidential nomination. (It should be noted that George Grayson’s biography of AMLO is entitled The Mexican Messiah.) Similarly it seems unlikely that Ebrard would step aside in 2018 for AMLO (as he did in 2012). As columnist Sergio Sarmiento observed, as a result of AMLO’s leaving the PRD, “The left’s possibility of winning the presidency in 2018 was significantly reduced.”

[Austin-based writer Philip L. Russell has written six books on Latin America. His latest is The History of Mexico: From Pre-Conquest to Present (Routledge). Read more articles by Philip L. Russell on The Rag Blog.]