Philip L. Russell : The PRI and the Mexican Spring 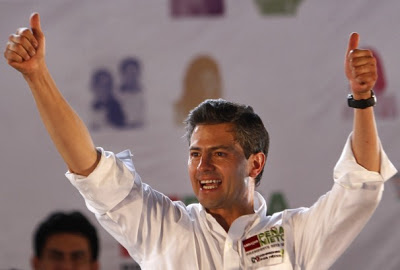 Frontrunner Enrique Peña Nieto of Mexico’s PRI on the campaign trail. Image from The Washington Post.
The Return of the PRI
and the Mexican Spring

The big surprise of the first debate was how well Peña Nieto was able to respond to attacks, thus destroying a widespread notion that he couldn’t speak coherently without a teleprompter.

In Mexico’s 2000 and 2006 presidential elections, the early frontrunner fell by the wayside as illegal funding and effective campaigning propelled challengers into the presidency. Unless the pollsters are very, very wrong, this year Enrique Peña Nieto, the early frontrunner, will coast to an easy victory.

Peña Nieto, the candidate of the Revolutionary Institutional Party (PRI) which ruled Mexico from 1929 to 2000, is a made-for-TV candidate — handsome and married to a beautiful soap opera star. Comparisons have already been made with JFK and Jackie. Appearances can’t be overestimated in a nation where the vast majority of voters rely on television for their news. Powerful business and media interests strive to keep Peña Nieto’s image favorable and before voters.

He draws the support of those dissatisfied with 12 years of slow economic growth and failed security policy under the incumbent National Action Party (PAN) party. Since they have no memory of PRI authoritarianism and the 20th century’s repeated economic crises, young people are the strongest supporters of Peña Nieto.

The formidable PRI political machine is solidly behind Peña Nieto. This machine, built up during the party’s 71 years in power, currently draws support from 20 PRI state governors who funnel human and financial recourses to the campaign. A Peña Nieto rally in Campeche illustrated the machine’s ability to mobilize people. There the pro-PRI oil workers union packed members into 21 busses sent to the rally, thus maintaining the image of broad support for their candidate. More than 1,600 buses brought supporters to the PRI candidate’s closing rally in Mexico City.

Josefina Vázquez Mota won a primary election to become the candidate of the incumbent PAN, which ousted the PRI from the presidency in 2000. Vázquez Mota chose a single word as her campaign slogan, “different.” Except for her being the first female major-party nominee for president, her campaign has never successfully explained just how she is different.

Unlike the solid support the PRI has generated for Peña Nieto, the PAN is rife with splits which undermine her candidacy. Vicente Fox, the first PAN president, endorsed Peña Nieto. Manuel Clouthier, son of a charismatic PAN presidential nominee with the same name, left the party declaring it had been “totally corrupted by power.”

Not only has her campaign lacked dramatic new proposals, but Vázquez Mota is saddled with the slow growth and the out-of-control drug war which have plagued the presidency of term-limited PAN incumbent Felipe Calderón (2006-2012). Poet and human rights activist Javier Sicilia told her, “For many you represent the continuation of policies which have plunged us into horror, misery, and plunder.”

In 2006, the supreme electoral court declared that Andrés Manuel López Obrador (AMLO) had lost the presidential election by less than a percentage point. His refusal to accept the loss and the massive protests he organized enhanced his confrontational reputation.

This year AMLO, once again candidate of the center-left Revolutionary Democratic Party (PRD), has spent the campaign season trying to shed his confrontational reputation. He no longer refers to the business community as a “mafia” and stresses that he is the only candidate who will introduce “true change.” He seeks to replace the current neoliberal economic model, which he has labeled “broken.”

AMLO has promised to make public investment the motor of growth. This would include five new oil refineries and a high-speed rail network. He claims that without increasing the deficit or raising taxes, he can finance such spending by ending corruption, effective collection of existing taxes, and imposing government austerity (including lowering exorbitant salaries of top officials).

As a final boost to the economy, AMLO proposes reducing the prices of gasoline and electricity, both of which are supplied by government monopolies. Critics note that such a policy would subsidize wealthy auto owners and increase both the government deficit and the production of greenhouse gases. 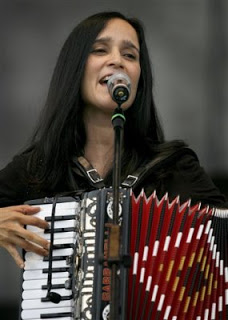 Mexican musician Julieta Venegas performs in support of the student movement #YoSoy132, or “I am 132” in Mexico City, Saturday, June 16, 2012. Photo by Marco Ugarte / AP.
The campaign, which officially began on March 30, has been a blur of rallies and meetings with various consistencies, the main purpose of which is to get print, TV, and increasingly, social media to spread the day’s message throughout the country. A mind-numbing avalanche of 30-second TV and radio spots touting the candidates forms the background to these daily events. The federal government provides parties with free airtime for the spots. Few viewers however feel these spots improve the quality of Mexican democracy.

The steady stream of campaign events was twice punctuated by government-organized TV debates. The big surprise of the first debate was how well Peña Nieto was able to respond to attacks by both Vázquez Mota and AMLO, thus destroying a widespread notion that he couldn’t speak coherently without a teleprompter.

In the first debate Vázquez Mota attacked Peña Nieto’s record as governor of the state of Mexico. In the second debate AMLO laid out his development plans, which others declared financially unworkable. Neither debate introduced anything startlingly new or markedly shifted polling numbers.

As the graph below indicates, Peña Nieto has retained his commanding lead, and AMLO has slowly risen as negative perceptions of him have faded. Finally, Vázquez Mota’s lackluster campaign slipped her into third place. 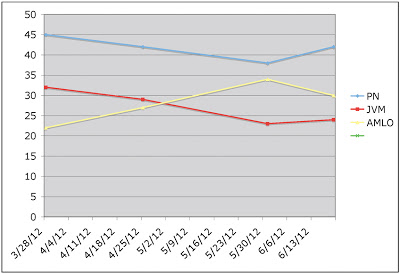 Graph from Reforma, June 22, 2012, p. 4.
During the campaign there was substantial discussion of the economy, which all the candidates agreed was not growing fast enough. Peña Nieto and Vázquez Mota advocated bringing private capital into Pemex, the national oil company. AMLO opposed that, declaring it to be “privatization.”

All three advocated increased funding for rural development, thus lowering poverty and increasing agricultural production. Peña Nieto called for fiscal, energy and labor reform. AMLO in effect called for rolling economic policy back half a century by once again using the state as an engine of economic development.

Another major issue, public security, has produced virtually identical responses. Rather than claiming that the current strategy, which has produced 60,000 deaths under Calderón, was a failure, the candidates vowed to continue waging the drug war. AMLO represented the consensus in promising a “federal police force, trained and honest, which will guarantee security and which will slowly replace military forces in the streets.”

The campaigning has been notable for what it has not considered. None of the candidates has proposed anything as radical as the new tax on the rich proposed by victorious French presidential candidate François Hollande. Nor was their substantial debate on global climate change even as shorelines move inland along the Gulf Coast and northern Mexico withers as the result of a devastating drought.

The one major surprise of the campaign came, not from the candidates, but from the students at Mexico City’s elite private Universidad Iberoamericana. On May 11, Peña Nieto appeared at a campus rally, assuming it would be the usual photo op with a chance for Q and A.

Much to his surprise, students had organized and vociferously confronted him on a variety of issues, such as how as governor he had directed police to break up protests in the town of Atenco. Police there not only abused residents, but sexually assaulted women they had arrested.

Rather than face down protesters, Peña Nieto retreated out the back door of the auditorium. He later declared the students had been manipulated by outside interests opposed to his candidacy.

In response 131 Iberoamericana students produced a video in which each held up a university ID and declared they had not been manipulated. This video was posted on line and soon went viral. Within days this posting gave birth to a national student movement known as #yosoy132 (I am 132), referring to additional students who joined the initial 131 protestors.

Members lambasted Peña Nieto’s candidacy and attacked the two dominant TV networks for dominating political discourse. Activists even organized their own candidate forum which both Vázquez Mota and AMLO attended. Peña Nieto declined to appear, declaring the forum would be stacked against him. The movement staged various protests, including one at the studios of the dominant Televisa network. Some of the signs carried by protesters declared:

Despite generating widespread publicity, #yosoy132 did little to change poling numbers. Those involved in the movement were urban students with internet connections. By the movement’s own estimate, only 112,000, or 0.1% of the population, viewed the #yosoy132-organized debate. Also, the movement failed to explicitly endorse either Vázquez Mota or AMLO.

As the July 1 one-round, winner-take-all election approaches, the question has become, not will Peña Nieto win, but who will be in second place. Late in June Vázquez Mota gained some ground emphasizing that, thanks to sound economic policy, the last 12 years of PAN administration have avoided the economic crises of the past. The roughly even split between Vázquez Mota and AMLO works to Peña Nieto’s advantage, since it prevents either of his challengers from rallying the “anybody-but-Peña Nieto” vote.

[Austin-based writer Philip L. Russell has written six books on Latin America. His latest is The History of Mexico: From Pre-Conquest to Present (Routledge). Frequently updated information on the Mexican presidential campaign can be found in chapter 30 of www.mexicofrompreconquesttopresent.com.]

4 Responses to Philip L. Russell : The PRI and the Mexican Spring