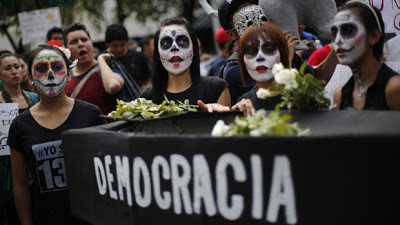 Protesters from Yosoy132 hold a mock funeral for “domocracia” during march in Mexico City, Saturday, July 14. Photo by Bernardo Montoya / Reuters.
An observers’ manual:
Who won the Mexican election?

Charges of vote-buying and exceeding campaign spending limits notwithstanding, there are positive signs for Mexico’s nascent democracy.

Anyone who hasn’t been deliberately ignoring the news knows by now that PRI candidate Enrique Peña Nieto “won” the July 1 Mexican presidential election with 19.2 million votes compared to 15.8 million for the runner-up.

That however isn’t the case, since legally speaking there is a victor in Mexican elections only when a special electoral court issues an unappealable ruling that a candidate a) received more votes than any other and b) the complaints filed against the apparent winner are without merit. The court is legally required to issue its ruling by September 6.

On July 12 AMLO challenged Peña Nieto’s electoral victory, filing a 638-page document alleging that the election failed to meet the standards set by the Mexican constitution. Article 41 stipulates that elections be “free and fair (libres y auténticas).” López Obrador based his challenge on the following:

Charge #1: The Peña Nieto campaign spent far in excess of the established legal limit. Financial accounting for the sprawling, decentralized PRI campaign isn’t even due until after the electoral court issues its final unappealable ruling. The charge is very likely true, given the massive spending which was evident during the campaign.

The only PRI campaign for which accurate spending figures are available is the 1994 gubernatorial campaign in Tabasco. In that case, the PRI spent $72 million to get its candidate elected, more than 60 times the legal limit. The exact spending total is known, not due to close auditing, but because someone leaked detailed accounts of PRI expenses. Photos of the 1,600 buses parked at a soccer stadium for Peña Nieto’s closing rally have become a symbol of the PRI’s extralegal extravagance.

Charge #2: The PRI won by buying votes. This is clearly illegal and if shown to have swung the election, would be grounds for annullment. At a press conference, AMLO exhibited 3,500 pre-paid gift cards redeemable at a big box retail store in a slum on the east edge of Mexico City. He charged the cards had been supplied by PRI operatives in exchange for PRI votes.

In other areas AMLO charged that the PRI bought votes by passing out debit cards, food baskets, construction materials, and fertilizer. Vote buying is a firmly entrenched practice in Mexico. However, providing legal proof that sufficient votes were bought to swing the election is a daunting challenge.

Charge #3: Peña Nieto’s campaign received money through illegal channels. By law, all campaign spending must be channeled through recognized political parties. AMLO charged the Peña Nieto campaign used funds outside the party structure to make massive buys of pre-paid gift cards and debit cards which were distributed to sway votes. Other funds illegally used by the campaign came from PRI-controlled state governments and from abroad.

Charge #4: Polls indicating that Peña Nieto had an overwhelming lead over AMLO served to create the impression that a Peña Nieto victory was inevitable. While the polls were portrayed as impartial, they were paid for by the PRI to bolster Peña Nieto’s candidacy.

The Mexican electoral court has two possible courses of action. After examining complaints it can rule that regardless of what irregularities were proven, the election still met the “free and fair” standard. It can also rule, based on Article 41, that the election should be nullified.

The court is not legally empowered to disqualify an individual candidate, as Tour de France officials can when an individual rider is found to have used illegal drugs.

Peña Nieto will almost certainly be declared the winner. If the election were overturned it would be a much greater decision than Bush v. Gore. In the U.S. case, there were two candidates, each ready and willing to move into the White House. In the Mexican case, overturning the election would mean starting the whole complex election process over again.

Since this process cannot be completed before the end of incumbent President Calderón’s term on November 30, the incoming congress would have to select an interim president until the new election selected someone to serve as president until 2018.

Even though it appears AMLO won’t gain the presidency, he did surprisingly well. He shook off the negative image created by his massive 2006 post-electoral protests and received more votes in 2012 than he did in 2006. Also, he was the only major candidate who gained ground during the course of the campaign, at the expense of both Peña Nieto and Josefina Vázquez Mota, the candidate of the incumbent PAN.

The left in general also made important gains. The PRD candidate for Mexico City mayor, a position generally regarded as the second most important in the country, received a whopping 44% more votes than the PRI candidate. The left also emerged as the second largest force in the Chamber of Deputies.

Charges of vote-buying and exceeding campaign spending limits notwithstanding, there are positive signs for Mexico’s nascent democracy. For the third presidential election in a row, citizen-volunteers manned polling places and counted votes with minimal controversy. Voters frequently voted for one presidential candidate and for a congressional candidate from a different party. Finally the election gave birth to the #yosoy132 student movement.

[Austin-based writer Philip L. Russell has written six books on Latin America. His latest is The History of Mexico: From Pre-Conquest to Present (Routledge). ]

2 Responses to Philip L. Russell : Who Won the Mexican Election?