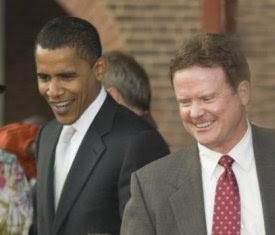 How about Obama-Webb?
Building the Best Winning Ticket:
Who’s the Progressive VP Choice?
By Tom Hayden / May 18, 2008

[Tom Hayden has written this piece to initiate a discussion among progressives about the Democratic ticket. The Progressives for Obama website is running a poll among the candidates below and invites our participation. The site also includes consistently interesting material. –.td]

Progressives should weigh in now on the vice-presidential choices facing Barack Obama. If all progressives are united for or against a particular candidate, we can be a factor in the mix ahead.

The choice needs to be someone who [a] wins a state or two that Obama might not win on his own, [b] wins over the Clinton voter constituency, and [c] can placate traditional party leaders.

But from a progressive perspective, the choice also should be someone with Obama’s instinct for organizing a majority progressive movement, not someone who revives the fading pro-business, pro-war DLC. The ticket should excite even more people around Obama’s vision of a reclaimed democracy from below, not someone who will dampen the enthusiasm. Here are my thoughts:

1) BILL RICHARDSON could help win New Mexico and Colorado, and increase overall Obama turnout among Latinos. Good credentials. Good on issues. Able to ensure that the Obama Administration pays attention to Latin America. Needs to be vetted further. Conventional wisdom is that a “two-fer” [black and brown] won’t work. Go for it unless the vetting turns up problems, otherwise give him a Cabinet post.

4) HILLARY CLINTON. While she has to be on the short list, and while weird bedfellows are not unusual, this is to be avoided if at all possible. The incompatibilities are too great, and the turnoff factor would be a problem. It is not clear that she would bring a state that Obama couldn’t capture on his own, assuming that many Hillary voters turn to McCain. She might prefer her independence in the Senate.

[Proposed Clinton surrogates include TED STRICKLAND, EVAN BAYH, and WESLEY CLARK, shadows of the DLC. WEBB might do as well as Strickland in Ohio. Bayh not likely to carry Indiana. Clark brings military credentials and has close relationship with Obama’s former advisor Samantha Power, but will he carry Arkansas or any other state?]

This entry was posted in RagBlog and tagged Democratic Party, Obama, Presidential Campaign, The Left. Bookmark the permalink.