Pirate Radio and the FCC : Blue Meanies in Austin 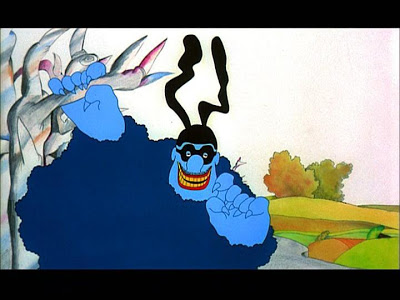 During the Q&A following his “Keeping it Legal, Avoiding FCC Fines,” presentation to about thirty Texas radio industry members, Mr. Stephen Lee, an FCC Resident Agent, based in Houston, was immediately asked a number of questions about “unlicensed radio operations,” AKA radio pirates.

“We actually chased a guy house to house here in Austin!” (I suspect the diminutive Mr. Lee would not be much of a challenge in a foot race…)

He was referring not to a literal foot chase, but repeated visits to followers of Austin’s infamous Alex Jones. Jones’ numerous inflammatory, conspiracy-inflaming programs are distributed on the commercially-supported Republic Broadcasting Network online and are broadcast on both licensed and increasingly, unlicensed, stations across the country.

According to those who routinely monitor the Austin airwaves, there are currently at least two such RBN stations operating somewhere in the city. Thus you now have the phenomenon of “commercial pirates,” touting gold futures, water filters, dried fruits, and of course, Jones’ numerous videos.

“Even after visiting one house,” said Lee, “we have to check tax records, etc. to check ownership before visiting another house.”

After a few more questions on the pirate issue, one of the undercover reconn team members, smartly dressed in a suit and tie, with a perfect copy of the conference registration badge draped around his neck, weighed in.

“I was in California recently and visited both Free Radio Santa Cruz which has been broadcasting for years without a license, overtly, publicly, they even run the local city council meetings! (Big laugh from audience. Lee squirmed.) And the Pirate Cat Radio/Cafe in SF which is operating with impunity from their own popular coffee shop. With the ready availability for anyone to purchase an FM transmitter over the internet (armstrongradio.com; freeradio.org) and the ability to deliver a signal via the internet to virtually anywhere, how is the Commission going to address this issue? I mean, it seems like there’s a real movement afoot to forgo all the regulatory hassles and just go straight on the air.”

Stammering a little, Lee responded, “Well, um, that’s a little above my pay grade. The Commission has to deal with the ‘problem de jour,’ and there has not been the same push for [busting] pirates as there has been, say, for cell phone jammers, which is a big issue. I really can’t advise you all policy-wise.” (methodshop.com; phonejammer.com.)

About that time, cell phone service in the room mysteriously went out…

[Jim Radio is a community media activist in Austin.]

5 Responses to Pirate Radio and the FCC : Blue Meanies in Austin