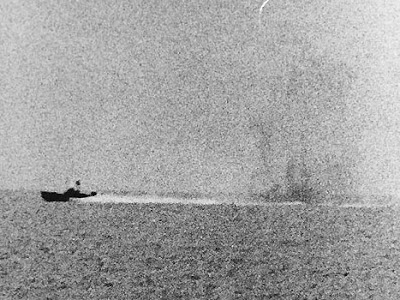 One of the Iranian gunboats from the incident

To Provoke War: Cheney Considered Proposal To Dress Up Navy Seals As Iranians And Shoot At Them

Speaking at the Campus Progress journalism conference earlier this month, Seymour Hersh — a Pulitzer-Prize winning journalist for The New Yorker — revealed that Bush administration officials held a meeting recently in the Vice President’s office to discuss ways to provoke a war with Iran.

In Hersh’s most recent article, he reports that this meeting occurred in the wake of the overblown incident in the Strait of Hormuz, when a U.S. carrier almost shot at a few small Iranian speedboats. The “meeting took place in the Vice-President’s office. ‘The subject was how to create a casus belli between Tehran and Washington,’” according to one of Hersh’s sources.

During the journalism conference event, I asked Hersh specifically about this meeting and if he could elaborate on what occurred. Hersh explained that, during the meeting in Cheney’s office, an idea was considered to dress up Navy Seals as Iranians, put them on fake Iranian speedboats, and shoot at them. This idea, intended to provoke an Iran war, was ultimately rejected:

HERSH: There was a dozen ideas proffered about how to trigger a war. The one that interested me the most was why don’t we build — we in our shipyard — build four or five boats that look like Iranian PT boats. Put Navy seals on them with a lot of arms. And next time one of our boats goes to the Straits of Hormuz, start a shoot-up.

Might cost some lives. And it was rejected because you can’t have Americans killing Americans. That’s the kind of — that’s the level of stuff we’re talking about. Provocation. But that was rejected.

Hersh argued that one of the things the Bush administration learned during the encounter in the Strait of Hormuz was that, “if you get the right incident, the American public will support” it.

“Look, is it high school? Yeah,” Hersh said. “Are we playing high school with you know 5,000 nuclear warheads in our arsenal? Yeah we are. We’re playing, you know, who’s the first guy to run off the highway with us and Iran.”