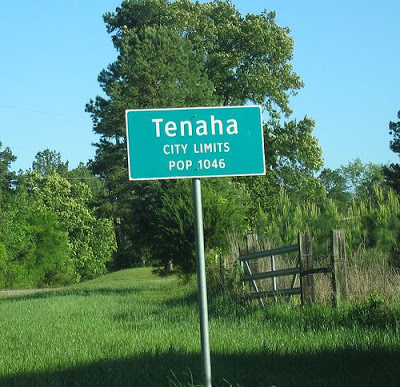 Beware all who enter here. Photo by MJW.
Highway robbery on the open roads of Texas

According to the Mayor of Tenaha, Texas, population 1,000, “It’s always helpful to have any kind of income to expand your police force.” Even, apparently, when it’s literally highway robbery. Police are enriching local coffers by abusing an overly vague law permitting the taking of property by those accused of committing a crime. In many instances people are pressured to sign a waiver giving up their property in exchange for not being charged.

Most of those caught in this kind of trap are black and from out of state. And, according to the Houston Chronicle, “some affidavits filed by officers relied on the presence of seemingly innocuous property as the only evidence that a crime had occurred.”

Laws permitting the seizure by police of property from drivers suspected of committing a crime, including their car and anything in it, have been abused for years.

The Chronicle and the San Antonio Express-Times have published an expose about this form of criminal misuse of power, Attorney David Guillory is suing officials in Tenaha and Shelby County on behalf of a client, and Texas state Sen. John Whitmire, who has pressed a number of admirable causes over the years, is pushing for action against this highly questionable practice that is frequently based on racial profiling and designed to enrich the coffers of municipal pirates like the police force of Tenaha, Texas.

Attorney David Guillory calls the roadside stops and seizures in Tenaha ‘highway piracy,’ undertaken by a couple of law enforcement officers whose agencies get to keep most of what is seized.

TENAHA — A two-decade-old state law that grants authorities the power to seize property used in a crime is wielded by some agencies against people who are never charged with, much less convicted, of a crime.

Law enforcement authorities in this East Texas town of 1,000 people seized property from at least 140 motorists between 2006 and 2008, and, to date, filed criminal charges against fewer than half, according to a San Antonio Express-News review of court documents.

Virtually anything of value was up for grabs: cash, cell phones, personal jewelry, a pair of sneakers, and often, the very car that was being driven through town. Some affidavits filed by officers relied on the presence of seemingly innocuous property as the only evidence that a crime had occurred.

Linda Dorman, a great-grandmother from Akron, Ohio, had $4,000 in cash taken from her by local authorities when she was stopped while driving through town after visiting Houston in April 2007. Court records make no mention that anything illegal was found in her van and show no criminal charges filed in the case. She is still waiting for the return of what she calls “her life savings.”

Dorman’s attorney, David Guillory, calls the roadside stops and seizures in Tenaha “highway piracy,” undertaken by a couple of law enforcement officers whose agencies get to keep most of what is seized.

Guillory is suing officials in Tenaha and Shelby County on behalf of Dorman and nine other clients who were stripped of their property. All were African-Americans driving either rentals or vehicles with out-of-state plates.

Guillory alleges in the lawsuit that while his clients were detained, they were presented with an ultimatum: waive your rights to your property in exchange for a promise to be released and not be criminally charged. Guillory said most did as Dorman did, signing the waiver to avoid jail.

It requires only a preponderance of evidence that the property was used in the commission of certain crimes, such as drug crimes, or bought with proceeds of those crimes. That’s a lesser burden than that required in a criminal case.

But Sen. John Whitmire, D-Houston, chair of the Senate Criminal Justice Committee, said the state’s asset forfeiture law is being abused by enough jurisdictions across the state that he wants to rewrite major sections of it this year.

“The idea that people lose their property but are never charged and never get it back, that’s theft as far as I’m concerned,” he said.

Supporters tout the state’s forfeiture law, when used right, as an essential law enforcement tool, allowing state and local departments the ability to go after criminals using the criminals’ money. Law enforcement agencies last year captured tens of millions of dollars from such seizures statewide, according to records from Whitmire’s office.

But in Tenaha, a town of chicken farms that hugs the Louisiana border, critics say being a black out-of-towner passing through with anything of value is almost evidence of a crime.

Tenaha Mayor George Bowers, 80, defended the seizures, saying they allowed a cash-poor city the means to add a second police car in a two-policeman town and help pay for a new police station. “It’s always helpful to have any kind of income to expand your police force,” Bowers said.

Local police, he said, must take aggressive action to stem the drug trade that flows through town via U.S. 59. “No doubt about it. (Highway 59) is a thoroughfare that a lot of no-good people travel on. They take the drugs and sell it and take the money and go right back into Mexico,” said Bowers, who has been Tenaha’s mayor for 54 years.

Bowers said he would defer questions about whether innocent people were being stripped of their property to Shelby County District Attorney Lynda Russell.

Harris County District Attorney Patricia Lykos said the state’s forfeiture law, which last year put millions in the coffers of local law enforcement agencies, including hers, takes some of the profit out of crime. “These ill-gotten gains are used to further the aims of law enforcement and public safety,” she said. “It’s kind of poetic justice, isn’t it?”

Lykos believes the law, if followed, provides citizens with adequate safeguards. Local police and attorneys in her office, she said, are well-versed in what constitutes adequate evidence for seizures. Rarely, she said, do seizures take place locally without the filing of criminal charges.

In Shelby County, the district attorney made legal agreements with some individuals that her office would not file criminal charges so long as the property owner waived all rights to the valuables.

“In exchange for (respondent) signing the agreed order of forfeiture, the Shelby County District Attorney’s Office agrees to reject charges of money laundering pending at this time,” read one waiver, dated April 10, 2007.

The property owners named in the waiver had just signed over $7,342 in cash, their 1994 Chevrolet Suburban, a cell phone, a BlackBerry and a stone necklace.

The law, forbids a peace officer at the time of seizure to “request, require or in any manner induce any person . . . to execute a document purporting to waive the person’s interest in or rights to the property.”