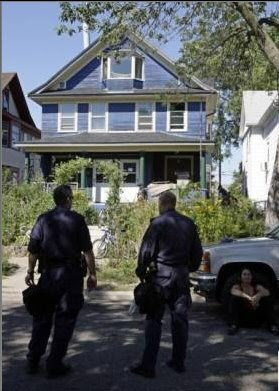 Protesters here in Minneapolis have been targeted by a series of highly intimidating, sweeping police raids across the city, involving teams of 25-30 officers in riot gear, with semi-automatic weapons drawn, entering homes of those suspected of planning protests, handcuffing and forcing them to lay on the floor, while law enforcement officers searched the homes, seizing computers, journals, and political pamphlets. Last night, members of the St. Paul police department and the Ramsey County sheriff’s department handcuffed, photographed and detained dozens of people meeting at a public venue to plan a demonstration, charging them with no crime other than “fire code violations,” and early this morning, the Sheriff’s department sent teams of officers into at least four Minneapolis area homes where suspected protesters were staying.

Jane Hamsher and I were at two of those homes this morning — one which had just been raided and one which was in the process of being raided. Each of the raided houses is known by neighbors as a “hippie house,” where 5-10 college-aged individuals live in a communal setting, and everyone we spoke with said that there had never been any problems of any kind in those houses, that they were filled with “peaceful kids” who are politically active but entirely unthreatening and friendly. Posted below is the video of the scene, including various interviews, which convey a very clear sense of what is actually going on here.

In the house that had just been raided, those inside described how a team of roughly 25 officers had barged into their homes with masks and black swat gear, holding large semi-automatic rifles, and ordered them to lie on the floor, where they were handcuffed and ordered not to move. The officers refused to state why they were there and, until the very end, refused to show whether they had a search warrant. They were forced to remain on the floor for 45 minutes while the officers took away the laptops, computers, individual journals, and political materials kept in the house. One of the individuals renting the house, an 18-year-old woman, was extremely shaken as she and others described how the officers were deliberately making intimidating statements such as “Do you have Terminator ready?” as they lay on the floor in handcuffs. The 10 or so individuals in the house all said that though they found the experience very jarring, they still intended to protest against the GOP Convention, and several said that being subjected to raids of that sort made them more emboldened than ever to do so.

Several of those who were arrested are being represented by Bruce Nestor, the President of the Minnesota chapter of the National Lawyers’ Guild. Nestor said that last night’s raid involved a meeting of a group calling itself the “RNC Welcoming Committee”, and that this morning’s raids appeared to target members of “Food Not Bombs,” which he described as an anti-war, anti-authoritarian protest group. There was not a single act of violence or illegality that has taken place, Nestor said. Instead, the raids were purely anticipatory in nature, and clearly designed to frighten people contemplating taking part in any unauthorized protests.

Nestor indicated that only 2 or 3 of the 50 individuals who were handcuffed this morning at the 2 houses were actually arrested and charged with a crime, and the crime they were charged with is “conspiracy to commit riot.” Nestor, who has practiced law in Minnesota for many years, said that he had never before heard of that statute being used for anything, and that its parameters are so self-evidently vague, designed to allow pre-emeptive arrests of those who are peacefully protesting, that it is almost certainly unconstitutional, though because it had never been invoked (until now), its constitutionality had not been tested.

There is clearly an intent on the part of law enforcement authorities here to engage in extreme and highly intimidating raids against those who are planning to protest the Convention. The DNC in Denver was the site of several quite ugly incidents where law enforcement acted on behalf of Democratic Party officials and the corporate elite that funded the Convention to keep the media and protesters from doing anything remotely off-script. But the massive and plainly excessive preemptive police raids in Minnesota are of a different order altogether. Targeting people with automatic-weapons-carrying SWAT teams and mass raids in their homes, who are suspected of nothing more than planning dissident political protests at a political convention and who have engaged in no illegal activity whatsoever, is about as redolent of the worst tactics of a police state as can be imagined.

UPDATE: Here is the first of the videos, from the house that had just been raided:

Jane Hamsher has more here, and The Minnesota Independent has a report on another one of the raided houses, here.

Read the rest of the horror story here. / Salon