Police State Amerikkka, Right in My Own Backyard

I was astounded to read that a Border Patrol roadblock was erected for several hours last week on SR 104 near the Hood Canal Bridge. Welcome to police state Amerikkka, I thought. And I tend to agree with the Port Townsend couple identified below who suggest this is “racial profiling.” In typical Olympic Peninsula fashion, arresting one white person mitigates such a charge. “Simplistic” is the best description of the reasoning that goes on out here.

I need to leave it, because I sure as hell don’t love it anymore. 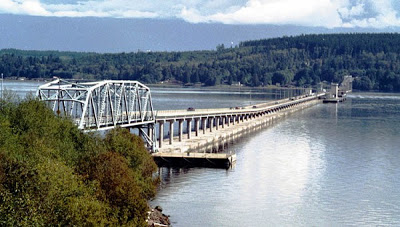 U.S. Border Patrol checkpoints, such as one near the Hood Canal Bridge on Friday and another about six months ago near Forks, are about to become more common on the North Olympic Peninsula, said an agent.

A checkpoint was set up Friday morning on state Highway 104 one mile west of the Hood Canal Bridge.

“These types of check points have proven to be successful in the past, and we are starting to utilize more checkpoints.

“We are expecting to begin using them frequently in and around that area, and in places in Jefferson and Clallam counties.”

He declined to say where or when the checkpoints would be.

In March 2007, agents detained seven people at a checkpoint near Forks.

They also are used in conjunction with local law enforcement to arrest felons, seize drugs and weapons and to deter illegal activity, he added.

At Friday’s checkpoint near the bridge, seven illegal immigrants and one person with a felony warrant were taken into custody, and $2,500 worth of illegally harvested salal was confiscated, Bermudez said.

“Border Patrol checkpoints are a critical tool to protect against illegal activity,” he said.

“We are going to continue to put them in areas where people have to pass through from point A to point B.”

If agents believed more investigation was required, they sent the vehicle to a secondary lane.

Otherwise, drivers were permitted to travel on.

“The supervisor today said traffic was flowing along pretty good through the checkpoint,” Bermudez said on Friday.

“I don’t believe that at any time did traffic come to standstill.”

Jewel and Harry Atwell of Port Townsend said they did have to wait in a line while they passed through the checkpoint on Friday morning.

“We were approaching the bridge when we had to stop in a line,” Jewel Atwell said.

“We assumed the bridge was open, but then we saw a big sign that said there were U.S. officers ahead.”

Atwell said the agents made them stop and asked them questions, while men on each side of their car looked in at their belongings.

Atwell said she felt the Border Patrol agents had violated their civil liberties and were racially profiling people.

“We asked them what they were doing, and the man said they were looking for someone,” she said.

“I told them that they were racially profiling us.”

Both the Atwells are Caucasian. Jewel Atwell said that by letting them go through so easily, the agents were practicing racial profiling.

“We arrested numerous people today, and one of the people was white,” he said.

“We have the authority to do these checkpoints in numerous places and we will.”

Bermudez said he understands the frustration of waiting in line, but that the job the Border Patrol is doing is important.

“It’s not just illegal immigration we are focusing on because we are reducing crime when we take a felon off the street,” Bermudez said.

“Our agents are highly skilled and highly trained.”

Bermudez also said he wasn’t surprised to hear some complaints.

“You won’t see a Border Patrol agent telling doctors or lawyers how to do their jobs,” he said.

“But you will see people trying to tell us how to do our job, even though we’re trained to do it.”

This entry was posted in RagBlog and tagged Homeland Security, Police Tactics, War on Terror. Bookmark the permalink.

6 Responses to Police State Amerikkka, Right in My Own Backyard