Politics Is What We Create by What We Do, What We Hope For, and What We Dare to Imagine 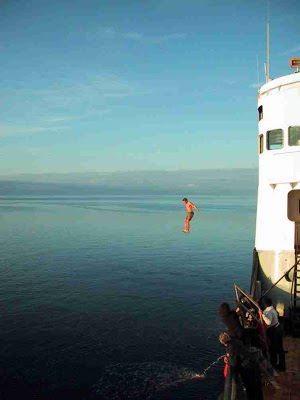 Thou, too, sail on, O Ship of State!
Sail on, O Union, strong and great!
Humanity with all its fears,
With all the hopes of future years,
Is hanging breathless on thy fate!
~~Henry Wadsworth Longfellow

The recent blowout election that gave us President Elect Barack Obama resulted in a flood of emotion that engulfed both parties. The one thing they had in common was that neither party could believe it. Political comedian Mort Sahl once said, “Liberals feel unworthy of their possessions. Conservatives feel they deserve everything they’ve stolen.”

If we have learned nothing else about Republicans, it’s that, with few exceptions, they are vindictive, immoral, blood-thirsty, and just plain power-mad. Republicans are so much better at destroying things than Democrats are. They say and do whatever it takes to win. And if that doesn’t work — they seize it anyway.

So we were braced for another disappointment — not because we didn’t share Obama’s vision of change and his hope for a better life for all Americans, but because voting machines were frantically flip-flopping votes from Obama to John McCain, minority voters were purged, telephones jangled with robocalls smearing Obama as an alien terrorist — and John King over at CNN kept ramming solid red “magic” maps in our faces as proof that McCain could not lose.

We woke up. After snoozing through massive homicide, refusing to confront genocide, ignoring fratracide and the hopelessness that has driven an alarming number of our military to commit suicide… we woke up. We stood united against a national addiction to chaos, bloodshed and corruption. We voted for a leader who promised to break that addiction, and to heal this nation in the name of the people.

By election night, we were giddy with relief. We clambered aboard that ship of state and rode the wave of long-lost hope — free at last. Obama’s win ripped a hole in the political air, and millions of us stood weeping as the blissful sound of Democracy wafted through every nook and cranny to swirl around this magnificent moment in our history.

But that was election night. Republicans, terrified of change, were in shock — in total disarray. But the next morning, they were out in force — maggots streaming from rotten turds whose blossoms had been stomped on.

The Heritage Foundation warned against the danger of the Left’s “radical agenda” of health care, education and energy. House majority leader John Boehner was either drunk or stupidly arrogant, or both, when he maintained that Obama may have won, but his “far-left agenda” was out of step with the majority of Americans. Boehner did concede, however, that House Republicans might work with Obama “when it is in the best interest of our nation,” and only when it promoted “superior Republican alternatives…”

Boehner’s predecessor, Dick Armey, was quick to point out that Obama didn’t win — Republicans lost. And they lost because they were just too damned compassionate. Armey is chairman of Freedom Works, which advocates scrapping the Federal Income Tax, kicking older folks out of Social Security to keep from overburdening the young, and of course freedom — such as that of network carriers to manage and control Internet content. According to Armey, Republicans have simply forgotten their principles.

Richard Haass, Council on Foreign Relations president, hissed, “The one thing I’m sure of is, events will test him. …There will be coups. …There will be genocide. … There will be terrorism.” Gee, Bush hasn’t completed his sprint to the finish line yet, and those like Haass are already waxing nostalgic for the Bush Doctrine.

Georgia Congressman Paul Broun called Obama a “Marxist” who was determined to set up a jack-booted Gestapo civilian security force to use against citizens — an ominious tactic taken right out of Hitler’s playbook. In the ensuing flap, Broun refused to apologize, or to acknowledge that the “civilian national security force” proposed by Obama is, in reality, a two-year-old pilot program — The Civilian Response Corps of the United States of America trained and equipped to “deploy rapidly to countries in crisis or emerging from conflict, in order to provide reconstruction and stabilization assistance.” The State Department has already deployed members to Sudan, Chad, Haiti, Lebanon, Kosovo, Iraq and Afghanistan.

Intolerance, hate — racism — runs deep within the heart of this country. It’s easy not to be racist, to support civil rights, equality — but when confronted by a change so abrupt, so momentous as the election of an African-American president, many white Americans have problems calming their inner beast. William Ferris, senior associate director of the Center for the Study of the American South at the University of North Carolina, said when discussing the hundreds of threats against Obama that the election of a black president is “the most profound change in the field of race this country has experienced since the Civil War. Racism is like cancer,” Ferris said, “It’s never totally wiped out, it’s in remission.”

Remission? Perhaps, except for those like the feral, all-knowing, all-caring, all-sensing, all-feeling, all-concerned — pretty much all-everything — “Maha Rushie” Limbaugh, who has been in shrieking racist meltdown since the day Obama announced his candidacy. Referring to Barack Hussein Obama early and often, Limbaugh stoked racist fear by warning millions of Dittodeadheads they were being taken over by a “half-minority.” In April 2007, Limbaugh aired an insulting Paul Shanklin parody, “Barack The Magic Negro,” and went from that to trying to whip up murderous riots at the Democratic National Convention.

Limbaugh, Sean Hannity, and their gang of slimy supremacist clones inflame the fires of fear and hate on a daily — hourly — basis. They know exactly what they’re doing. “The economic mess Bush has gotten us into is all Obama’s fault! The Obama recession is in full swing! We will soon be in the throes of an Obama depression! Obama’s going to raise our taxes! Obama’s coming after our 401k retirement checks! Millions more will lose their jobs! Quick — burn a cross — hang a noose in your tree before it’s too late!“

And Michael Savage warns that Blacks don’t want just a foot in the door; they are poised to take over the entire nation. On his Nov. 18 broadcast, Savage said, “I am telling you that there’s gonna be a wholesale firing of competent white men in the United States government up and down the line, in police departments, in fire departments. Everywhere in America, you’re going to see an exchange that you’ve never seen in history…”

If that’s not enough to send us screaming into the night, our knees hitting our chins, Lisa Miller, former front-page religious writer for the Wall Street Journal, now Newsweek‘s Society/Religion editor, asks, in a shameful, code-word laden piece — “Is Obama the Antichrist?”

Miller quotes several right-wing evangelicals, and she says conservative Christians believe a great battle is imminent. “After years of tribulation — natural disasters, other cataclysms (such as the collapse of financial markets) — God’s armies will vanquish armies led by the Antichrist himself. He will be a sweet-talking world leader who gathers governments and economies under his command to further his own evil agenda.” Miller says, given Obama’s liberal positions on abortion and traditional marriage, it’s no wonder that “Obama triggers such fear in the hearts of America’s millennialist Christians.” And, if we want proof — one of the winning lottery numbers in Obama’s home state of Illinois was 666 — which Miller says everyone knows is the sign of the Beast, or the Antichrist.

The fascist lies and smears of Republicans and their doppleganger radio creeps should come as no surprise to those paying attention. However, the ripples of uneasiness and fear surging through Democratic ranks as a result of these assaults is a bit puzzling. Perhaps it’s because after eight years of covering — and uncovering — deceit, lies, and monstrous war crimes perpetrated by George Bush, they are hesitant to trust another president regardless of his party affiliation. Or, perhaps they’re afraid to have hope because they believe George Orwell’s flat, no-wiggle-room assertion that — “All issues are political issues, and politics itself is a mass of lies, evasions, folly, hatred, and schizophrenia.“

Whatever the reason, each day brings a new rash of criticism about Obama’s choices for his transition team, his economic team, his foreign policy team. His selection of Rahm Emanuel as chief of staff, probable selection of Hillary Clinton as Secretary of State, and his decision to keep Robert Gates as Defense Secretary for at least a year resulted in cries of betrayal throughout the left-wing blogosphere.

For two Democrats to agree on any one thing would indeed be change. Everybody has his/her own views as to who should make up the cabinet. And, since I’m the most liberal Democrat I know, it seems obvious that Obama should have put the environment into the hands of award-winning former vice president Al Gore, justice into the hands of Constitutional scholar Jonathan Turley, and Defense into the hands of former Supreme Allied Commander General Wesley Clark.

Those on the left who complain that Obama is “loading up his administration with Clintonites” should pause and take a deep breath. Anybody old enough to serve — who has the experience to serve — would necessarily come from either the Clinton or the Bush era. Which would you prefer? We should remember it is Obama’s policies, not theirs, that will be put into effect. He promised change — to be honest and up-front with all the people. He is keeping that promise.

Last week, in three days Obama held three press conferences wherein he outlined policies that reach far beyond the immediate crisis, such as his long-range plan to boost the economy by creating 2.5 million jobs. “We’ll put people back to work rebuilding our crumbling roads and bridges, modernizing schools that are failing our children,” he said, “and building wind farms and solar panels; fuel-efficient cars and the alternative energy technologies that can free us from our dependence on foreign oil and keep our economy competitive in the years ahead.”

Millions of us who voted for Obama are weary of fighting our way through the tangles of an Orwellian world. We yearn to live in a Wellstonian world, one where “…politics is not about observations or predictions. Politics is what we create by what we do, what we hope for, and what we dare to imagine.“

Obama is not perfect. The problems Bush is only too happy to dump on him are almost insurmountable and getting worse by the day. Obama will make mistakes, but he has promised that, with our help, the hopes of all Americans can be realized. Together — we can change the direction of the country.

We will not jump ship. Come hate or high water — we can do it.

[Sheila Samples (sheilastuff.blogspot.com) is an Oklahoma writer and a former civilian US Army Public Information Officer. She is a regular contributor for a variety of Internet sites. Contact her at rsamples@wichitaonline.net.]

This entry was posted in RagBlog and tagged American Society, Barack Obama. Bookmark the permalink.