Pollyanna : Bad News for the Devil 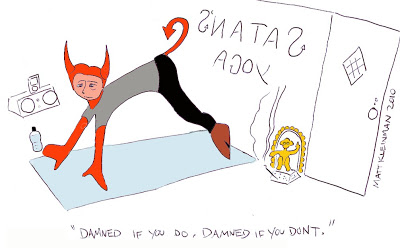 Cartoon by Matt Kleinman / The Rag Blog.
Bad news for the Devil:
Yoga is Hindu

The Hindu American Foundation has launched a campaign, “Take Back Yoga,” to educate Westerners about the religious origins of the popular practice. Yoga, a combination of mental and physical disciplines taught in gyms and health clubs everywhere, has strong scientific evidence supporting its health benefits, especially in combating stress and improving quality of life for those with chronic illness.

However, many Christians have worried that yoga is a tool of the Devil. In response to the campaign, however, R. Albert Mohler, Jr., president of the Southern Baptist Theological Seminary in Louisville, Kentucky, said he agrees that “yoga is Hindu,” and for that reason “imperils the souls of Christians who engage in it,” according to The New York Times.

This would seem to infringe on Lucifer’s franchise prerogatives. But don’t worry, Old Nick is a resourceful fellow, and we predict he’ll soon be offering Pilates at your local club!