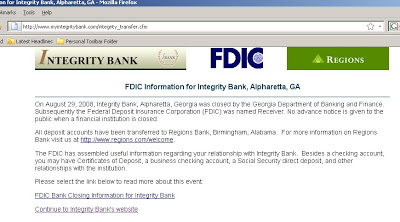 Integrity Bank of Alpharetta, Georgia, was closed by U.S. regulators today, the 10th bank to collapse this year amid a surge in soured real-estate loans stemming from the worst housing slump since the Great Depression.

Integrity Bank, with $1.1 billion in assets and $974 million in deposits, was shuttered by the Georgia Department of Banking and Finance and the Federal Deposit Insurance Corp. Regions Financial Corp., Alabama’s biggest bank, will assume all deposits from Integrity, which was run by Integrity Bancshares Inc. The failed bank’s five offices will open on Sept. 2 as branches of Regions, the FDIC said.

“Depositors will continue to be insured with Regions Bank so there is no need for customers to change their banking relationship to retain their deposit insurance,” the FDIC said.

Banks are being closed at the fastest pace in 14 years as financial companies report more than $505 billion in writedowns and credit losses since 2007. California lender IndyMac Bancorp Inc., which had $32 billion in assets, was closed July 11 in the third-largest bank seizure, contributing to a 14 percent drop in the U.S. deposit insurance fund that had $45.2 billion at the end of the in the second quarter.

Regions will buy about $34.4 million in assets and will pay the FDIC a premium of 1.01 percent to assume the failed bank’s deposits, the FDIC said. The FDIC estimates the cost of the Integrity failure to its deposit-insurance fund will be $250 million to $300 million.

Read all of the gory details here. / Bloomberg

This entry was posted in RagBlog and tagged Banking, Bankruptcy, Economic Collapse. Bookmark the permalink.