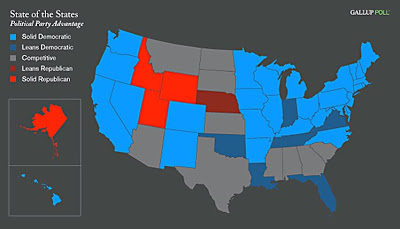 Three of the five red Republican states top the list of states with the highest number of people who subscribe to online pornography sites.

Political party advantage shifted strongly toward the Democratic party in a large-sample Gallup poll released at the end of January, 2009. Gallup pollsters tell us, “One would have to go back to 1983, when Democrats held a decisive 19-point advantage in party identification (43% to 24%), to find a significantly better showing for the Democratic Party in any Gallup polling.”

Those few bright red states are also at the center of another study making headlines in today’s newspapers. Three of the five red Republican states top the list of states with the highest number of people who subscribe to online pornography sites. The study, “Red Light States: Who Buys Online Entertainment?” is the work of Harvard professor, Benjamin Edelman, Ph.D, whose scientific study from 2006 to 2008 utilized information from a top 10 seller of adult entertainment.

I had to wonder what religion’s role may be in this commonality for lusty sexual voyeurism. Forbidden fruit versus God-given sexual drive? Could very conservative political views also be linked to these jarring findings? These outwardly very religious and Republican states have clearly repressed desires that even Rush Limbaugh can not satisfy. Is this an hypocrisy of horniness?

Pornography has deviled religion for a very long time. From Pompeii to Provo, the faithful who partake of varying versions of Debbie doing Dallas are condemned as sinners. The Southern Baptists never miss an opportunity to use even the very word pornography as an attack weapon.

Confirmation of Obama Department of Justice nominee David Ogden, whose previous representation of pornographers as an attorney, has pro-family religious groups up in arms. Richard Land, president of the Southern Baptist Ethics & Religious Liberty Commission, told “Baptist Press” regarding Ogden’s defense. “… A person’s views on pornography are a window to a person’s worldview.”

So, using Brother Land’s reasoning, professional defense attorneys defending serial murderer, Jeffery Dahmer, would have held positive views on chopping up street hustlers if we looked into their worldview window. Actually, Brother Land has other real world worries right outside his window.

It took a little research to get a handle on ‘private prayer language’ but it is Southern Baptist code-speak for glossolalia, the speaking in tongues when the holy spirit takes over some folks, like we have seen in the videos from Sarah Palin’s little church in Wasilla, Alaska.

Nonetheless, all the Marriott family hotel magnates are listed as “Famous Mormons in Business” by the church. Time Magazine declared in their cover story on Mormons, “The church’s material triumphs rival even its evangelical advances.