Postcards About Palin : What Some Alaskans Say About Sarah 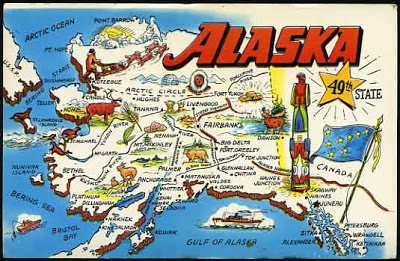 ‘Alaskans in general do not give a rat’s ass about anything outside of Alaska’
By Mariannn G. Wizard / The Rag Blog / September 3, 2008

While working in Alaska in 2004, I met people from all of AK’s many political parties as well as independent voters, from a fairly wide range of ages, lifestyles and economic levels. I’ve tried to keep in touch with quite a few of them, but one major fact that people in the “lower 48” should try to get their heads around when looking at Sarah Palin as a Vice Presidential nominee is that Alaskans in general do not give a rat’s ass about anything outside of Alaska.

AK is too big, with a still smallish and rather closely-knit population spread over a vast expanse, too distant geographically, and just too darn different to feel much in common with “outsiders”, which is what anyone not from Alaska is, and remains for some unspecified number of winters. (I only made it through one.) The geographic distance mandates more than the 13 hour travel time (at best) from the lower 48; it results in a 3 hour time difference. Network news shows and prime time programming take place in mid-afternoon in Alaska, and are generally ignored. News of non-Alaskan issues reaches AK late if at all, and seems so far away and so unimportant, while Alaskan concerns rarely surface in the “national” media.

There are still a few folks I met and worked with in 04 who I hear from every now and again. Several days ago I asked them what they can tell us about Gov. Palin. Here are excerpted replies from three men and three women, including 5 whites and one Native Alaskan, and two former candidates for political office in Alaska

“Apart from her outspoken pro-life conservative Christian thing, she’s pro-drilling, pro-wolf killing, pro-mining, but strangely estranged from the rest of the radical republicans in Alaska on the issue of oil company influence. regular people here LOVE her, state house and senate members fear her disdain. she’s really a hockey mom and a beauty queen. i think America’s non-D moms and Nascar types will love her. her husband’s a tough guy who wins 1500 mile snowmobile races, works on the slope, and used to be (maybe still is) a commercial fisherman – but is also a great dad. she’s a great mom.

She’s not a good speaker, but she’s very very photogenic and appears real, very poised, and never plastic on TV though she gets her facts messed up. you can see her flubbing some facts on the Charlie Rose show archive. I predict she’ll add 5 points to McCain’s vote percentage, making it very close in November.”

“In the recent upheaval over the firing of Public Safety Commissioner Walt Monegan and the push to have him fire Trooper Wooten, Palin has lied, flip-flopped and covered-up her actions and those of others until finally someone fell on the sword for her. So she has people around her stupid enough to do these things for her and then take the fall when the shit hits the fan. So maybe she is “ready” to be in national office because that is what America has been accepting for the last eight years.

But is that leadership? I think not

Is that leadership I want in Washington? Not just N0! But, HELL NO!!!!”

“She’s good for us but not with McCain.”

“Sarah Palin is a high school prom queen with a passive aggressive past, a serious ego, far better a person than [former AK Governor] Frank Murkowski is/was, and a better governor too.

But she’s embroiled in the current “Trooper-gate,’” wherein it appears that she used her position to apply pressure to have her sister’s ex-husband (a Trooper with a tainted career record) fired. She insists that she never advised anyone to pursue the ex-brother-in-law, but it looks kinda’ fishy…

She claims to have “smoked marijuana in Alaska when it was legal, but I didn’t like it…” apparently choosing to avoid the controversy over the fact that the Ravin Decision [ratifying AK’s constitutional privacy provisions even for marijuana] is still the law, as well as appearing somewhat dishonest…perhaps she’s afflicted by Bill Clintonitis… instead of claiming not to have inhaled, she’s in essence saying that she inhaled, but that the whole affair was miserable. During her campaign trail speeches for Governor, she admitted smoking pot, but stated that she hadn’t done so since becoming a mother… No references back then…to the now-reported miserableness of it …

She DID say back then that they had methamphetamine and other more serious issues to focus on in the Mat-Su Valley, than reefer growers and smokers …

As Mayor of Wasilla, she reportedly fired a police chief while he was away on vacation, apparently not having the integrity and confrontational skills to address him more directly upon his return … Similar antics in the current ‘Trooper-gate’ affair …

She managed to distance most of the old neo-con guard in Alaska, which is all right by me. … but given a choice to have a friendly meal with either her or [iconic former AK governor] Jay Hammond, I’d likely dine with Jay. Of course, reaching up Jay’s skirt wouldn’t be nearly as pleasing, I presume.. but one can’t have EVERYTHING, I guess…. And seriously, just as JFK’s attractiveness to many women voters played a role in his election, many persons find Sarah to be quite the eye candy as well…
.
She’s a pro-life, sometimes-libertarian-minded, aging rock’n’roller, prom queen with an ego the size of two or three of mine.. But I think that politics is like honey to flies in re. to attracting narcissists. Seriously.”

“Her world view is Wasilla and the Mat-Su Valley. She doesn’t work for Alaska as a whole as governor; she wouldn’t have a clue how to work for the whole nation…. Also she hasn’t been through the fire, politically; she’s never taken on an issue and gotten her ass kicked, so that would be new for her ….”

“I’m hopelessly in love with these two! Senator John McCain and Cindy McCain for choosing Governor Sarah Palin as his veep! These two are pea pods, mirror images of one another!

I’m solid McCain/Palin. Someone pinch me, I must be dreaming!` …Senator McCain and Governor Sarah Palin ROCK!”

I’m not entirely sure whether that last one is intended sarcastically or sincerely… but that’s those Alaskans for you!

1 Response to Postcards About Palin : What Some Alaskans Say About Sarah