Poverty: Governments Can Be Forced to Do Right 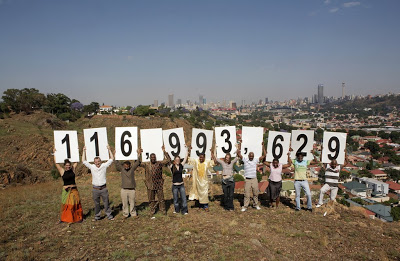 Guinness said Wednesday more than 116 million people took part in public gatherings and demonstrations organized by anti-poverty activists in 131 countries across the world, making it “the biggest mobilization ever on a single issue.”

Organizers said the mass action on Oct. 17-19, which drew nearly 2 percent of the world’s population, sent a clear message to world leaders that people will not stay seated while promises to end poverty remain unfulfilled.

“This is a wonderful statement of global determination and commitment to end the injustice of extreme poverty,” said Desmond Tutu, archbishop of Cape Town, adding: “116 million people have stood together to say [that]. This message must be heard by leaders.”

The worldwide actions, billed as “Stand Up and Take Action,” were jointly organized by two international groups, the Global Call to Action against Poverty (GCAP) and the UN Millennium Campaign.

“The largest Stand Up is truly an historical event and as keepers and adjudicators of world records we are delighted to ratify such an important record and make this official,” said Craig Glenday, editor-in-chief of Guinness World Records.

“Mass mobilization has the power to change the course of history, and we will not stop mobilizing and advocating for action until the MDGs are achieved for the poorest people in the world.” – Salil Shetty, Millennium Campaign

In a statement, Glenday congratulated “every individual” for taking part in the event and said he welcomed them to the “family of Guinness World Records.”

The UN Millennium Campaign was established by the former UN chief Kofi Annan in 2002, about two years after world leaders agreed to set the Millennium Development Goals (MDGs) — a series of measures to effectively reduce poverty, illiteracy, diseases, and environmental pollution by 2015.

Like his predecessor, the current UN Secretary General Ban Ki-moon is urging both the governments of rich and poor countries to do more to achieve all the MDGs and to end extreme poverty by half in the next 7 years in accordance with their pledge.

The Millennium Campaign says it is the responsibility of developing countries to work toward the Goals on reducing poverty and improving healthcare, education, and the environment, especially by “[ensuring] greater accountability to citizens and efficient use of resources.”

For their part, adds the Campaign, the world’s wealthier countries must “deliver on their end of the bargain with more and more effective aid, more sustainable debt relief, and fairer trade rules, well in advance of 2015.”

Guinness said people in Asia came in the largest numbers to participate in the “Stand Up and Take Action” campaign against poverty. Its verified record shows 73,151,847 people took part in the campaign in Asia, the largest continent on Earth. 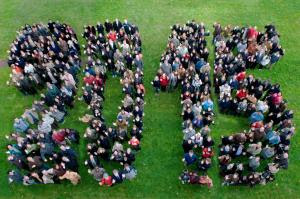 UN staff in Bonn stand up against poverty. © MT_bulli (flickr)
The Guinness records show that in the Philippines, more than 35 million people participated, which is equivalent to one third of the country’s population. The group mentions Afghanistan, Bangladesh, Egypt, India, Indonesia, Malawi, Nepal, Nigeria, Pakistan, Rwanda, Thailand, and Uganda as countries where people raised their concerns about poverty in massive numbers.

In the industrialized world, major events took place in Italy and Germany where hundreds of thousands of people demanded more and better aid to developing countries and the implementation of fair international trade rules.

“This is a new kind of action the world is seeing,” said GCAP’s Sylvia Borren. “It’s the local influencing the global. Women in villages in Africa are connecting and joining millions of citizens and other countries. The young people are taking ownership of the MDGs like never before.”

Inspired by the unprecedented turnout at the anti-poverty events, Martin Luther King III said it’s now up to the leaders of the world to match the passion and commitment of their people and deliver on their commitments. “My father,” he added in a statement, “proved that when the voices of citizens become too loud to ignore, governments are forced to do the right thing.”

The son of America’s great civil rights leader may be right.

According to the Millenium Campaign’s Salil Shetty, world leaders have already started to respond. “Mass mobilization has the power to change the course of history,” said Shetty, “and we will not stop mobilizing and advocating for action until the MDGs are achieved for the poorest people in the world.”

This entry was posted in RagBlog and tagged Direct Action, Political Activists, Poverty. Bookmark the permalink.

1 Response to Poverty: Governments Can Be Forced to Do Right