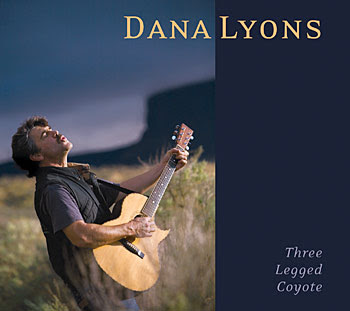 My brilliant singer-songwriter-activist long-time buddy has done it again.

Lyons is the singing satirist whose “Cows With Guns” has become the anthem of the vegan/vegetarian movement. [See “Cows With Guns” flash animation.] The very idea of uzi-packin’ bovines has become stock-in-trade for even those pacifists who would end at last the horrors of factory farming.

Dana has also rendered immortal a wide range of dam-busting, nuke-fighting, war-opposing activists. Their often lonely quest for peace, justice and the long-forgotten American way somehow finds a home in Lyons’ range, which roams from the soulful to the sinful with shocking ease.

As usual, Dana’s new Three Legged Coyote CD is a joy to behold. It’s full of haunting incantations to the west, hilarious dissections of the tortures of the male-female relationship, and searing political balladeering to the injustices endured in Latin America, New Orleans and among us all. 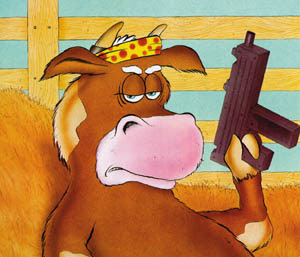 Dana Lyons’ cow with gun.
It opens with “Crazy Cowboy,” a mellow ode to life on the prairie which carries through “Big Rolling Country” and “Three Legged Coyote.”

But Dana can never stay too serious too long. The absolutely hilarious “How I Miss Your Dog” is the ultimate down-home put-down of a relationship gone wrong. No doubt countless thousands of future break-ups will be cemented with a rendition of this howl of a f—you farewell.

“Grandma’s Up in Heaven, Giving Hell to God” will also surface at innumerable funerals dedicated to those old ladies in tennis shoes who really run the world.

But when we get to “Patagonia Dam Song” we get to another level altogether. Dana puts himself in the soul of a Patagonian rebel whose life has spanned a horrific coup now being topped off by the “sale” of the nation’s water supply. We see these fights over water now more and more, between impoverished nations and mega-corporations that would claim the very air we breathe and water we drink. Time is on the people’s side, and this brilliant, searing song comes right from their heart.

In “Blameless,” Dana stops to take another crack at the ceaseless turmoil/torment of the dance of relationships. This one’s a love/hate admonition to try to make peace. Dana lets you know he’s serious… in a way… about the “can’t we all get along” thing. But he’s also savvy enough to know that, hey, if you can’t laugh about the perils of sex and love, nobody’s going to get much peace — or much of anything else.

This CD does save the most powerful for last. The concluding “Sweet New Orleans” is a devastating, heart-breaking ode to the horrible suffering imposed on our most musical city by a government too callous to care. Drowned pianos, abandoned saxophones and the voice of a culture abandoned by the rich and powerful makes for a combined dance and dirge almost too painful to bear. Dana wears the shroud lightly, though, mixing the suffering with bitter irony and the tunes of hope. It’s an unforgettable piece to remind us of the beauty lost and the power of redemption embodied in the world down there after Katrina.

In all, this CD, like so much Lyons has done, walks a hard line between serious politics, outrageous humor, compelling melody, and very good singing. Dana likes to tour and sing to citizen groups wherever possible. Hear this album and sign him up. You and your community will never be the same.

[Harvey is co-author (with Dana Lyons) of “Shoshanna’s Solartopian Tree Stomp,” which appears at www.solartopia.org. He is Senior Editor of www.freepress.org, where this review also appears.]