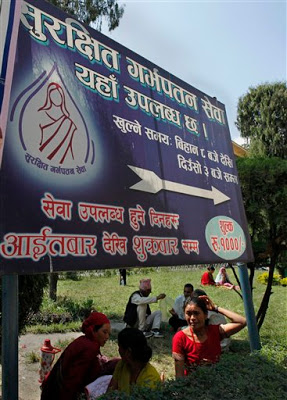 The way to lower (and someday hopefully eliminate) abortion is to teach real sex education and encourage the use of contraceptives.

The Guttmacher Institute did a survey of 197 countries regarding abortion. They found “roughly equal rates” of women seeking abortions in both countries with legal abortion and countries that had banned abortions. In other words, banning abortion not only didn’t eliminate abortions, it didn’t even lower the number of abortions.

In countries without legal abortion, women just go to a country where it is legal (as Irish women go to Europe) or they seek illegal (and dangerous) abortions (as women in Africa and South America do). In fact, illegal abortions kill at least 70,000 women each year — leaving nearly a quarter of a million children without mothers. Another 5 million women develop serious complications.

Oddly enough, there is a proven way to lower the rate of abortions — contraception. The Guttmacher Institute found that there were 45.5 million abortions in 1995. By 2003, that number had dropped to 41.6 million in spite of an increase in population. The change is due to a wider use of contraceptive methods.

The facts are clear. If you hate abortion and want to eliminate it, banning abortion will not do it. That will only kill and seriously injure many women. The way to lower (and someday hopefully eliminate) abortion is to teach real sex education and encourage the use of contraceptives.

No one likes abortion. It just can’t be eliminated by simplistic thinking or laws.