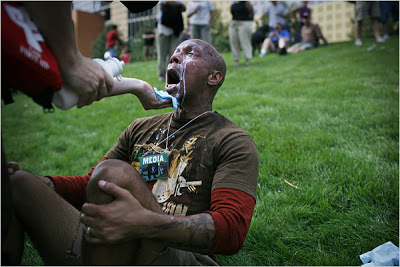 In the months leading up to the Republican National Convention, the FBI-led Minneapolis Joint Terrorist Task Force actively recruited people to infiltrate vegan groups and other leftist organizations and report back about their activities. On May 21, the Minneapolis City Pages ran a recruiting story called “Moles Wanted.” Law enforcement sought to preempt lawful protest against the policies of the Bush administration during the convention.

Since Friday, local police and sheriffs, working with the FBI, conducted preemptive searches, seizures and arrests. Glenn Greenwald described the targeting of protestors by “teams of 25-30 officers in riot gear, with semi-automatic weapons drawn, entering homes of those suspected of planning protests, handcuffing and forcing them to lay on the floor, while law enforcement officers searched the homes, seizing computers, journals, and political pamphlets.” Journalists were detained at gunpoint and lawyers representing detainees were handcuffed at the scene.

“I was personally present and saw officers with riot gear and assault rifles, pump action shotguns,” said Bruce Nestor, the President of the Minnesota chapter of the National Lawyers Guild, who is representing several of the protestors. “The neighbor of one of the houses had a gun pointed in her face when she walked out on her back porch to see what was going on. There were children in all of these houses, and children were held at gunpoint.”

The raids targeted members of “Food Not Bombs,” an anti-war, anti-authoritarian protest group that provides free vegetarian meals every week in hundreds of cities all over the world. They served meals to rescue workers at the World Trade Center after 9/11 and to nearly 20 communities in the Gulf region following Hurricane Katrina.

Also targeted were members of I-Witness Video, a media watchdog group that monitors the police to protect civil liberties. The group worked with the National Lawyers Guild to gain the dismissal of charges or acquittals of about 400 of the 1,800 who were arrested during the 2004 Republican National Convention in New York. Preemptive policing was used at that time as well. Police infiltrated protest groups in advance of the convention.

Nestor said that no violence or illegality has taken place to justify the arrests. “Seizing boxes of political literature shows the motive of these raids was political,” he said.

Further evidence of the political nature of the police action was the boarding up of the Convergence Center, where protestors had gathered, for unspecified code violations. St. Paul City Council member David Thune said, “Normally we only board up buildings that are vacant and ramshackle.” Thune and fellow City Council member Elizabeth Glidden decried “actions that appear excessive and create an atmosphere of fear and intimidation for those who wish to exercise their first amendment rights.”

“So here we have a massive assault led by Federal Government law enforcement agencies on left-wing dissidents and protestors who have committed no acts of violence or illegality whatsoever, preceded by months-long espionage efforts to track what they do,” Greenwald wrote on Salon.

Preventive detention violates the Fourth Amendment, which requires that warrants be supported by probable cause. Protestors were charged with “conspiracy to commit riot,” a rarely-used statute that is so vague, it is probably unconstitutional. Nestor said it “basically criminalizes political advocacy.”

On Sunday, the National Lawyers Guild and Communities United Against Police Brutality filed an emergency motion requesting an injunction to prevent police from seizing video equipment and cellular phones used to document their conduct.

During Monday’s demonstration, law enforcement officers used pepper spray, rubber bullets, concussion grenades and excessive force. At least 284 people were arrested, including Amy Goodman, the prominent host of Democracy Now!, as well as the show’s producers, Abdel Kouddous and Nicole Salazar. “St. Paul was the most militarized I have ever seen an American city to be,” Greenwald wrote, “with troops of federal, state and local law enforcement agents marching around with riot gear, machine guns, and tear gas cannisters, shouting military chants and marching in military formations.”

Bruce Nestor said the timing of the arrests was intended to stop protest activity, “to make people fearful of the protests, but also to discourage people from protesting,” he told Amy Goodman. Nevertheless, 10,000 people, many opposed to the Iraq war, turned out to demonstrate on Monday. A legal team from the National Lawyers Guild has been working diligently to protect the constitutional rights of protestors.

[Marjorie Cohn is president of the National Lawyers Guild and a professor at Thomas Jefferson School of Law. She is the author of Cowboy Republic: Six Ways the Bush Gang Has Defied the Law and co-author of Rules of Disengagement: The Politics and Honor of Military Dissent (with Kathleen Gilberd), which will be published this winter by PoliPointPress. Her articles are archived at http://www.marjoriecohn.com/.]

This entry was posted in RagBlog and tagged Criminal Justice, Freedom of Expression, Freedom of Press, Police State. Bookmark the permalink.