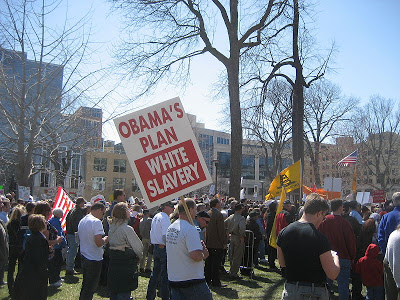 [Rich Benjamin’s commentary on the underlying “white grievance” currents in the Tea Party movement were buttressed Thursday, February 4, by the statements of Republican Tom Tancredo, the opening speaker at the Tea Party convention. (See Rachel Maddow video below.) Tancredo told attendees that President Barack Obama was elected because “we do not have a civics, literacy test before people can vote in this country,” an allusion to how Southern states used literacy tests as part of an effort to deny suffrage to African American voters before the civil rights era.]

The Tea Party movement is angling to be the most revolutionary force in American politics in name and in deed, since at least the 1960s counterculture. Only this time, the political insurgents command a party of Flour Power, not flower power.

The simmering movement is the whitest phenomenon on the national scene, evident not just in the millions of Caucasians committed to its cause, but in the bedrock beliefs stirring its anti-government contempt.

How fitting, therefore, that Sarah Palin keynote the movement’s first organized confab. Neglected in all the fevered conversation around the movement’s meteoric rise, and Palin’s selection, is any useful reflection on what the cause and this figurehead stand for: white racial resentment. Packed beneath her beehive is a spitfire brew of optimistic, yet aggrieved, whiteness. Palin embodies a bizarre, sometimes alluring, combination of triumph and complaint that many Caucasian Tea Partiers identify with through and through.

Deciphering the racial codes on the movement’s ubiquitous placards does not require a doctorate in semiotics. One popular sign shows the president’s face and a caption: “Undocumented worker.” Another combines Obama’s image with this caption: “The Zoo Has an African Lion and the White House Has a Lyin’ African!”

Aside from the festive, ad hominem attacks against President Obama, the Tea Party’s leaders and its rank-and-file rarely mention race in debate, instead tucking it just under the surface of “nonracial” issues like health care reform, public spending, immigration, and pointedly, taxes.

Palin voices the right-wing drumbeat warning Americans that “government is on your back” and “you should keep your own money.” Alongside other avid Tea Party supporters like Tom Tancredo and Glenn Beck, Palin gins-up conservative whites’ existing resentment over race, carping over the “high taxes” for public services assumed to be wasted on “illegals” and minorities.

Denouncing government assistance and free school lunches at a town hall meeting in late January, South Carolina Lieutenant Governor Andre Bauer, a Tea Party supporter, said: “My grandmother was not a highly educated woman, but she told me as a small child to quit feeding stray animals. You know why? Because they breed. You’re facilitating the problem if you give an animal or a person ample food supply. They will reproduce, especially ones that don’t think too much further than that.”

At a Tea Party rally in Boone County, Kentucky (roughly 92 percent non-Hispanic white), Congressman Geoff Davis called cap-and-trade legislation “economic colonization of the hardworking states that produce the energy, the food, and the manufactured goods of the heartland, to take that and pay for social programs in the large coastal states.” In Tea Party-speak, “heartland” often means “white” — what Palin calls “the real America” — while “coastal state” means the urbanized communities that teem with racial minorities, doubling as “gateway states” for Latino immigrants.

“Immigrants are 21 percent of the uninsured, but only 7 percent of the population. This means white folks on Medicare or headed there will see benefits curtailed, while new arrivals from the Third World, whence almost all immigrants come, get taxpayer-subsidized health insurance,” gripes Patrick Buchanan on his blog. “Any wonder why all those Tea Party and town-hall protests seem to be made up of angry white folks?”

The bar-stool version of the Tea Party canard goes like this: Why should we, self-sufficient small-town whites, pay taxes to support all those welfare queens, food stamp cheats and Medicaid layabouts in the big cities and coastal states? The media’s version, parroted by Palin and other Fox talking heads, commiserates with Americans in the heartland, christened “the average taxpayer,” for unjustly having to subsidize ethnic enclaves that mooch off the national treasury.

All of this is not to say that any given rank-and-file member of the movement personally despises racial minorities. Rather, the Tea Party ethos is a direct descendant of the anti-tax segregationist politics that swept the South in the 1950s and ’60s.

These suburban and exurban Republicans intimately understood their constituents’ disdain for court-ordered desegregation. They fueled the rising mania for “individual freedom,” “privatization,” “states’ rights” and social homogeneity that once defined their Southern home turf and now defines the Tea Party.

To pernicious effect, white Tea Partiers cloak themselves in the anachronistic rights-based outlook fine-tuned by ’60s-era women and minorities. What’s the difference between Sarah Palin and Al Sharpton? Lipstick. Pay closer attention: Palin is quite like the Baptist preacher from Harlem, only paler. Sharpton’s exurb-lovin’, carpoolin’, straight-talkin’ doppleganger has her hands tied fightin’ for an aggrieved “silent majority” — or is it a vocal soon-to-be racial minority? By 2050, non-Hispanic whites will be less than half the population.

“Tea Party Nation is a user-driven group of like-minded people who desire our God given Individual Freedoms which were written out by the Founding Fathers,” according to the convention’s Web site. Tea Partiers will bend your ear about “freedom from government” or their “Hunters’ and Fishers’ Bill of Rights.”

This white-inflected rights-based outlook champions individual and neighborhood “freedoms,” withdrawn from the common nation, preoccupied by private interest, poised to behave according to private caprice. Tea Partiers contrive the right to live, make money, own property, zone neighborhoods, or protest taxes at will, without regard to the common good, a troublesome offshoot of rights-based agitprop.

Race is the subtext of now-potent populist appeals to whites, who feel battered from a tsunami of economic and cultural change. The Tea Party counterculture is waging a proxy war over race during America’s rapidly shifting economy and demographic makeup.

The Tea Party is sounding a siren call of aspiration and a primal scream of resentment — a whoop to Flour Power.

[Rich Benjamin is the author of Searching for Whitopia: An Improbable Journey to the Heart of White America. He is senior fellow at the nonpartisan think tank Demos and sits on the board of the Roosevelt Institution. His commentary is featured on NPR and Fox Radio, and in newspapers nationwide. This article first appeared on AlterNet.]