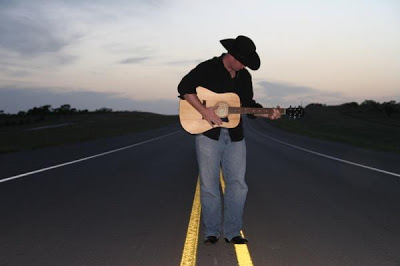 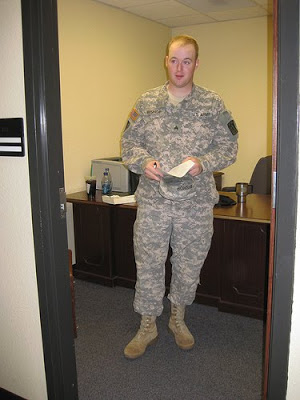 Incarcerated anti-war GI and musician (above) Travis Bishop. Below, he is shown before his court martial at Fort Hood in Killeen, Texas on Aug. 14, 2009. Photo by Alice Embree / The Rag Blog.
Army prisoners isolated,
Denied right to legal counsel

[Travis] Bishop, who served a 13-month deployment to Iraq and was stationed at Fort Hood, Texas, was court marshaled by the Army for his refusal to deploy to Afghanistan. Given that he had already filed for CO status, many local observers called his sentencing a ‘politically driven prosecution.’

The military’s treatment of Army prisoners is “part of a broader pattern the military has of just throwing people in jail and not letting them talk to their attorneys, not letting visitors come, and this is outrageous. In the civilian world even murderers get visits from their friends,” according to civil defense attorney James Branum.

Bishop, who is being held by the military as a “prisoner of conscience,” according to Amnesty International, was transported to Fort Lewis on September 9 to serve a 12-month sentence in the Regional Correctional Facility. He had refused orders to deploy to Afghanistan based on his religious beliefs, and had filed for Conscientious Objector (CO) status. years.

Bishop, who served a 13-month deployment to Iraq and was stationed at Fort Hood, Texas, was court marshaled by the Army for his refusal to deploy to Afghanistan. Given that he had already filed for CO status, many local observers called his sentencing a “politically driven prosecution.”

By holding Bishop incommunicado, the military violated Bishop’s legal right to counsel, a violation of the Sixth Amendment to the US Constitution, according to his civil defense attorney James Branum.

The Sixth Amendment is the part of the Bill of Rights that sets forth rights related to criminal prosecutions in federal courts, and reads, “In all criminal prosecutions, the accused shall enjoy the right to a speedy and public trial, by an impartial jury of the State and district where in the crime shall have been committed, which district shall have been previously ascertained by law, and to be informed of the nature and cause of the accusation; to be confronted with the witnesses against him; to have compulsory process for obtaining witnesses in his favor, and to have the Assistance of Counsel for his defense.”

Attorney LeGrande Jones, who practices in Olympia and was designated by Branum as the local counsel for Bishop, was also denied access to Bishop, on the grounds that Jones was on an unnamed and unobtainable “watch-list,” which constitutes deprivation of counsel.

Until September 18, Bishop’s condition was unclear due to his having been completely cut off from the public.

Branum, who is the legal adviser to the Oklahoma GI Rights Hotline and co-chair of the Military Law Task Force, also represents Leo Church, another war resister being held at Fort Lewis.

Church, who was also stationed at Fort Hood, went AWOL (Absent Without Leave) to prevent his wife and children from becoming homeless. The fact that he was unable to financially support his family off his military pay alone dictated that Church seek other means to support them. With his pleas to the military for assistance going unheeded, he opted to go AWOL in order to support his dependents.

According to Branum, “Church received eight months jail time because he put the safety and welfare of his children over his obligation to the Army. Leo tried to get help from his unit, but was denied.”

Branum told Truthout that Church had been able to contact him while at Fort Lewis, but the call was monitored by a guard, violating his attorney-client privilege.

Gerry Condon, with Project Safe Haven (an advocacy group for GI resisters in Canada), and a veteran himself as a member of the Greater Seattle Veterans for Peace, told Truthout he believes Bishop and Church are being held in a way that is both “intolerable and unconstitutional.”

Condon, who is working to try to support both Bishop and Church, told Truthout, “They are denied all visitors, except for immediate family, clergy and legal counsel [legal counsel is limited at this time]. No friends or fiancés. This is not the normal practice at other brigs.”

Branum told Truthout he feels that how Bishop and Church are being treated at Fort Lewis is “part of a broader pattern the military has of just throwing people in jail and not letting them talk to their attorneys, not let visitors come, and this is outrageous. In the civilian world even murderers get visits from their friends.”

Speaking further of the conditions in which the military is holding Bishop and Church, Condon added, “Fort Lewis authorities have made it virtually impossible for Bishop and Church to make phone calls. They must first get money on their calling account. This must be done by money order and according to several other similarly prohibitive procedures. And the money may not be credited to the account until a month after it is received. Plus, officials at the Fort Lewis brig must approve the names of people that can be called.”

Condon told Truthout, “Travis Bishop is a leader in what has become an international GI resistance movement that is attempting to bring troops home from both occupations by following their consciences and international law. They deserve all the support we can give them, especially while they are in prison – they are owed their constitutional liberties.”

Branum told Truthout that as far as he knows, he may well be the only person on Bishop’s call list.

Both Bishop and Church have been prevented from adding any names to their respective “authorized contacts” lists (even for family members), which effectively cuts them off from almost all contact with the outside world. According to Branum, mail and commissary funds sent by friends and supporters will likely be “returned to sender” due to what he feels is “a cruel and inhumane policy.”

“By participating in work programs and school classes, soldiers being held in brigs can get time cut off their sentences,” Branum explained to Truthout, “But these don’t exist at Fort Lewis, so that means Travis and Leo can’t get time taken off their sentences. Travis will do a minimum of 10 months, and could have theoretically worked an additional month off his sentence if Fort Lewis had these programs.”

Branum, who is the lead attorney for both Bishop and Church, told Truthout the actions of officials at Fort Lewis violate his clients’ constitutional rights.

“Bishop and Church’s defense team and supporters are in the process of negotiating with Fort Lewis officials to ensure transparency and that Bishop and Church’s legal rights are being met,” Branum stated in a press release on the matter that was published on September 17. “The unusual circumstances of isolation of these soldiers is unquestionably illegal. If Fort Lewis doesn’t change its ways, we will be forced to go to court and demand justice.”

On September 18, officials at Fort Lewis finally allowed Branum to speak with Bishop on the telephone, but not privately.

Bishop was accompanied by two guards, who monitored his conversation with Branum. In addition, Fort Lewis authorities claimed that the recently rebuilt/remodeled brig does not yet have proper facilities to facilitate a private telephone conversation.

Speaking further about the conversation he was finally allowed to have with Bishop, Branum added, “In the phone call we did get to do, they still refused to let Travis talk to me privately. He actually had two guards in the room with him the entire time, which obviously negates any compliance with attorney-client privilege. And presumably the phone call was taped (all of the other brigs have special rooms for attorney calls, that have phone lines to the outside that are not taped) which is completely unconstitutional. The brig of course will say, “well we won’t listen to that tape” but that is bullshit, and it is illegal.”

“The only reason they [Fort Lewis authorities] let me talk to Travis on Friday [September 18] was that he was finally “medically cleared,” Branum told Truthout, “This took 10 days in this case, and it looks like this is their standard operating procedure, which is completely wrong.”

When Truthout questioned the public affairs office at Fort Lewis about Bishop’s situation, we were told all matters were being handled “legally, and according to standard operating procedure,” and “any wrongdoing would be investigated.”

Branum added, “They are giving the excuse that “we don’t have the secure room for attorney phone calls set up yet,” but can’t tell me when they are going to have the room set up.”

Branum and Jones are planning to file a lawsuit against Fort Lewis in the near future, specifically targeting the denial of attorney-client privilege.

Both soldiers are being supported by two GI resistance cafes: Under the Hood cafe (in Killeen, Texas, near Fort Hood) and Coffee Strong (in Tacoma, Washington, near Fort Lewis).

[Dahr Jamail, an independent journalist, is the author of The Will to Resist: Soldiers Who Refuse to Fight in Iraq and Afghanistan, (Haymarket Books, 2009), and Beyond the Green Zone: Dispatches From an Unembedded Journalist in Occupied Iraq, (Haymarket Books, 2007). Jamail reported from occupied Iraq for nine months as well as from Lebanon, Syria, Jordan and Turkey over the last five years.]