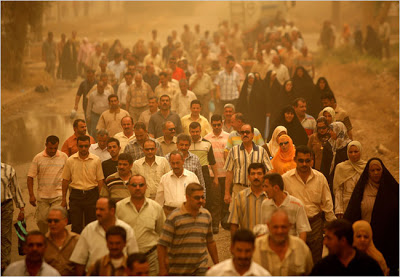 BAGHDAD — Hampered by years of violence, a decimated infrastructure, a lack of foreign investors and a flood of imports that undercut local businesses, Iraq’s private sector, particularly its small non-oil economy, has so far failed to flourish as its American patrons had hoped.

In its absence, the Iraqi government has been sustaining the economy the way it always has: by putting citizens on its payroll. Since 2005, according to federal budgets, the number of government employees has nearly doubled, to 2.3 million from 1.2 million.

The impetus is not only economic: In exchange for abandoning the insurgency that plunged the nation into civil war, many of the 100,000 members of civilian patrols known broadly as the Awakening movement have been promised jobs in the security forces or in reconstruction, though many Sunni Muslim members complain it is not happening quickly enough.

But this growth has not come without problems. Already, a huge wage increase to government workers that was instituted — but then suspended because of fears that it was pushing up inflation — has underscored the difficulties of being far and away the largest employer in an unstable country.

In 2006, 31 percent of Iraq’s labor force was working in the public sector, according to the agency for statistics in the Ministry of Planning. The agency expects that figure to reach 35 percent this year, about 5 percentage points short of where the C.I.A. estimated it to be on the eve of the 2003 invasion.

This figure is not atypical for the region, but it hardly indicates the free market state initially envisioned by the United States-led Coalition Provisional Authority, which pushed for full and rapid privatization in its first few months.

“For all the talk about the private sector taking off in Iraq, it didn’t materialize,” said Haider al-Abbadi, who is on the parliamentary economic committee, and is disappointed by Iraq’s reversion to its old statist habits. “People would say, ‘Well, these people are poor; we need to help them.’ It’s true, but we didn’t create jobs. I think this is a huge problem.”

While some ministries need to keep growing — the Defense and Interior Ministries, which each include Iraqi security forces, account for about a third of government employees — others have tried to curtail hiring.

“I think that the government itself has been concerned about keeping a cap on the number of people that can join the public sector,” said Jorge Araujo, the lead economist for Iraq at the World Bank.

But to combat unemployment, a factor contributing to much of Iraq’s violence, there are few other options right now. Nothing sent recent graduates and out-of-work Iraqis scrambling to land civil service jobs more than the hefty raises that went into effect in June.

Given how large a proportion of the country’s population is on the government payroll, this series of wage increases, like the two that came before, in 2003 and 2007, was essentially a form of widespread economic relief. The salaries of many Iraqis were more than doubled.

Some economic advisers and members of Parliament worried that a raise for government workers could be a nightmare for others when a sudden flood of cash poured into the market. They argued that the raises should be phased in gradually to prevent a spike in inflation, which, at around 14 percent — a sea change from two years ago, when it neared 70 percent — has largely been tamed by a disciplined fiscal policy, robust oil revenues and an influx of low-cost imports.

But Iraqi citizens were desperate for the money. And lawmakers were thinking about elections.

“When people see a sudden pay raise, they will spend,” said Mr. Abbadi, who supported the phased approach. “To be frank, we have not been fair to the poorer people, or people without jobs, or people not on the payroll of the government.”

For a short time, the raises were a windfall for a handful of privately owned businesses — like the gold shops and car dealerships that cater to the doctors, lawyers, engineers and teachers of the public sector.

“This is the best season I’ve ever had,” said Muhammed Aziz, 36, sitting behind the counter of his bustling gold shop in the Kadhimiya neighborhood.

But even government employees were wary. “When our salary was increased, it came along with rising prices in the market,” Tamathaer Hameed, 27, a professor of Arabic who was browsing for rings in Mr. Aziz’s gold shop, said of the last round of wage hikes. “It’s an economic circle.”

This entry was posted in RagBlog and tagged Capitalism, Economy, Iraq. Bookmark the permalink.