Progress Toward a Ban on Cluster Munitions 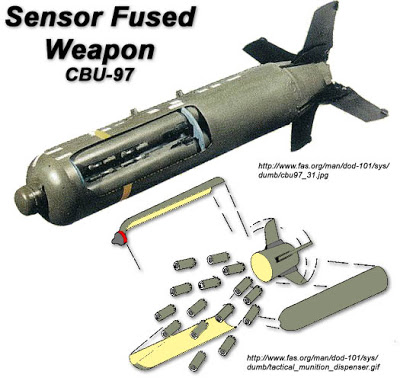 Activists are urging governments to sign an international treaty to ban the use, production and stockpiling of cluster bombs one month from now in Oslo. The Cluster Munition Coalition says global momentum is growing to put an end to these weapons, which the group says mainly maim and kill civilians. Lisa Schlein reports for VOA from Geneva.

A Group of Governmental Experts is meeting at the United Nations to negotiate a treaty on cluster munitions. The agreement aims at striking, what it calls, a balance between military and humanitarian considerations.

The Cluster Munition Coalition calls the process flawed. It says the draft text being discussed will do nothing to stop the death and destruction from cluster bombs. It says the text proposes a 13 to 20-year transition period in which States would be able to continue to use, produce, stock pile and trade these weapons.

On the other hand, Coordinator of the Coalition, Thomas Nash, says the Oslo treaty offers a holistic solution because it will ban an entire category of weaponry before it gets out of control.

“It has been largely preventive in nature,” he said. “Unlike the landmine problem, which spread to around 80, 90 countries before an international treaty was agreed to prohibit that weapon. So far, cluster munitions have only affected-I say only, it is already too much of a problem, but, only around 32 States or territories have been affected. So, in many ways, we are acting before the problem gets to the scale of landmines. Far too many people have been killed or injured by this weapon. ”

The Coalition says about 76 countries have stockpiled cluster bombs. It says it is the billions of sub-munitions contained within these weapons that create all the damage. It says the U.S., with nearly one billion sub-munitions, possesses the biggest arsenal in the world.

It says 34 countries produce cluster bombs. The biggest producers are the United States, Russia and China. Others include Britain, Germany, France, Israel and Brazil. It says the number of victims is unknown, but may be in the hundreds of thousands.

About 100 countries are expected to sign the Oslo Treaty next month. The U.S., Russia and China are major holdouts. Co-Chair of the Coalition, Steve Goose, agrees this is problematic. But, says it will not lessen the impact of the agreement.

“We believe in the power of the stigma against the weapon,” said Steve Goose. “We have seen this very clearly with anti-personnel landmines. That same litany of States that we just ran through-U.S., Russia, China, India, Pakistan, Israel-none of those States are part of the landmine treaty either 10 years later. And, yet, we see that the stigma of the weapon has had a very powerful deterrent affect on those States.”

Goose says the United States has not used, produced and traded in landmines since the treaty was signed. And, it has destroyed millions of its stockpiles.

He says almost none of the 39 countries that did not join the agreement have used this weapon. He says Burma was the only State that used landmines in any significant way last year.

He says even those States that stay outside the treaty have to bend to the new standard of behavior that is being established internationally.

This entry was posted in RagBlog and tagged U.S. Military, United Nations. Bookmark the permalink.