Progressive Taxation and the Sad Saga of Joe the Plumber 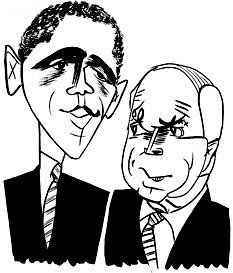 Illustration by Tom Bachtell / New Yorker.
It all started with Adam Smith
by Steve Coll / October 27, 2008

The rise and fall of Joe the Plumber as a symbol of the American self-made man’s resistance to progressive taxation began on October 12th, outside Toledo, Ohio. As Senator Barack Obama campaigned for the Presidency in a neighborhood of modest homes, a man named Samuel J. (Joe) Wurzelbacher approached. He said that he was getting ready to buy a company that earned about a quarter of a million dollars a year, and he asked if his taxes would rise under Obama’s economic plan. The Senator acknowledged that they might. “Nobody likes high taxes,” Obama said. “Of course not.” Still, he explained:

I do believe that for folks like me who’ve worked hard but frankly also been lucky, I don’t mind paying just a little bit more than the waitress who I just met over there. . . . She can barely make the rent. . . . And I think that when you spread the wealth around, it’s good for everybody.

The principle that Obama evinced, which most economists would regard as unexceptionable, can be traced to Adam Smith. In “The Wealth of Nations” (1776), his seminal treatise on capitalism, Smith wrote:

The necessaries of life occasion the great expense of the poor. . . . The luxuries and vanities of life occasion the principal expense of the rich, and a magnificent house embellishes and sets off to the best advantage all the other luxuries and vanities which they possess. . . . It is not very unreasonable that the rich should contribute to the public expense, not only in proportion to their revenue, but something more than in that proportion.

Smith’s notion of reasonableness did not anticipate the Fox News Channel, however. Last Tuesday, Wurzelbacher appeared on that network, where he denounced Obama’s comments as “socialist.” He said that Obama “scared me,” because he “wants to distribute wealth.” Wurzelbacher also granted an interview to the advocacy group Family Security Matters, whose advisory board includes the conservative talk-radio hosts Laura Ingraham and Monica Crowley. By means unknown, Joe’s story of ambition and resentment reached the campaign of Senator John McCain.

Early in last Wednesday’s televised debate, McCain brought up Joe’s supposed worries about Obama’s proposed tax rates for wealthy Americans and set off one of those cascading episodes of goofiness that sometimes overtake people who are tired. During a prolonged colloquy in which “Joe the Plumber” was invoked more than two dozen times, McCain accused Obama of waging “class warfare.” Each office-seeker spoke to Joe, “if you’re out there,” as if he were a lost child. At one point, McCain referred to Wurzelbacher as “my old buddy Joe, Joe the Plumber,” sounding as if he might launch into song.

McCain’s reification of Joe’s working-class-rooted virtue portended Dreiserian revelations, and, sure enough, reporters quickly discovered that Wurzelbacher was not everything he seemed. He lacked a license to perform plumbing or contracting work; a lien had been filed against him for nonpayment of taxes; and he told Katie Couric, of CBS News, that in truth he is not at present expecting to enter the high tax bracket he had mentioned to Obama. Wurzelbacher’s prospects for participating in Sarah Palin’s 2012 Joe Six-Pack tour may also have been dented when, speaking to Couric, he described Obama’s remarks on tax policy as a “tap dance . . . almost as good as Sammy Davis, Jr.”

Of the several morals lurking in this postmodern fable, the least surprising is the reminder that McCain’s campaign believes that it cannot afford to be heavily burdened by facts while constructing attacks against Obama’s candidacy. Also familiar is the example of McCain’s sloppy decision-making. The Ordinary Joe charade was transparently conceived to poke at Obama’s vulnerability with white, independent voters in culturally conservative industrial states. Unfortunately for McCain and his staff, they apparently did not think to vet an important new anecdote that they planned to spring upon a national television audience at a decisive moment of the campaign.

That oversight has rebounded on McCain, of course, but, more important, his phony war on taxes has diminished the last phase of the campaign. In the maw of the worst banking and financial crisis since the Great Depression, McCain has repeatedly dumbed down the debate on economic policy. His focus on pork-barrel spending and the top marginal tax rates of the richest Americans has obscured the seriousness of the crisis, whose causes have nothing to do with either of those issues. Some economists expect the country’s unemployment rate to rise from its current level, of about six per cent, to as high as ten per cent, which would be the highest in a generation; more than a million American families have already had their homes foreclosed upon during the past two years, and in August foreclosure filings reached a record high. McCain, perhaps because he honed his policy instincts during the Reagan era, when marginal tax rates were a big deal, or perhaps because he just doesn’t know what else to talk about, has deflected debate from the difficult, complicated choices that must be made by the next President, such as what sort of economic stimulus plan to enact, and in what stages; which policies might keep the most families in their houses at the least cost; how to restructure market regulation to bring credit-default swaps and other derivatives under government oversight; and how to coördinate global reform of financial and trade imbalances.

McCain is right in detecting signs of growing class resentment; some of the angry are turning up at McCain-Palin rallies, where the mood has been not so much socialist as national-socialist. The cause of this resentment is not difficult to explain, and it has nothing to do with Obama’s modest tax proposals. Income inequality—the gap between the richest and the rest—increased dramatically during the Bush Administration. The main reason was that the rich became very, very rich, while middle- and working-class families saw their incomes stagnate or decline. Long before the Wall Street meltdown, rising gas prices and health-care bills pinched even those American households with incomes that rank squarely in the middle classes.

That is where the great majority of actual plumbers live, of course; they don’t make a quarter of a million dollars a year. In 2007, their average annual income was forty-seven thousand dollars, and that figure was buoyed by the recent housing boom. The Bureau of Labor Statistics publishes an income roll call of other occupations with which McCain, once a modestly paid military officer, has evidently lost touch: kindergarten teachers, $47,750; firefighters, $44,130; roofers, $36,340; dental assistants, $32,280; security guards, $24,480; home health aides, $20,850.

At the very bottom of the income ladder, the inflation-adjusted minimum wage—despite two increases in the past two years—remains essentially the same as it was when George W. Bush took office. That wage amounts to less than fifteen thousand dollars a year, before taxes—and, yes, there are taxes to be paid even at that level. The number of Americans living in poverty has grown by more than five million since 2000. And there’s no way to say that ain’t so.