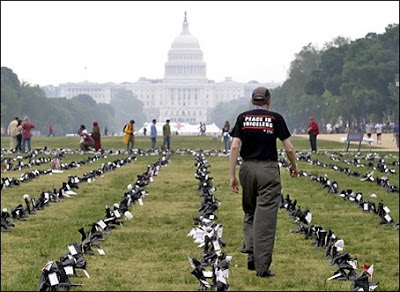 10. If you want to breed and train more would-be terrorists who hate the USA, the best way to do so is attacking Afghan villages where key Al Qaeda cells have left to regroup elsewhere.

9. If you want to keep Afghan women powerless, ignore the advice of their own leaders that grass-roots economic development is crucial — and send the Marines instead, to boost the power of macho warlords who gather loyalty by fighting foreign invaders.

8. If you want to make sure that no one is learning that government could do good things like building schools and community health clinics in America, hiring teachers and writers and railroad construction workers, feeding hungry children, or renewing our rotting sewer system — then sink hundred of billions of dollars into this war so as to bankrupt domestic-needs programs.

7. If you want to make even higher profits from burning oil and coal instead of letting America invest in creating a wind/solar renewable energy network that will heal the climate crisis, free us from coal and oil, and make America competitive again — a multi-billion-dollar war is terrific.

6. If you want to stymie all investigations into past use of torture and “extraordinary rendition” by past U.S. governments and utterly negate the closing of Guantanamo, multiplying prisoners in Bagram (Afghanistan) will help a great deal.

5. If you like to knit blankets for legless veterans while making sure the Veterans Administration is so swamped with the wounded that they have to wait months in rat-infested wards for treatment, more maimed soldiers are by far the best result of a war.

4. If you are trying to do research on the suicide rate, homeless rate, and other symptoms of post-traumatic stress syndrome in returning soldiers, there will never be a better milieu for producing experimental subjects.

3. If you want to create a surge of right-wing populist rage that will shatter the Democratic Party and elect Sarah Palin president in 2012, then combine thousands of dead and maimed American soldiers with millions of unemployed American workers.

If you can think of two more, please add them by clicking to this article on our website at The Shalom Center and commenting at the bottom of the page. Also add your own reasons as comments to this article on The Rag Blog. AND — if you think all these are terrible reasons and would like to tell your Senators to oppose sending more troops, please click here to, and fax them. We have provided a usable letter; we welcome your adding your own thoughts.