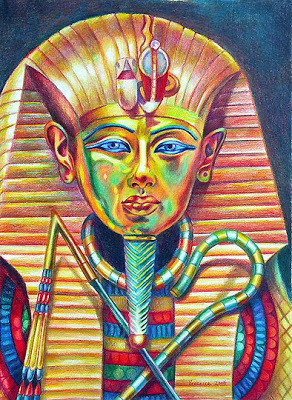 Pharaoh 2 by Veronica Winters.
Knowing a Pharaoh when you see one…
Creating a Freedom Seder for the Earth
By Rabbi Arthur Waskow / The Rag Blog / December 15, 2008

What do the Iraq War, the drowning of New Orleans, the collapse of Lehman Brothers, the great Australian drought, and the Senate’s refusal to assist the auto industry all have in common?

They are all the products of arrogance, hard-heartedness, and the addiction of power-holders to their power, even when their misuse of it is ruining their own society. The job description of Pharaoh.

The most recent act of institutional pharaohs was the Senate’s refusal to save the auto industry, even though the proposals for Federal action included strong measures to assure high-mileage, low-emission cars and even though the industry’s collapse would threaten millions of American jobs and the probable onset of another Great Depression.

Or maybe we should say not “even though” but “Because”! That is, some of the Senators who voted No have been in the pockets of Big Oil and Gas for decades, are not anxious to create a low-petroleum auto industry, and are also delighted to shatter the decent wage structure of unionized Detroit.

For those senators, the sticking point was the United Auto Workers’ insistence that the wage reductions they agreed to not go into effect till 2011. Perhaps the union was hoping that a new auto industry, with electric cars and many other innovations, could recreate an American market and save their union. But No, like any pharaoh the senators wanted to break any autonomous center where many people who as individuals have little power can gather to face those few who have a great deal. Just as Pharaoh wanted to turn independent farmers and shepherds into slaves.

In the biblical story of Pharaoh, he begins by hardening his own heart, and then God hardens his heart. What has happened to Pharaoh’s “free will”? He has addicted himself. He has snorted the cocaine of absolute power and hardhearted arrogance so often that he can no longer choose freely, any more than a crack addict can. His own fate and that of his country are sealed when his own advisers come to him to schrei Gevalt: “Do you not see, you are destroying Egypt!” — and he cannot stop. (Exod. 10:7)

What are the consequences of Pharaoh’s arrogance? What we call the “Ten Plagues.” Oppression of workers becomes oppression of the earth. The Plagues are all what we would today call “ecological disasters”: The rivers, undrinkable. The crops, eaten by locusts. Climate disaster: the most destructive hailstorms in history. Mad cow disease. Dust storms so thick, so strong, that no one could see his hand before his face: a “darkness” so thick that you could touch it.

In our own day, the time has come to gather God’s power in the people. The Chicago workers who took over the Republic Windows and Doors factory — its owners had decided to shut down while they moved the jobs overseas – those workers were following in the steps of Moses, the organizer of Bricklayers Union Local One. And they won!

We who understand how the institutional pharaohs are bringing deadly Plagues upon the earth and our grandchildren must also organize, at every level.

One level: For the week beginning on Thanksgiving Day, Rabbi Phyllis Berman and I were in Sweden. With Rabbi Avraham Soetendorf of the Netherlands and Professor Hava Tirosh-Samuelson (who edited the Harvard University volume on Judaism and ecology), we brought Jewish wisdom to weave with many other spiritual teachings — Buddhist, Russian Orthodix, Native American, Muslim, Catholic, Lutheran, Wiccan (brought by Starhawk — the first time, she qupped, that an Archbishop has welcomed a witch) at the Interfaith Summit on the Climate Crisis called by the Archbishop of the Church of Sweden and opened by Sweden’s Crown Princes. Our roots were “religious”; we worked to birth a fruitful “politics.”

In another Shalom Report, I will share what happened during that week in Sweden. Meanwhile, another level:

It was nationally published, was physically celebrated at a Black church in Washington DC on April 4, 1969 — the first anniversary of the death of Martin Luther King — and had a profound impact on the way in which American Jews have celebrated Passover ever since. – For it freed many many Jews to shape Seders to address the many issues of freedom in our own day.

So this spring, The Shalom Center is already working to create a 40th anniversary Freedom Seder that will focus on the Ten Plagues that the pharaohs of pur pwn time are bringing on the earth today, and match them with Ten Blessings that we ourselves can bring to heal our wounded planet.

Blessings of Green Jobs and Green Energy, blessings of workers’ rights to resist environmental and economic disaster, blessings of thwarting the racism that has condemned millions of Africans to drought and death, blessings of peaceful transformation out of fossil fuels instead of war after war to control the reservoirs of the oil to which our economies have become addicted.

The Shalom Center has already brought together a working committee in Washington DC, in which Muslims and Christians have begun to work with a strong nucleus of Jews to plan the time, the place, the form of this Seder.

And we intend to stimulate the celebration of such Seders all across America.

On this, as well as on the Interfaith Summit in Sweden, we will be writing more. Meanwhile, if you are interested in having your community hold such a Seder, let us know.