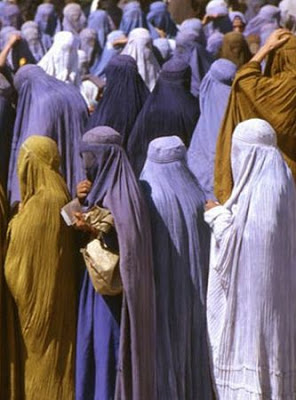 Afghani women: Offer micro-loans for economic development. Photo from UNHCR.
Remembering Pharaoh, Plagues and Exodus…
Afghanistan: There has to be a better way

When some of us outside Washington (and even some inside) say there must be some other way of dealing with Afghanistan, Good Old Official Formal U.S. (GOOFUS) says this is a cockamamie notion. So The Shalom Center is going to put forward four cockamamie plans. Read on!

This pattern is a very old story. In the Bible, it is called Pharaoh, Plagues, and Exodus.

On Sept. 10, 2009, Matthew Hoh, a senior U.S. diplomat and former Marine resigned from the U.S. Foreign Service after serving more than five years in Iraq and five months in Afghanistan.

This week the Washington Post published his letter and reported he has been invited to meet with Vice President Biden’s staff.

I fail to see the value or the worth in continued U.S. casualties or expenditures of resources in support of the Afghan government in what is, truly, a 35-year old civil war. The Pashtun insurgency, which is composed of multiple, seemingly infinite, local groups, is fed by what is perceived by the Pashtun people as a continued and sustained assault, going back centuries, on Pashtun land, culture, traditions and religion by internal and external enemies. The United States military presence in Afghanistan greatly contributes to the legitimacy and strategic message of the Pashtun insurgency.

The Shalom Center offers four cockamamie ideas for U.S. policy in Afghanistan, two of which are already under official consideration inside the Washington Beltway.

Of the four, which plan is least cockamamie — most likely to save American lives, benefit American society, save Afghan lives, and help self-government grow at the grass roots in Afghanistan?

The Shalom Center is posting this letter on our website at www.theshalomcenter.org and welcomes you to write your own comments there. On the website you will also find a “take action” memo for writing your Senators about Afghanistan, as well as a longer note about urging your Senators to act on global scorching and the climate crisis.

Remember: both issues are at a crossroads, a crucial choice point. We the People can make a difference.

P.S. – For David Hoh’s full letter of resignation from the Foreign Service and his analysis of present failures in Afghanistan, go here.