Rabbi Arthur Waskow : The Politics of Gaza and Beyond 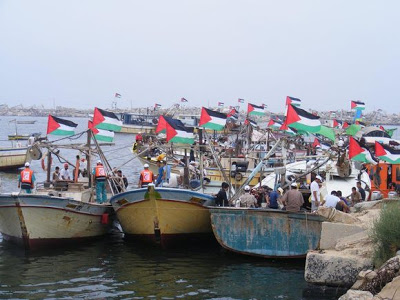 The SS Free Gaza and the SS Liberty, with human rights workers and supplies from the Free Gaza Movement successfully landed in Gaza early the evening of Aug. 23, 2008, breaking the Israeli blockade of the Gaza Strip: has been a model for creating pressure for peace.

The alternative for Hamas would have been to multiply the approach of the nonviolent boatloads of people who were in the last month bringing supplies to Gaza, ignoring or violating the Israeli blockade. This approach was building support in much of the world, pointing out the injustice and violence of the blockade. Instead of canceling the cease-fire and aiming rockets once again, Hamas could have turned those boats into a multitude. They might have built an enormous popular pressure in Europe and the US for an end to the blockade and negotiations between Israel, the various powers, and Hamas.

Can Hamas still take this turn toward a powerful nonviolent politics instead of a weak and dead-end military pop-gun? Much harder now. Their knee-jerk response will be to keep up enough military action to suck Israel into a land invasion and terrible carnage. Perhaps that was their intention all along. The result will be lose-lose. It will take profound rethinking to pursue a win-win path. All the sticks in the world are not likely to beat such a response out of Hamas. Carrots might, and that requires strong US support for such a move.

The alternative for the Israeli government would be to say (instead of scornfully rejecting the Saudi/Arab League proposal for a region-wide peace settlement among Israel, all Arab states, and a viable Palestinian state): We encourage it, and encourage its proponents to press Hamas to join in, while making clear that for us the deal must include only very small symbolic numbers of Palestinian refugees returning to Israel itself, and control of the Jewish Quarter and the Western Wall in the Old City of Jerusalem. And we encourage, instead of blocking, a Palestinian government of national unity, including Hamas as well as Fatah.

And — We will negotiate directly with Hamas toward ending the blockade, welcoming European and Egyptian aid and investment, releasing the members of their parliament we are holding in jail, and in exchange, get an end to the rocket attacks by Hamas, a commitment to at least fifty years of “calm” or “truce,” and their acceptance of governmental responsibility to control other groups that may try to continue.

Can an Israeli government take such steps? Perhaps now any Israeli government can do this and say that they have not rewarded terrorism, are not negotiating from weakness, have shown they can be bloody. But would they want to? That too would require a deep rethinking, because it would mean a serious commitment to ending the occupation of the West Bank and East Jerusalem, as well as the blockade of Gaza. Settlers and other opponents of doing this will, though fewer in numbers than those who will support it, be much more intense in their opposition. So the government is likely to be paralyzed, refusing to do what is necessary for peace, resorting to old slogans and the institutional and cultural power of the military to justify paralysis.

So the necessary counterweight for this domestic paralysis will have to come from outside — that is, the United States.

The alternative policy for the US government would be to use the disaster of these reciprocal attacks to call for all the above: To insist on a regional Middle East peace conference, to insist that even a Netanyahu government of Israel and even a Hamas leadership of Gaza or Palestine take part and accept a decent peace, to connect the end of the US occupation of Iraq with serious diplomacy with Iran and a political settlement of the Afghan agony; to move swiftly off the fossil fuel addiction that drives a planetary disaster and drives American policy into corruption or conquest in the Middle Eastern oil pools.

Only the biggest response can meet the need. Half-measures, the normal response of governments facing complex conflict, will not work.

And what might make such a break with automatic US policy possible? The Presidency of an unusual person chanting “change” is not enough. There are only two clusters of power in the US with enough passion about the Middle East to matter. One is Big Oil. The other is the ethnic and religious passion of American Christians, Jews, and Muslims. If sizeable parts of these groups could work together for such a policy, it might be possible.

For many Jews and Muslims, that is even harder now than it was two weeks ago. But for others, perhaps the shock of so much blood can make it possible.