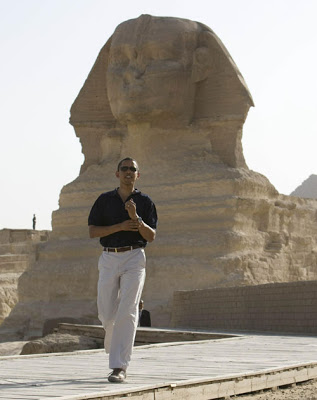 President Barack Obama walks in front of the Sphinx in Giza yesterday. He toured the pyramics after delivering his groundbreaking speech in Cairo. Photo from Gulf Times.

Salaam aleikum, shalom aleichem, peace be with you!

The President’s opening to the Muslim world was magnificent.

In regard to the need for a peace agreement between Israel and an independent Palestine, I wish it had named more clearly and specifically the U.S. insistence on a settlement freeze and reversal, an end to the blockade of civilian goods from entering Gaza, and an end to encroachment on Palestinian neighborhoods in East Jerusalem.

These were encoded in the speech, but clear and public language — as the President himself said, what diplomats say in private we must all now say in public — is necessary to build a public up-swell of commitment to this effort. Which is greater, speech or action? Speech — if it leads to action.

Even more important, from the grass-roots of America, Jews, Christians, and Muslims need to come together, sharing the same platforms and pulpits, to say the words of peace and do the acts of peace with each other. The medium is the message.

On the Shalom Center website you will find an essay laying out the basic values beneath a spiritually rooted peace policy for the Middle East. It begins

That life is interwoven, that all communities and life-forms can be valued organs within the body of life, each organ different from the others as the heart and liver and brain differ while all are parts of a sacred whole.

That self-restraint by each center of power — not negating its own value but not domineering over others — is crucial.

And then continues with the spiritual values of a life-giving Judaism that lead to specific policy actions.

I invite you to read it here.

And then to call together speakers and teachers and clergy and lobbyists and women — especially women, there must be women in this process — to lead the discussion, the retreats, the classes, the vigils, the visits to Congress, the prayers — above all the prayers, prayers like Rabbi Heschel marching, saying his legs were praying — for a peace and a community like the one the President envisioned.

And to remember — this moment would not have been possible without the work we and you have done — we and you the members and readers and friends of The Shalom Center — and the next crucial steps will also be impossible without us.

[Rabbi Arthur Waskow, a regular contributor to The Rag Blog, is director of The Shalom Center. Rabbi Waskow is co-author of The Tent of Abraham, author of Godwrestling — Round 2, Down-to-Earth Judaism, and a dozen other books on Jewish thought and practice, as well as books on U.S. public policy.]