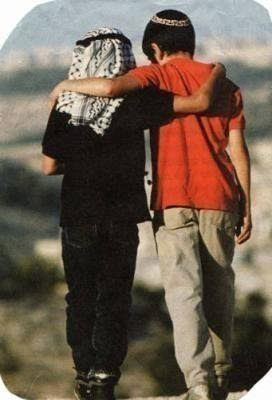 Image from Peace World Journal.
Don’t let your friends drive drunk:
U.S. must do more than wring its hands

Thomas Friedman, columnist for the New York Times and a stodgy middle-of-the-roader, says that the Israeli government has become a drunk driver, addicted to swallowing up more and more territory at the cost of any decent peace with Palestine.

The Torah did not know about “drunken drivers.” But it did know that some people might thirst to swallow up their neighbors’ land and houses: “Cursed be he who moves back his neighbor’s territory-marker. And all the people shall say, ‘Amen!’ ” (Deut 27: 17)

And of course it knew the most profound alternative to that kind of greed: “When a stranger lives with you in your land, you shall not wrong him… He shall be to you as one of your citizens. You shall love him as yourself, for you were strangers in the Land of Narrows. I YHWH, the Breath of Life, am your God.” (Lev. 19:27)

Until now, U.S. governments have firmly opposed only those Palestinians who have been addicted to violence, but not an Israeli government addicted to land-grabs and to wronging their neighbors.

It seems that the Obama administration may at last be ready to confront the drunk drivers in the Israeli government as well as the violence-addicts among some Palestinian leaders. May be.

What we — the American people — do is crucial. The White House will back down if it sees little public support. It might stay firm if it hears public acclaim.

Friends, it is said, don’t let their friends drive drunk. Will you back up a decision by the White House to stop drunk driving by our friends?

If you will, The Shalom Center has prepared a model letter to senators, urging them to support firm action for peace. You can add your own words and sign it by clicking here.

The basic issue is simple:

Now back to the drunk driver. So far all the U.S. government has done is wring its hands about the deadly results of the drunk driving. What could the U.S. do?

If you have been paying about three billion dollars a year for your friend’s gasoline AND his alcohol and you decide that his drunk driving is endangering your own life and the lives of many many people who live in your city, maybe you just cancel the credit card you gave him, and let him start going to Alcoholics Anonymous meetings until he gets his head screwed on right.

Now what does it mean to cut off the credit card for gasoline and alcohol, while making sure nobody takes advantage of your friend while he’s going through rehab?

In 2002 and again in 2007, the Arab League proposed a regional peace treaty that would give Israel peace and security with all Arab states, in exchange for the Israeli recognition of a new Palestine on approximately the 1967 boundaries. The Arab League proposal included unclear references to the rights of Palestinian refugees, but also made clear that the package could be negotiated. The Israeli government, with the approval of the Bush Administration, ignored the proposal. Now the Obama Administration seems (see above) to be moving toward supporting it.

Only the U.S. government has the power and influence to work with the Arab League and its proposal for a regional peace treaty; with the Palestinian leadership, including those elements of Hamas that have said that if the Palestinian people vote for a two-state solution, they will accept it; and above all with the government of Israel, whose military policy depends on U.S. military aid.

That aid amounts to at least three billion dollars a year. Imagine the U.S. saying that it will put its aid in escrow, dollar for dollar for the cost of the Israeli occupation of the West Bank, Gaza, and East Jerusalem. The U.S. announces that the money will be made available only to pay the costs of resettling the 400,000 Israelis who are now living in Palestinian land beyond the 1967 borders, and will be paid in one-fifth sums when (a) the blockade of civilian goods from entering Gaza is restricted to preventing only actual weapons from being imported into Gaza; and (b) chunks of 100,000 settlers at a time have left the West Bank and returned to Israel proper.

Meanwhile, the U.S. should be offering aid to a nascent Palestine on condition that leaders from at least some of Hamas and Fatah join in a government of national unity, take vigorous steps to prevent attacks on Israel, and agree to take part in a regional peace conference with the goal of achieving peace with Israel within approximately the 1967 boundaries.

This is a policy to protect and affirm the real Israel, while ending its government’s addiction to wronging its neighbors.

Can we build public support in the U.S. for this policy?

As I have written before, I think that depends on whether local and national coalitions can be built of Jews, Christians, and Muslims to that purpose.

And please consider the possibility of inviting rabbis, ministers, priests, and imams where you live to meet quietly to discuss what they can and cannot agree to do for peace, either together or individually, publicly or privately. Their conversation might be eased if they read together some writing from the Abrahamic communities (e.g. The Tent of Abraham from Beacon) and used it as a framework for conversation.

Ask them to listen to each other first as they say what their sense of God’s will and desire is for the Middle East and for American efforts to help achieve peace there. Of course this requires care for each others’ hopes and compassion for each others’ pain. So after each person speaks, hold silence for a full minute to share the Breath of Life. If these conversations help people move forward, try to arrange meetings with your Congressperson or Senator.

Blessings that you be able to take some firm and gentle steps toward making peace for the families of Abraham, Hagar, & Sarah.