Rabbi Arthur Waskow to the Senate : We Need Cloture 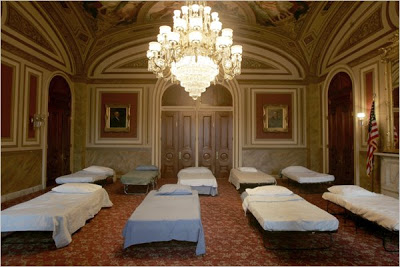 Sometimes cots have been set up at the Senate during filibusters. Photo by Stephen Crowley / NYT.

I am wondering whether it would make sense to aim for a national campaign to reduce the number of Senators necessary to call cloture from 60 to 55, or 51.

The question arises from what happened to the Recovery Act in the Senate. I think Paul Krugman is right, and we are standing on the brink of an economic disaster that will destroy our economy and with it the Obama Administration and every possibility of progressive change.

Many if not all of the anti-cloture Republicans know this perfectly well, and are seeking it. Like Limbaugh, they want Obama to fail. They think that their own insular constituencies, now that they have lost “moderate” districts and states, will stick with them, and they will not lose in 2010. (In fact, it will be a lot harder to make Democratic gains in the Senate in 2010, because the one third class of Senators up for reelection then are more slanted to Democrats than the class of ‘06 or ‘08. There are fewer Republicans to defeat.)

The conservatives expect that Obama’s failure would put the country back under their control. What they may or may not have taken into account is that if a liberal Presidency and Congress cannot deal with this crisis, we know from the ‘30s there is likely to be a furious upwelling of not conservative but ultra-right-wing energy. (Remember that in the Great Depression, it was a conservative administration — Hoover —that failed. Turning leftward made sense. But if a liberal administration fails?)

Progressive/liberal responses to the only half-success of the final Recovery Act has taken two basic tacks: (1) Obama screwed up by trying for bipartisanship too hard and long [Krugman]; (2) Obama had no choice because there weren’t 60 votes in the Senate, and he pulled off the best possible result [Herbert]. But what if they’re both right — Obama did the best he could, and it isn’t good enough to save him or the country — and the real problem is that the Senate rules are heavily skewed toward giving a conservative minority a veto, on top of the minority rule that is built into the two-senators-per-state structure?

And this goes beyond the Recovery Act. What will happen to health care, capping CO2, another Recovery Act, etc? It seems likely that any attempt to deal with the major issues we face will fail unless the filibuster is taken out of play.

Certainly a national campaign would be necessary; the Senate will not take this step on its own. The Senate rules, of course, make it hard. According to a review of them by the Congressional Reference Service of the Library of Congress, this is the situation:

The Senate sees itself as a “standing body” because two thirds of its membership are always incumbents. Therefore the standing body always has a set of standing rules, unlike the House of Reps, which adopts new rules at the beginning of each new congress. The standing rules of the standing body say that it does take a super-majority to amend the rules (and thus to reduce cloture to 55 or 51 votes).

BUT — there is a long-standing and unresolved argument that when the Constitution says “the Senate” makes its rules, that means a majority of the Senate is free to do so. Just four years ago the GOP was threatening to do that by majority vote, about confirming judicial nominations — it’s what people then called the “nuclear option” — and they were certainly saying it was legal. But the Senate has never, even when VP Mondale ruled that it could, accepted the proposition and changed the rules by majority vote.

So it’s rough. But — if we don’t do this, what do you think is going to happen to health insurance, to cap-and-trade, to any more than marginal reform? The question is whether there is energy in the country to raise enough hell to make the Senate change — maybe demanding majority vote will make them go to 55? Is there more energy for this than for, let’s say, a decent healthcare bill? Is it just inside baseball? Could it break loose if the filibuster threat damages enough bills that people care about?

“Bring democracy to the Senate!” Could it work, or does it make more sense to focus on the bread-and-butter issues like healthcare?

For background, see How the Filibuster Became the Rule by David Herszenhorn / The New York Times / Dec. 2, 2007

This entry was posted in Rag Bloggers and tagged Congress, Filibusters, U.S. Senate. Bookmark the permalink.