Rachel Maddow and the Irresistible Rise of Sarcastic News 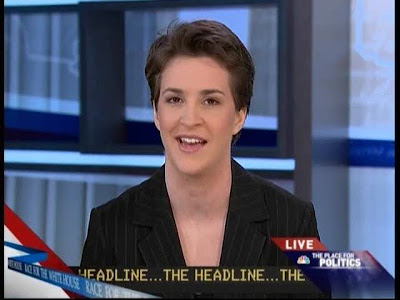 For Rachel Maddow and the other ironic anchors, absurdity is serious stuff

What has caused sarcastic news to flower? For starters, today’s bloggers and YouTube snidesters see parody as information and information as parody.

[The following article appears in the March/April, 2009 issue of the Columbia Journalism Review.]

On a Wednesday night in December, Rachel Maddow, in a toreador-style black jacket, waits for her show to start. She types last-minute notes on her computer with the intensity of a graduate student. At the 30 Rock news television studio, with its red, white, and blue décor, late-night assistants running about, and two dozen television screens on all around her, Maddow seems in her element. And when the show begins, perhaps unsurprisingly, it is devoted to “Blago”–the thoroughly and hilariously embarrassing (and now former) Illinois governor Rod Blagojevich. Maddow asks the “awkward question,” as she puts it: Is Blago not well? She riffs a bit and then concludes, with a sarcastic smile, “Illinois, you are getting almost as fun to cover as Alaska!”

MSNBC’s The Rachel Maddow Show made its debut in the fall of 2008 and by October had grabbed 1.89 million viewers, beating CNN’s Larry King Live in the over-twenty-five and under-fifty-four demographic for that whole month. Maddow’s mocking on-air demeanor reminds many people of what they liked most about college. But she’s not just clever: she’s a tough-minded Rhodes Scholar, former aids activist, and an out lesbian. Her very existence as an anchor on cable television defies a number of different common wisdoms.

That’s all remarkable unto itself. But to my mind, what really makes the show special is how it embodies the rise of what I think of as sarcasm news. More and more news programs are likely to go absurdist in the coming months and years. As faith in and loyalty to traditional anchors wither, one can even hear ironic Maddowian intonations creeping into the delivery of CNN’s not-so-funny anchor Campbell Brown on her new show.

Now, you may be thinking, Jon Stewart and Stephen Colbert perfected comedy news a while back, no? But Maddow marks a watershed for a different sort of news comedy. Stewart (and Craig Kilborn before him) was a comic first and foremost—when The Daily Show started, the news was the surprising part. Maddow’s show works the opposite way: the news is the thing and the humor is the surprise. Along with her precursor, the five-year-old Countdown With Keith Olbermann, these are two “real” news programs permeated by parody.

What has caused sarcastic news to flower? For starters, today’s bloggers and YouTube snidesters see parody as information and information as parody. This is not entirely a mistake. Now, the news-with-satire approach can seem like the only thing that makes sense, since at least these shows are in on their own jokes. Even politicians sometimes embrace the idea of themselves as caricatures. They show up on Saturday Night Live to rap, or to meet their comedy doubles. They import self-parody into their own campaigns, as in Hillary Clinton’s faux Sopranos video on YouTube.

Also, the proliferation of niche audiences spurs sophisticated and partisan humor because these smaller groups of viewers have very particular tastes, identities, and affinities. They are thus more likely to share a sense of what’s funny. Critical verbal humor is a very specific thing—one reason that American film comedies struggle for viewers overseas. Sarcastic ripostes call for sarcastic viewers who know how, and when, to laugh. Simply put, Maddow is joking to the converted.

Finally, we have a far more sophisticated audience today than in the past, one that sees more clearly behind the manipulations and stagecraft of its political leaders. Two decades ago, Reagan got away with his spin, and his spinster, Michael Deaver, was and still is considered an untainted spokesman. Karl Rove, on the other hand, is widely seen as a vile little prince of handling. Yet Deaver, if we remember, was as much a master manipulator as Rove was; he got Reagan, you’ll recall, to gin up fake remorse during the Iran-Contra affair. Both the comedy and the news coverage of our decade and decades past reflect each era’s understanding of public relations and doublespeak. Now, news parody is truly a tool with which to strike back at political PR.

Political caricatures have been an American staple since the Colonial period. In the late nineteenth century, these sorts of illustrations tended to be scathing social critiques. In the twentieth century, though, news parodies were a bit more milquetoast. This was true even thirty-three years ago, when Saturday Night Live’s “Weekend Update” kicked off the modern form of news parody. Back then, of course, real anchors exuded TV’s version of gravitas and solidity. The SNL Update was just milking anchors’ self-seriousness for laughs.

In the 1990s and 2000s, this satirical mode built up a head of laughing gas with The Daily Show With Jon Stewart, Stephen Colbert, and Air America’s Al Franken. Comic news has become so popular that it even saved the career of a louche pothead named Bill Maher, who in a few short years went from comic outlier to éminence gris.

According to Bill Wolff, executive producer of The Rachel Maddow Show and vice president of msnbc’s primetime programming, nothing less than George W. Bush has paved the way for his programs, as well as the others. “The funnier side of the political spectrum is the one where your enemies are most ridiculous,” says Wolff.

Maybe, but I think it has more to do with a shift in how people like information conveyed. Bush perhaps accelerated the process. So many felt degraded by the Bush era that they wished to degrade him back, on television. And then there are liberals who are now recalling their long-forgotten weapon: wit. As Jackson Lears, a professor of American history at Rutgers University, says of Maddow and the rest, “After decades of being mocked for excessive earnestness, the Left is remembering what the [1960s] counterculture knew: flagrant lies demand absurdist responses; they deserve to be not merely refuted but laughed to scorn.”

Still, MSNBC’s Wolff admits his network has gone in this direction partly due to the success of its rival network, Fox. A decade ago, Fox was established and MSNBC was just starting to brand itself as a distinct network. After Olbermann’s show became a hit, one might hypothesize that msnbc thought it could go for broke by doubling down on Maddow.

Wolff ties the rise of Maddow and Olbermann to their ability to bring analysis to news audiences. “With information becoming cheap, the success of Rachel and Keith is because people want someone collating or commenting on information,” says Wolff.

A lot of Maddow’s success derives from her taste for the absurd. At one point during the night of my visit, I watched from the sidelines as she showed a Christmas ad made by the coal industry, starring pieces of coal with bulging eyes and green and red carol books. “Anthropomorphic lumps of carbon singing,” Maddow hooted. Three cameras swung around her, using the in-your-face-and-out-of-our-minds technique so beloved by Olbermann. She then went further into the comedy ether: “The earth’s rotation is slowing down . . . that’s fodder for your next existential crisis.”

Throughout her show, Maddow’s bookishness comes through her wit. Early in the fall, she had a field day with Sarah Palin’s penchant for falsehoods, but in a very particular way. On one show around the election, she called Palin “a prevaricating, mendacious truth-stretcher or whatever other thesaurus words we can come up with for lying, is just far less efficient than calling a lie a lie, and a liar a liar.” I realized that in order to find this fully funny, you had to like jokes about abusing the thesaurus.

In October, Maddow’s wit became the accidental subject of one of her shows: a tormented-looking David Frum complained on-air that her humor was juvenile. “Making jokes about it is part of the way that I am talking about it,” Maddow fired back. “I don’t necessarily agree with you on ‘grown up.’ I think there’s room for all sorts of different kinds of discourse, including satire, including teasing, including humor. There’s a lot of different ways to talk about stuff, and Americans absorb information in a lot of different ways.”

It was a standoff between a conservative who knew that his party had lost its sense of humor and an anchor utterly assured that satire was the transom for getting political information—and critique—to her audience.

I talked with Maddow after her show about her absurdist approach. “When Frum said I talked about things in an immature way, I am cool with that,” she said, as she gleefully removed her pancake makeup (which she appeared to despise). She then told me how she first found her ironic humor, in college, when she crashed an event called Conservative Coming Out Day, stole the group’s sign, and changed it to Sexually Frustrated Conservative Mud Wrestling Day. After graduation, she had more prosaic practice in comedy: her early jobs in commercial radio included writing a hot-tub-company jingle and dressing as an inflatable calculator.

Still standing in the show’s mirrored makeup room, she donned her signature horn rim glasses and said, “I realized I didn’t have to be afraid to be smart, and the audience can be there with me.”

Maddow, like so many others in the Obama age, is moving the mainstream in her semi-subversive direction. But before progressives pop open Prosecco, celebrating how they’ve finally taken over not only the White House and the Senate but also cable news with comedy, let’s pause to consider these shows’ future. Olbermann and Maddow’s audiences combined aren’t as big as Brian Williams’s, and their market share fell off along with everybody else’s after the election. Will the clever-comedy-news trend last? I think yes, mostly because I don’t believe that Obama is so radiant that he will defy parody, or that Bush and Palin alone created our taste for irony-laced news. Also, the Republicans, and their nutsy pundits, are not going away.

There are those who fret about whether news humor simply co-opts political life, acting as an escape valve that lets our civic energy dissipate. I agree with them that news satire like Saturday Night Live’s can serve as this kind of vent, ameliorating outrage with a laugh. But Maddow’s wit—and more obviously, Olbermann’s—is too pointed to just act as a kind of political-anger-management regimen.

As for those critics who fear that Maddow and Olbermann and the others have replaced thoughtful newsgathering with snickering, I can see their point. But I think they don’t need to worry so much. As I watched Maddow do her show in the studio that winter day, she struck me as a relatively trustworthy source for news.

She may look Chaplinesque, with her dark cap of hair and expressive black eyebrows set against pale skin, but her humor is, actually, pretty serious stuff. In fact, her take on the news is so gravely absurd it often makes the news seem even darker than it is. By calling attention to the malevolence and dishonesty around us, Maddow and the new ironic anchors have come up with one way to shake us out of our exhausted acceptance of it all.