Rachel Papo : Face of the Day 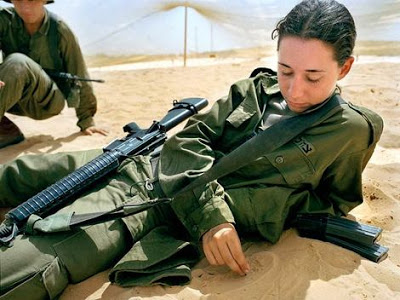 See Rachel Papo’s statement about this series below.

At an age when social, sexual, and educational explorations are at their highest point, the life of an eighteen-year-old Israeli girl is interrupted. She is plucked from her home surroundings and placed in a rigorous institution where her individuality is temporarily forced aside in the name of nationalism. During the next two years, immersed in a regimented and masculine environment, she will be transformed from a girl to a woman, within the framework of an army that is engaged in daily war and conflict.

Almost fifteen years after my mandatory military duty ended, I went back to several Israeli army bases, using the medium of photography as a vehicle to re-enter this world. Serial No. 3817131 represents my effort to come to terms with the experiences of being a soldier from the perspective of an adult. My service had been a period of utter loneliness, mixed with apathy and pensiveness, and at the time I was too young to understand it all. Through the camera’s lens, I tried to reconstruct facets of my military life, hopeful to reconcile matters that had been left unresolved.

Walking onto an army base after all these years was very disorienting, as memories began to surface, and blend with feelings of estrangement. The girls who I encountered during these visits were disconnected from the outside world, completely absorbed in their paradoxical reality. They spoke a language now foreign to me, using phrases like “Armored Cavalry Regiment” and “Defense Artillery.” Would it have made any difference to explain to them that in a few years the only thing they might remember is their serial number? Photographing these soldiers, I saw my reflection; I was on the other side of a pane of glass—observing a world that I had once been a part of, yet I could not go back in time or change anything. It felt like a dream.

The photographs in this project serve as a bridge between past and present—a combination of my own recollections and the experiences of the girls who I observed. Each image embodies traces of things that I recognize, illuminating fragments of my history, striking emotional cords that resonate within me. In some way, each is a self-portrait, depicting a young woman caught in transient moments of introspection and uncertainty, trying to make sense of a challenging daily routine. In striving to maintain her gentleness and femininity, the soldier seems to be questioning her own identity, embracing the fact that two years of her youth will be spent in a wistful compromise.

This entry was posted in RagBlog and tagged Israel, Military, Photographers, Photography, Women. Bookmark the permalink.