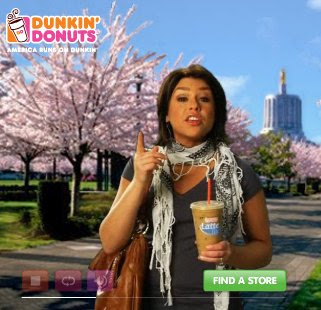 Global doughnut franchiser Dunkin’ Donuts has removed from broadcast an ad featuring television chef Rachel Ray because Right-wing extremist Fox News commentator Michelle Malkin claimed that, in the ad, Ray was wearing a scarf called a keffiyeh, which is traditionally worn by Arab men. Malkin described this head wrapping as having been “…popularized by Yasser Arafat and a regular adornment of Muslim terrorists appearing in beheading and hostage-taking videos.”

Of Ray’s offending accessory, Dunkin’ Donuts said, “…the scarf had a paisley design… selected by a stylist for the advertising shoot,” and went on to blubber, “Absolutely no symbolism was intended.”

Gleeful that her latest exercise in bullying had caused a corporation to capitulate, Malkin followed up her original commentary of last week on the matter with praise for the company: “It’s refreshing to see an American company show sensitivity to the concerns of Americans opposed to Islamic jihad and its apologists.” 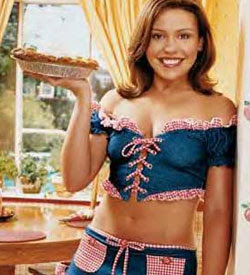 Ms. Malkin and her fellow apologists made no mention of the fact that none other than Meghan McCain, daughter of putative GOP presidential nominee John McCain, has been photographed publicly wearing a nearly identical scarf. So, too, have American and British soldiers stationed in the Middle East; in fact under the name “shemagh,” the traditional headdress is so common as an Anglo-American armed forces apparel option that it is sold online as military gear and described as being “…worn by U.S. and British Special Ops. forces in Afghanistan and Iraq.”

Now, many readers righteously indignant over this whole incident are wondering what can be done. As far as Malkin is concerned, the answer is simple: “absolutely nothing.” As frustrating as that is, long ago the choices were made to let a much wider range of personalities be considered within the scope of “normalcy.” The extremists of the 21st Century are nothing other than the blowback from a previous era of liberalism and its obsession with intellectual tolerance that extended all the way to anti-intellectualism. In gratitude, the practitioners of orgiastic ignorance have issued forth a tsunami of intimidation to wash away that same liberal society which allowed them the freedom to coälesce with their own kind in the open and become a rolling mob running amok to shatter the glass windows of the market of clear, thoughtful, and reasoned ideas.

On the level of the commentators, themselves, let it go: that war is over and lost.

More broadly, never try to change the whole world when more can be accomplished by making the willfully miserable within it even more so.

As far as the craven media outlets, schools, public figures, and corporations that allow themselves to be bullied into submission by the madness of our age, it is their fate that they find no harbor of quiet by doing what the Right demands of them.

Change something deserving of aggravation; and to do that, first, politely ask for its attention.

If that doesn’t work, scream in its bloody ear.

If it is blind, fart at it.

If its own smell has made it insensible, find its testicles. With corporations, they are called “sales revenue.”

If you are dealing with a corporation that has $5.3 billion in global sales revenue, as Dunkin’ Donuts does, your personal boycott is going to fail, but your personal quest might not.

In the case of the latest sniveling company that has caved to bizarre allegations, the good news about certain failure in effectively punishing the craven is two-fold: first, you will have the pleasure of annoying the rich, cowardly, well-dressed executives who run the firm; and, second, by not purchasing Dunkin’ Donuts products, you might find out about small bakeries right in your area that not only sell much better doughnuts, but also know how to spell the word for their product.

The Dark Wraith reaches for the éclairs.