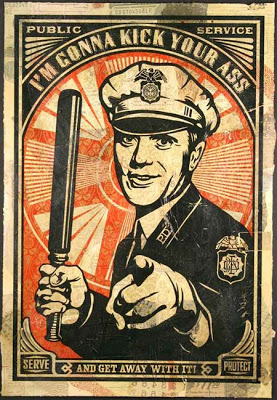 Not far from Jena, La., suspicions of a cover-up mount

What happened in the 39 minutes in between — during which Pikes was handcuffed by local police and shocked nine times with a Taser, while reportedly pleading for mercy —is now spawning fears of a political coverup in this backwoods Louisiana lumber town infamous for backroom dealings.

Even more ominously, because Pikes was black and the officer who repeatedly Tasered him is white, racial tensions over the case are mounting in a place that’s just 40 miles from Jena, La.—site of the racially explosive prosecution of six black teenagers charged with beating a white youth that last year triggered one of the largest American civil rights demonstrations in decades. And in a bizarre coincidence, Pikes turns out to have been a first cousin of Mychal Bell, the lead defendant in the Jena 6 case.

No novelist could have invented Winnfield, a place so steeped in corruption that they built a local museum to try to sanitize it all.

Here in the birthplace of two of Louisiana’s most colorful and notorious governors — Huey and Earl Long—the police chief committed suicide three years ago after losing a close election marred by allegations of fraud and vote-buying.

Four months later, the district attorney killed himself after allegedly skimming $200,000 from his office budget and extorting payments from criminal defendants to make their cases go away.

The current police chief is a convicted drug offender who got a pardon from Edwin Edwards, the former Louisiana governor who is serving time in federal prison for corruption convictions.

All of that tangled history is now wrapped up in the Pikes case, because Scott Nugent, the officer who Tasered him, is the well-connected son of the former police chief who killed himself—and the protege of the current chief, who hired him onto the force.

“A lot happens in this town, and it just gets swept under the rug,” said Kayshon Collins, Pikes’ stepmother, who has participated in several local protests over the case. “What the police did to Scooter just isn’t right. They would never have Tasered a white kid like that.”

The official police version of what happened to Pikes on that brisk January afternoon reads like a sad but familiar story in Winnfield’s local newspaper.

Nugent spotted Pikes walking along the street and attempted to arrest him on an outstanding warrant for drug possession, according to Police Chief Johnny Ray Carpenter. Pikes took off running, but another officer cornered him outside a nearby grocery store. Pikes resisted arrest and Nugent subdued him with a shock from a Taser.

Then on the way to the police station, Carpenter told the newspaper, Pikes fell ill and told the officers he suffered from asthma and was high on crack cocaine and PCP. The officers called for an ambulance, but Pikes later died at the hospital.

Six months later, the Winnfield police are standing by that story. Meanwhile, the Louisiana State Police are investigating the case, and no charges have been filed against Nugent or two other Winnfield police officers who assisted him in arresting Pikes, although the City Council did decide to fire Nugent from the force in May.

Winn Parish District Atty. Chris Nevils says he expects to present the case to a grand jury after he receives the results of the state police investigation.

But there is already abundant evidence contradicting the official police version of the incident.

An autopsy determined there were no drugs in Pikes’ system and that he did not have asthma, according to Dr. Randolph Williams, the Winn Parish coroner.

Moreover, Pikes did not resist arrest, and he was handcuffed while lying on the ground, according to Nugent’s police report of the incident. It was only after Pikes refused Nugent’s command to stand up that the officer applied the first Taser shock in the middle of his back, Nugent wrote.

Several more Taser shocks followed quickly, Nugent stated, because Pikes kept falling down and refusing to get back up. Grocery shoppers who witnessed the incident later told Pikes’ family that he had pleaded with Nugent: “Please, you all got me. Please don’t Tase me again.”

Williams said police records showed Nugent administered nine Taser shocks to Pikes over a 14-minute period. The last two jolts, delivered as police pulled Pikes from a patrol car at the police station, elicited no reaction because the suspect was unconscious, Williams said.

After consulting about the case with Dr. Michael Baden, a nationally prominent forensic pathologist, Williams ruled last month that Pikes’ death was a homicide. On the death certificate, he listed the cause of death as “cardiac arrest following nine 50,000-volt electroshock applications from a conductive electrical weapon.”

“God did not just call this young man home,” said Williams, who has served as parish coroner for the past 33 years. “If somebody can tell me anything else that killed this otherwise perfectly healthy young man … I’d like to know it.”

Williams is no stranger to controversy in Winnfield. Back in 2004, his garage was firebombed, and he says he’s been shot at 19 times by people upset with the independence of his investigations. He wears a gun holstered at his waist.

“This case may be the most unnecessary death I have ever had to investigate,” Williams said. “[Pikes] put up no fuss, no fighting, no physical aggression. … He just didn’t respond quickly enough to the officer’s commands.”

Nugent, 21, declined to be interviewed for this story. But his attorney, Phillip Terrell, said that Nugent acted according to his training—an opinion seconded by police spokesman Lt. Charles Curry.

Yet the official Winnfield Police Department Taser policy appears to prohibit the weapon’s use against a non-violent, handcuffed suspect.

“The Taser shall only be deployed in circumstances where it is deemed reasonably necessary to control a dangerous or violent subject,” the policy states. It also requires that a suspect who has been Tasered should immediately be checked out at a hospital.

What’s more, safety guidelines issued by Taser International Inc., the manufacturer of the device that is now used by more than 12,700 law-enforcement and military agencies worldwide, warn officers to “minimize repeated, continuous, and/or simultaneous exposures.”

Company officials, citing dozens of medical studies, insist Tasers are safe when used properly. But few of those studies examined the effect of multiple Taser applications over a short period of time. The U.S. Department of Justice, in a study released in June, concluded that “the medical risks of repeated or continuous [Taser] exposure are unknown.”

In less than two years on Winnfield’s 20-officer police force, police records show, Nugent ranked as the department’s most aggressive Taser user. Among the recipients were a 15-year-old African-American runaway who was not charged with any crime and Pikes’ father, currently serving a prison sentence for a drug offense, who was Tasered by Nugent last year, according to Kayshon Collins.

This entry was posted in RagBlog and tagged Criminal Justice, Racism. Bookmark the permalink.