Racial Profiling : What’s Up With the Mormons? 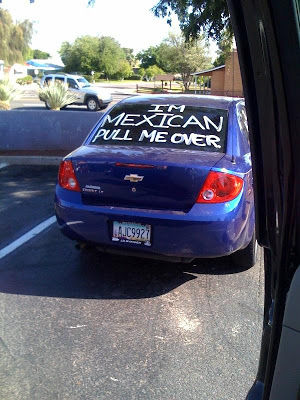 What’s up with the Mormons? Orem, Utah legislator Stephen Eric Sandstrom last week pledged to follow the lead of “my friend” Arizona State Senator Russell Pearce and expand the number of states with show-me-your-papers bills aiming to criminalize, jail, and deport irregular migrants.

Rep. Sandstrom, who is a graduate of Brigham Young University and a former Mormon missionary to Venezuela, takes credit for co-founding a state’s rights organization called the Patrick Henry Caucus.

Sandstrom’s “friend” Sen. Pearce of Arizona, sponsor of the recently signed SB-1070, hails from the Mormon stronghold of Mesa and claims to be the mastermind behind Maricopa County’s infamous Tent City Jail.

For Pearce and Sandstrom, the crucial issue of liberty in the 21st Century would appear to involve the rights of states in relation to the federal government of the USA — never mind the rights of individual people who reside in those states.

What’s curious about this particular Pearce-Sandstrom movement for state’s rights over individual rights is how it seems to contradict the interests of the Mormon family itself, which has been witnessing an increase in Spanish-speaking congregations.

“Other than for its missionaries, the LDS Church takes a ‘don’t ask, don’t tell’ approach toward the immigration status of its members,” reported Fletcher Stack. “But some estimate between 50 percent and 75 percent of members in Utah’s 104 Spanish-speaking congregations are undocumented. That includes many bishops, branch presidents, even stake presidents.”

“I can only speak from my own LDS experience here, but I hold Utah lawmakers responsible for breaking up good LDS families and forcing young American citizens out of their native land,” wrote Johnston, predicting that victory would not reward the shortsighted anti-migrant forces.

“I could see these Hispanic brethren were going to win,” wrote Johnston. “I could see their faith, resilience and strength. They wanted to be in Utah more than Utah lawmakers wanted them out. They had weathered tribulations with good humor and without malice toward those who persecuted them.”

Meanwhile, in the Mormon stronghold of Mesa, Arizona, represented by SB-1070 sponsor Sen. Pearce, the number of Spanish-speaking LDS congregations had grown from five to 13 between 2002 and 2007 according to East Valley Tribune reporter Sarah N. Lynch.

“It is one of the most significant scripture projects ever undertaken by the Church,” proclaimed a notice of Sept. 14, 2009, posted at lds.org. “The volume contains new chapter headings, footnotes and cross-references to all scriptures used by The Church of Jesus Christ of Latter-day Saints.” Announcement of the volume was reportedly shared among “thousands of Spanish-speaking Latter-day Saints congregations.”

Mormon political leaders, like everyone else in today’s global economy, are confronting a real crisis in human welfare. Maricopa County in particular is a frontline disaster zone for the crisis in real estate values, mortgage defaults, unemployment, and revenue shortfalls.

“In Maricopa,” according to an April report from the Bureau of Labor Statistics on Q3 2009 unemployment, “every private industry group except education and health services experienced an employment decline, with construction experiencing the largest decline (-32.2 percent).”

Crisis reveals character. So when Mormon political leaders campaign for agendas of states’ rights according to Patrick Henry rhetorics of “liberty or death,” perhaps their Spanish-speaking LDS brethren can remind them that there are millions of people of goodwill in need of actual freedom-loving legislators in whatever state they have freely chosen to congregate and build up.

4 Responses to Racial Profiling : What’s Up With the Mormons?