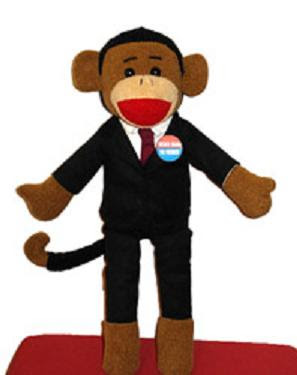 A stuffed sock monkey doll dressed as and named after presidential candidate Barack Obama may not be shelved just yet, despite cries of racism from around the country.

David and Elizabeth Lawson, the doll’s creators who live in West Jordan, released a lengthy statement, ending with the sentiment “We hope to meet again soon in a new venue.”

Apparently that new venue is http://sockpoliticians.com. The Web site has the same doll, description and format as the Lawsons’ previous site.

The statement said the mass production of the doll, and the upcoming Sen. John McCain take – JohnnieMcSock – are canceled. However, that comes because Binkley Toys Inc., the Canadian company originally hired to mass produce the doll, pulled out after receiving multiple e-mails pointing out the racist nature of the doll. Binkley owner Rob Bishop – who is not related to Utah Rep. Rob Bishop – called his choice to make a prototype “naive,” but apologized and refused to make the doll.

While West Jordan’s The Sock Obama is issuing refunds to those who had pre-ordered the doll from the United States, Canada, United Kingdom and Australia, the company hopes to find a new manufacturer for their doll.

The Lawsons called the outcry of racism a hypocritical double standard as “thousands of Google sites” contain depictions of President Bush as a chimpanzee.

“In the good ol’ fashion spirit of entrepreneurialism, free enterprise has been censored, and TheSockObama politically plush toy has been discriminated against in the marketplace of the United States of America,” the statement read.

The Lawsons’ statement also said the creators of the puppet are not members of The Church of Jesus Christ of Latter-day Saints, and asked people to “kindly refrain from unkind remarks about our neighbors and friends of the Mormon faith whom we love and hold dear.”

The Lawsons pointed to “the blogging dens of resistance” that have flooded them with e-mails in protest.

“Last we heard, a posse of bloggers from back East are on their way over to conduct – how did they phrase it? – a good ol’ fashioned KKK house burning party at David and Elizabeth’s. Kinda exciting stuff, but this in America?” it stated.

The desire to continue to manufacture the doll is a shift from the Lawsons’ original statement that they did not realize that depicting a black man as a monkey would carry any implications of racism.

That the company is considering pushing ahead with the manufacturing of the doll astounds Charles Henderson, a black Kearns Democrat running for a seat in Utah’s House of Representatives.

“After you’ve been told it’s not acceptable, why do you pursue this unless it’s motivated by financial gain, notoriety or some other more malicious path that you’re trying to take?” Henderson said. “I don’t see a reason why they would go down that path. It’s not acceptable. I hope no one buys it.”

Henderson also wonders who the Lawsons are targeting as their audience after hearing from people such as Jeanetta Williams, president of the local chapter of the National Association for the Advancement of Colored People, who calls the doll “pure racism at its extreme.”