Rafah Crossing: Let the Doctors Through ! 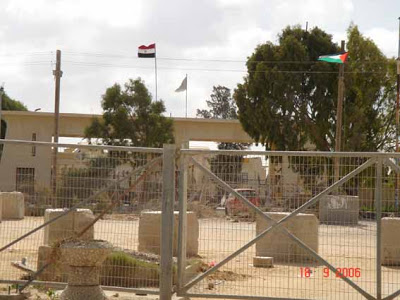 Rafah, Egypt — Dr. Nicolas Doussis-Rassias and many other volunteer doctors have been waiting in Rafah, Egypt for days. Nicolas and the other physicians came to Rafah to go through the border into Gaza to help the 3000 people wounded by Israeli bombs and heavy weapons.

Rafah is a heavily armed Egyptian border crossing into Gaza, a four hour drive away from Cairo. Sonic booms of high flying jets cut through the stark blue sky. Military drones hover over the border as the air smells of burning.

“Three thousand victims of bombs and gunfire would overwhelm the medical system of New York city,” Nicolas said. “Gaza now has no functioning medical system at all. Most of it has no electricity nor running water. These people are in crisis – they need medical help, so we are here to help them.”

But today, instead of helping the thousands of wounded, Nicolas and other doctors are holding up a hand lettered red and blue banner outside the Egyptian border station saying – Let the Doctors Through!

Why? Doctors of Peace and numerous other doctors from around the world have been prevented from entering Gaza for seven days. They cannot get in to help through Israel nor Egypt.

Nicolas is not an anti-Israeli radical. He is a jolly 49 year old Athens doctor. Father of two children, he is the president of a organization of volunteer Greek physicians called Doctors of Peace. These doctors pay their own way and volunteer to help the victims of war and natural disasters. They have helped out in Latin America with victims of Hurricane Mitch, in Sri Lanka with tsunami victims, and the victims of wars in Lebanon, Serbia, Turkey, and Pakistan.

But the borders of Gaza are sealed off preventing basic humanitarian and medical assistance from entering.

Richard Falk, the UN Special Reporter on Human Rights in the Occupied Territories, pointed out the human rights violations of the sealed border: “Israeli actions, specifically the complete sealing off of entry and exit to and from the Gaza Strip, have led to severe shortages of medicine and fuel (as well as food), resulting in the inability of ambulances to respond to the injured, the inability of hospitals to adequately provide medicine or necessary equipment for the injured, and the inability of Gaza’s besieged doctors and other medical workers to sufficiently treat the victims.”

The people of Gaza have been cutoff from basic medical and humanitarian resources for a long time by an ongoing blockade by Israel, but everything is much worse in the last few weeks.

Falk, like many others, also condemned the rocket attacks launched from Gaza against Israel. More than a dozen Israelis have died since the war began, as have more than 800 Gazans. But Falk’s harshest words were reserved for the catastrophic human toll from the Israeli airstrikes and “those counties that have been and remain complicit, either directly or indirectly, in Israel’s violations of international law.”

Frida Berrigan pointed out that “During the Bush administration Israel has received over $21 billion in U.S. security assistance, including $19 billion in direct military aid. The bulk of Israel’s current arsenal is composed of equipment supplied under U.S. assistance programs. For example, Israel has 226 U.S.-supplied F-16 fighter and attack jets, over 700 M-60 tanks, 6,000 armored personnel carriers, and scores of transport planes, attack helicopters, utility and training aircraft, bombs, and tactical missiles of all kinds.”

Palestinian medical officials say more than half of the 800 dead and 3000 wounded are civilians. Denial of humanitarian and medical assistance to civilian casualties is a clear violation of basic human rights.

The people of Egypt are challenging the denial of medical help for Gaza. Halfway through our drive from Cairo to Rafah, we saw a hundred young Egyptians sitting in the middle of the highway protesting Egypt’s inaction.

Doctors of Peace were still not allowed in today. Some physicians, tired from the seven day blockade, have started to return home.

Nicolas is going back to the Rafah border crossing tomorrow to try again. Why? “Because there are 3000 injured people who need help. I am going to keep trying.”

[Bill Quigley is a human rights lawyer and law professor at Loyola New Orleans. He is in Egypt as a human rights representative of the National Lawyers Guild, the Society of American Law Professors, the International Association of Democratic Lawyers and the War Resisters League. Kathy Kelly of Voices for Creative Nonviolence and Audrey Stewart are also in Egypt and contributed to this article. His email is quigley77@gmail.com.]