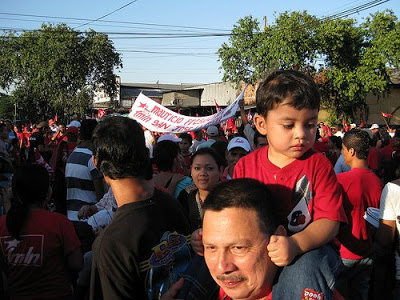 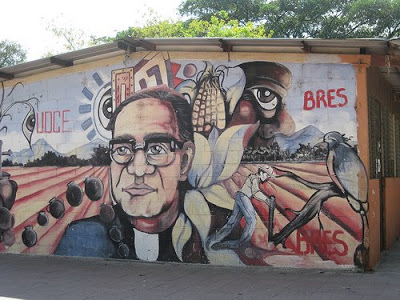 Photos from the elections in El Salvador by Al / The Rag Blog.
Live from El Salvador

One team in San Martin actually was notified that an ARENA representative in a dark corner (pants down) was trying to smuggle out Actas and ballots… An FMLN activist had seen him struggling with his belt and made sure to help, revealing the envelopes he had stuffed in his pants.

[This is the third in a series of dispatches from a regular Rag Blog contributor who is writing under a pseudonym due to the sensitivity of the situation in El Salvador.]

I was in the small dusty town of Rosario de Moro where there were sixteen voting tables. Our group left our hotel in San Salvador and got to the voting site by 4:30 a.m. It was in a small school with a covered basketball court which meant that we were in the shade. The FMLN had an office across the street and they had mobilized and were ready for their work.

Each table had four official people sitting at it — two from the ARENA party and two from the Frente Faribundo Marti for National Liberation (FMLN). Then there were vigilantes (observers) in party vests — two for each party. Red vests for the FLMN and red white and blue for ARENA. We met two of the police officers and entered the site promptly at 5. Four international observers determined to stay the entire day until the Actas (final reports) were faxed and the papaletas (ballots) had been loaded onto trucks and taken into the Capitol by the police.

I’ll jump ahead now because for all the lack of technology, the votes got counted quickly with a lot of transparency. Each ballot shown to everyone at the table and put into the hands of a Party representative. There were checks and balances as each roster (padron) was counted and the corners torn off the ballots. Unused ballots were counted and stamped. We watched as the Actas (table results) were faxed to San Salvador, checking to make sure the verbal results we had gotten at each table had not been replaced.

This is why we were there to guard against fraud — against the 800 bused in Guatemalans and Nicaraguans, against the replacement of Actas and stolen ballots. DUI (ID cards) for dead people and bought votes.

There is much more to say.

But Mauricio Funes won the presidency and it was known by 6 p.m. (after the polls closed at 5) at my election site. The vice president is Salvador Sanchez Cerena, a former guerrillera in the struggle here. Everyone that speaks of this election says it is dedicated to the dead. To Oscar Romero assassinated as he gave mass in March, 1980. And to the people massacred.

It is a huge turning point. The 1992 UN brokered peace accords here resulted in an end to the civil war, but it has been the relentless organizing of the FLMN in every sector that has resulted in a people’s victory. The streets were filled with red shirts and red FLMN banners. Fireworks lit the sky. The man overseeing the polling place said to me: “Sometimes a party celebrates. This time the people celebrate.”