Rag Radio : Bill Kirchen is ‘Titan of the Telecaster’ 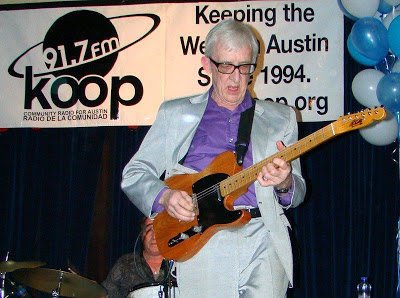 Grammy nominated guitarist, singer, and songwriter Bill Kirchen was named a “Titan of the Telecaster” by Guitar Player Magazine and The Washington Post’s Mike Joyce said, “The folks who make Fender Telecasters ought to stop what they’re doing and cut Bill Kirchen a fat check.”

Kirchen, who is now based in Austin and tours internationally, headlined a rousing benefit for community radio station KOOP at Antone’s nightclub in Austin on Saturday, February 4, playing to a packed and enthusiastic crowd. Bill Kirchen was also Thorne Dreyer’s guest on Rag Radio, Friday, February 17, 2012. He discussed his historic and colorful career and sang four songs, backing himself on the acoustic guitar. The interview can be heard here:

Bill Kirchen’s career has spanned more than 40 years during which time he has worked with an all-star cast, including Nick Lowe, Emmylou Harris, Doug Sahm, and Elvis Costello. His work has incorporated rock ‘n’ roll and country music, drawing on blues and bluegrass, Western swing from Texas, and California honky-tonk.

Kirchner started playing the banjo “during the great folk scare of the Sixties,” but soon turned to the acoustic guitar, “fingerpicking to Mississippi John Hurt.” I wanted to play acoustic blues,” he told the Rag Radio audience, “but got seduced by the electric guitar.” He played one Telecaster guitar for 40 years, “until I wore it down to the nub.”

He liked the Telecaster “because it’s real simple. It’s a slab on a stick, with two pickups, two knobs, one switch. It couldn’t be simpler.” But it was one of the original styles of electric guitar, and the one most of his favorite players used. “I wrote a love song to the Telecaster when I was here in Austin a couple of years ago,” he said. “It was called ‘The Hammer of the Honky Tonk Gods.'”

Kirchen grew up in Ann Arbor, where he went to high school with Bob Seger and Iggy Pop. He didn’t know Seger but says that “Jim Osterberg became Iggy Pop right before my very eyes.” When Iggy was playing with a blues band called the Prime Movers, he was known for singing the blues song, “I’m a man” (“that’s spelled M-A-N”). But suddenly Pop instead started singing, “I’m a tricycle” (“that’s spelled T-R-I…”). That’s when, according to Kirchen, “We knew something was afoot.”

Commander Cody and his Lost Planet Airmen was founded in 1967 in Ann Arbor and the band, which was a pioneer in the country rock genre, went on to become one of the iconic bands of the era. In the beginning, “it was an art school kind of a wacky, admittedly stoned, local Ann Arbor thing. Initially it had a floating cast,” he said. They assigned George Frayne the role of “Commander Cody,” a name that was inspired by a 1950’s film serial. “He had a lot of charisma,” Kirchner says. “He was a big lantern-jawed, barrel-chested, Nick Fury-type of guy. And he played great boogie-woogie piano.”

Kirchen says that Commander Cody “turned on a whole generation of people to country music, to hard core blood and guts country music and Western swing that they did not have access to.” They were playing Western swing, “and then Asleep at the Wheel came along later and did the same thing.”

He says he was attracted to country music because “it had adult themes and, to me, a deeper emotional content. But don’t get me wrong,” he adds. “I’m a big fan of mindless, slack-jawed, ham-fisted rock and roll. It’s a beautiful thing. Seriously, I love it.”

Kirchen is often referred to as a “rockabilly” guitarist. “We certainly did play a bunch of rockabilly,” he says “and I certainly was informed by that, and I know a few rockabilly licks… But I always thought that [term] was a little bit limiting… Especially when rockabilly became in America a kind of … dress-up gig.”

But he definitely is the “self-crowned, self-annointed King of ‘Dieselbilly.'” “I can play anything I want,” he told us, “because I invented the genre…” When he was touring as noted British musician Nick Lowe’s guitar player, “he’d have me do one song a night, and I’d do “Tombstone every Mile,” — a truck-driving song. And he’d introduce me with this fantastic, aristocratic British accent: ‘Ladies and gentlemen, now Bill Kirchen, the King of Dieselbilly.’ And it just stuck with me. I am the King of Dieselbilly.”

Kirchen played several times a year at Austin’s Armadillo World Headquarters with Commander Cody. They recorded a live album at the Armadillo, and were featured at the famed venue’s legendary final show, the “Last Dance at the Dillo.”

Living in Austin gives Kirchen a unique opportunity to work with musicians he respects. “I got to go and sit in a bunch with the great Alvin Crow who I knew back from his Pleasant Valley days, back when I played here with Cody.” And “the Flatlanders live here: Jimmie Dale [Gilmore] and Butch [Hancock]… I used to get to play with them out in California. That’s a fantastic group of original Texans, what a bunch of characters.” And he “just did a gig with [blues pianist] Marsha Ball at the [Armadillo] Christmas Bazaar — who is a treasure.”

He has been touring regularly — and all over the place. “We played Palestine, which was so cool… and we played up in Lapland, north of the Arctic circle. As you can imagine, less happens in Lapland than in Palestine…”

Bill Kirchen closed the Rag Radio show with a song he wrote when he was living in nearby Buda, Texas, before moving to Austin. “I wrote this song when I was walking my dog,” he said. “And you know how dogs are, they’re just happy to be alive. So I wrote a Good to be Alive, song, encouraged by his enthusiasm.” 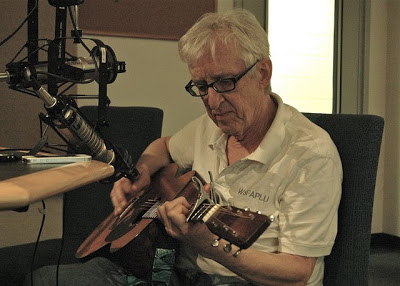