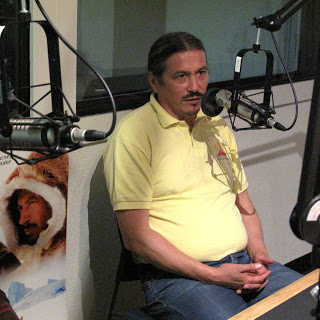 Ole Jørgen Hammeken (above) at an Oct. 27, 2011, taping of Rag Radio at the KOOP studios in Austin. (The show was aired Nov. 4, 2011.) Inset below is filmmaker Marc Buriot. Photos by Michelle Manteris / The Rag Blog.
Inuit Explorer and Actor Ole Jørgen Hammeken & Filmmaker
Marc Buriot on Rag Radio with Thorne Dreyer. Listen to it here:

Our guests on Rag Radio Friday, November 4, were Ole Jørgen Hammeken, an indigenous Greenlandic Inuit polar explorer, social worker, and actor, and French filmmaker Marc Buriot, the executive producer of Inuk, a feature film made in Greenland, in which Hammeken stars.

The story of Inuk is loosely based on the work Hammeken and his wife, Ann Andreasen, have done at their internationally-acclaimed home for disadvantaged children in Greenland. Hanneken uses dogsledding as therapy in working with troubled Greenlandic youth. We discuss the making of the film and the issues it raises about Greenland and its indigenous people — and the inevitable conflicts between their historic traditions and contemporary culture. 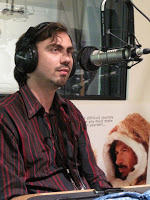 Inuk, made in Greenland by director Mike Magidson and distributed in Europe as Le voyage d’Inuk, has won numerous awards on the global film festival circuit, especially for its majestic cinematography. Here’s a description of Inuk from the Austin Film Festival’s website:

In the beautiful, treacherous wilderness of Greenland, a young Inuit is torn between the lures of modernity and the binding ties of tradition. Sent away from his alcoholic mother and violent stepfather by social services, 16 year-old Inuk is dispatched to a foster home in the far north of Greenland, 800 kilometres above the Arctic Circle. Taken on as a protégé by Ikuma, a grizzled polar bear hunter [played by Hammeken], Inuk embarks upon the annual seal hunt, and with it a unique, bitterly dangerous journey towards manhood.