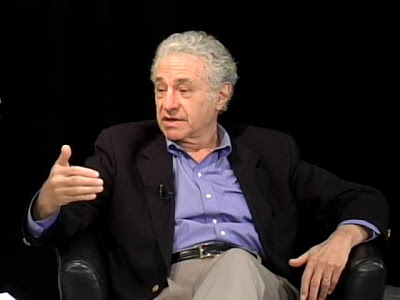 Political economist and historian Gar Alperovitz, author of America Beyond Capitalism: Reclaiming Our Wealth, Our Liberty, and Our Democracy, was Thorne Dreyer’s guest on Rag Radio, Friday, February 3, 2012.

The show can be heard here:

In America Beyond Capitalism, Gar Alperovitz “expertly diagnoses the long-term structural crisis of the American economic and political system and provides detailed, practical answers to the problems we face as a society.” Originally published in 2005, a second edition of America Beyond Capitalism was released in November 2011 by the Democracy Collaborative.

In a February 2, 2012, review in The Rag Blog, Roger Baker said the thrust of Alperovitz’s book is “to describe, document, and analyze the increasing failure of capitalism to deliver benefits to the general public.” Alperovitz emphasizes “that the whole U.S. economic and political system, both public and private, has now become too top-heavy and removed from popular control to be run democratically from Washington.”

Alperovitz, who has a PhD from Cambridge, is the Lionel R. Bauman Professor of Political Economy at the University of Maryland and is co-founder of the Democracy Collaborative. He is the author of a number of critically acclaimed books, and his articles have appeared in The New York Times, the Washington Post, The Los Angeles Times, the New Republic, The Nation, and the Atlantic.

The Rag Blog‘s Roger Baker also participated in this lively and provocative discussion.

[Thorne Dreyer, an influential Sixties underground journalist, was a founding editor of The Rag in Austin and Space City! in Houston. He now edits The Rag Blog, hosts Rag Radio, and is a director of the New Journalism Project. Read more articles by and about Thorne Dreyer on The Rag Blog.]