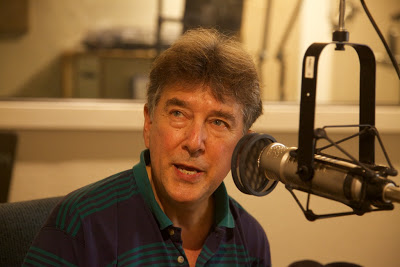 Naishtat, who is Jewish and a native New Yorker, was elected to the District 49 seat in the Texas House of Representatives in 1990 and has been reelected 10 times. Naishtat, who has lived in Texas for 39 years, served as a VISTA volunteer in Lyndon Johnson’s War on Poverty in Queens, New York, and then in Eagle Pass, Texas, before moving to Austin and earning a Masters in Social Work and a law degree from The University of Texas.

Elliott — who was a protégé of liberal Texas State Representative and Senator Gonzalo Barrientos — was a founding board member of the House Progressive Caucus and now serves on the House Services Committee and as Vice Chair of the Public Health Committee. Naishtat, who has focused his legislative work in the areas of health and human services, has passed more than 200 bills and has been recognized for his service by numerous citizens groups.

On the program, we discuss Naishtat’s unique journey from Queens, New York, to the Texas Legislature. VISTA told Elliott they were sending him to San Francisco, but instead he ended up in Eagle Pass (“You know the government. They lied.”) where he worked as a grassroots community organizer in a Mexican-American barrio, helping to set up a Head Start program.

Later, in Austin, when Naishtat first ran for the Texas legislature, his opponent, a three-time Republican incumbent, ran a television ad that was a takeoff on the famed Pace Picante Sauce commercial. A group of cowboys are sitting around a campfire and a voice asks, “Do you want a liberal social worker from New York City? Get a rope!” Naishtat won by 10 percentage points.

Elliott also shares with us the tale of the Texas House “Killer D’s” — 51 Democrats who in 2003 hid out in Ardmore, Oklahoma, in an attempt to halt the Tom Delay-engineered Republican redistricting putsch — with the Texas Rangers and Homeland Security trying to track them down (a tactic that was repeated by Wisconsin Democrats in 2011 when they tried to block legislation limiting collective bargaining for public workers).

We also discuss the 82nd Legislature’s slash-and-burn session and the sad state of health and human services in Texas, and Rick Perry (“Governor Goodhair”) and his campaign for the Republican presidential nomination. And we learn about the late Molly Ivins’ cherished stuffed armadillo, which now resides on a perch in Elliott’s legislative office, “always looking down at me to make sure that I never forget anything I learned from Molly Ivins.” 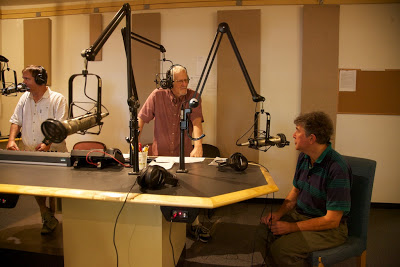 From left, Rag Radio’s Tracey Schulz and Thorne Dreyer, and Texas State Rep. Elliott Naishtat. Photo by Alan Pogue / The Rag Blog.
Rag Radio — hosted and produced by Rag Blog editor Thorne Dreyer — is broadcast every Friday from 2-3 p.m. (CDT) on KOOP 91.7-FM in Austin, and streamed live on the web. KOOP is a cooperatively-run community radio station in Austin.

The running time for this interview, with music and underwriting announcements removed, is 54:23.