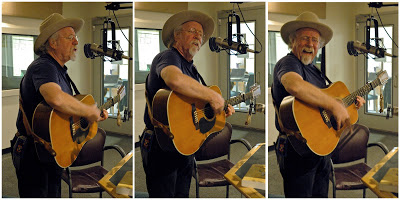 Also listen to Author and Sustainabilty Advocate Ellen LaConte on Rag Radio, Below.

Bobby Bridger, who was our guest on Rag Radio Friday, November 18, 2011, has recorded with Monument, RCA, and Golden Egg Records. He is the composer of the anthem of the Kerrville Folk Festival — “Heal in the Wisdom” — which was Number 3 in a group of 100 Austin songs placed in a time capsule at City Hall.

His newest book is Where the Tall Grass Grows: Becoming Indigenous and the Mythological Legacy of the American West, which “explores the impact of Native American culture on the American psyche…” and on “the development of modern popular entertainment.”

He is also the author of A Ballad of the West, Buffalo Bill and Sitting Bull: Inventing the Wild West, and a biography, Bridger, which famed singer/songwriter Eliza Gilkyson said “reads like an epic poem… as he crosses paths with the icons of modern American music, art, literature, family, and culture,” while “sculpting his own unique artistic expression via the winds of fate, desire, synchronicity, and a large dose of providence.”

Bobby Bridger has traveled the globe performing his historical epic trilogy, A Ballad of the West, as a one-man show. London-based Qube Pictures released a boxed set DVD collection of A Ballad of the West and a 90-minute documentary, Quest of an Epic Balladeer, based on Bridger’s life and work. He has appeared twice on PBS’s Austin City Limits, on PBS’s American Experience, on C-SPAN/Booknotes, CNN, Good Morning America, A&E, NPR, and the Australian Broadcasting Company.

In 1988 Bridger was invited to Oxford University to perform “Heal in the Wisdom” for closing ceremonies of the First Global Forum of Spiritual and Parliamentary Leaders on Human Survival where featured presenters included Nobel Prize winners the Dalai Lama, Mother Teresa, the Archbishop of Canterbury, and astronomer Carl Sagan.

Bridger also is a trained artist and art educator who has painted since age 12; his best known works were inspired by Australian aboriginal “dot” or “dreamtime” paintings. 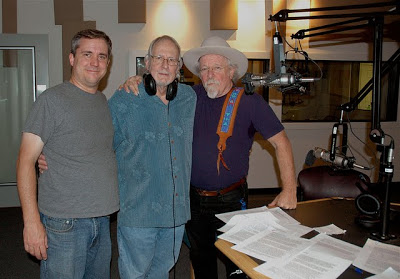 From left, Rag Radio’s Tracey Schulz and Thorne Dreyer with singer/songwriter and author Bobby Bridger at the KOOP studios in Austin, November 18, 2011. Photo by Carlos Lowry / The Rag Blog.
Also listen to Author and Sustainability Advocate Ellen LaConte
on Rag Radio with Thorne Dreyer. Listen to it here:

Ellen LaConte, who was our guest on November 11, 2011, refers to herself as an “independent scholar, organic gardener, gregarious recluse, and freelance writer living in the Yadkin River watershed of the Piedmont bioregion of North Carolina.”

A contributor to The Rag Blog, LaConte is the author of a controversial, widely-endorsed “meta-synthesis” book, Life Rules: Why so much is going wrong everywhere at once and how Life teaches us to fix it. A summary of her philosophy: “The global economy has gone viral. It is ravaging Earth’s immune system, triggering a Critical Mass of mutually reinforcing environmental, economic, social, cultural, and political crises that are compromising the ability of Earth’s human and natural communities to provide for, protect, and heal themselves.”